Cyrus the Unsinkable Sea Serpent by Bill Peet tells the story of Cyrus, a monstrous sea serpent who was not at all fierce. When a shark challenges Cyrus for being a sissy because he doesn’t sink ships, Cyrus goes off in search of a ship to sink. Cyrus finds a ship, the Primrose, but instead of sinking it, Cyrus ends up following the ship and protecting it from many dangers on its ocean voyage.

Cyrus the Unsinkable Sea Serpent by Bill Peet features full-color illustrations by the author. This book is included in our Second Grade Read Aloud Set. 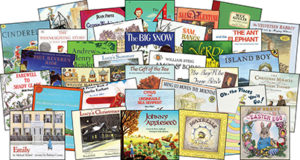