From the publisher:  Considered by some children’s book authorities to be the d’Aulaire’s finest work, this biography of Leif Erickson, son of Eric the Red, best exemplifies the artist’s skill in Norwegian folk art, style, and history. Their well-researched text is lavishly illustrated with Viking rune-like carvings, from the dragon prow of the ship that Leif must hurry to remove, lest it anger the spirits of the land, to the stave churches so unique to Norway. Landscapes depict emerald green fjords against floes of ice and mountains of snow. The grand halls of King Olav Trygvason are ornamented with carvings of Nordic mythical creatures while tame polar bear cubs romp and play. In this setting the young Leif grows to manhood and learns the skills of navigation, sailing his own ship when just a teen from Greenland to Norway. It is on his return journey that he discovers a new land—what we now know to be Newfoundland. Later he sends settlers there—actually establishing a colony. His tale is aptly and authentically told in the d’Aulaires’s inimitable style.

Be the first to review “Leif the Lucky” Cancel reply 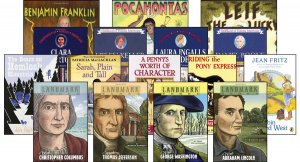