What the Classic Writers Knew That We Have Forgotten by G. K. Chesterton

The highest use of the great masters of literature is not literary;

it is apart from their superb style and even from their emotional inspiration. The first use of good literature is that it prevents a man from being merely modern. To be merely modern is to condemn oneself to an ultimate narrowness; just as to spend one’s last earthly money on the newest hat is to condemn oneself to the old-fashioned. The road of the ancient centuries is strewn with dead moderns. Literature, classic and enduring literature, does its best work in reminding us perpetually of the whole round of truth and balancing other and older ideas against the ideas to which we might for a moment be prone. The way in which it does this, however, is sufficiently curious to be worth our fully understanding it to begin with.

From time to time in human history, but especially in restless epochs like our own, a certain class of things appears. In the old world they were called heresies. In the modern world they are called fads. Sometimes they are for a time useful; sometimes they are wholly mischievous. But they always consist of undue concentration upon some one truth or half-truth. Thus it is true to insist upon God’s knowledge, but heretical to insist on it as Calvin did at the expense of his Love; thus it is true to desire a simple life, but heretical to desire it at the expense of good feeling and good manners. The heretic (who is also the fanatic) is not a man who loves truth too much; no man can love truth too much. The heretic is a man who loves his truth more than truth itself. He prefers the half-truth that he has found to the whole truth which humanity has found. He does not like to see his own precious little paradox merely bound up with twenty truisms into the bundle of the wisdom of the world. 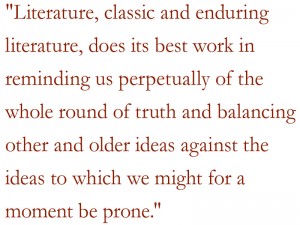 Sometimes such innovators are of a sombre sincerity like Tolstoy, sometimes of a sensitive and feminine eloquence like Nietzsche, and sometimes of an admirable humour, pluck, and public spirit like Mr. Bernard Shaw. In all cases they make a stir, and perhaps found a school. But in all cases the same fundamental mistake is made. It is always supposed that the man in question has discovered a new idea. But, as a fact, what is new is not the idea, but only the isolation of the idea. The idea itself can be found, in all probability, scattered frequently enough through all the great books of a more classic or impartial temper, from Homer and Virgil to Fielding and Dickens. You can find all the new ideas in the old books; only there you will find them balanced, kept in their place, and sometimes contradicted and overcome by other and better ideas. The great writers did not neglect a fad because they had not thought of it, but because they had thought of it and of all the answers to it as well.

In case this point is not clear, I will take two examples, both in reference to notions fashionable among some of the more fanciful and younger theorists. Nietzsche, as everyone knows, preached a doctrine which he and his followers regard apparently as very revolutionary; he held that ordinary altruistic morality had been the invention of a slave class to prevent the emergence of superior types to fight and rule them. Now, modern people, whether they agree with this or not, always talk of it as a new and unheard-of idea. It is calmly and persistently supposed that the great writers of the past, say Shakespeare for instance, did not hold this view, because they had never imagined it; because it had never come into their heads. Turn up the last act of Shakespeare’s Richard III and you will find not only all that Nietzsche had to say put into two lines, but you will find it put in the very words of Nietzsche. Richard Crookback says to his nobles:

Conscience is but a word that cowards use,
Devised at first to keep the strong in awe.”

As I have said, the fact is plain. Shakespeare had thought of Nietzsche and the Master Morality; but he weighed it at its proper value and put it in its proper place. Its proper place is the mouth of a half-insane hunchback on the eve of defeat. This rage against the weak is only possible in a man morbidly brave but fundamentally sick; a man like Richard, a man like Nietzsche. This case alone ought to destroy the absurd fancy that these modern philosophies are modern in the sense that the great men of the past did not think of them. They thought of them; only they did not think much of them. It was not that Shakespeare did not see the Nietzsche idea; he saw it, and he saw through it.

I will take one other example: Mr. Bernard Shaw, in his striking and sincere play called “Major Barbara,”

throws down one of the most violent of his verbal challenges to proverbial morality. People say, “Poverty is no crime.” “Yes,” says Mr. Bernard Shaw, “poverty is a crime, and the mother of crimes. It is a crime to be poor if you could possibly rebel or grow rich. To be poor means to be poor-spirited, servile or tricky.” Mr. Shaw shows signs of an intention to concentrate on this doctrine, and many of his followers do the same. Now, it is only the concentration that is new, not the doctrine. Thackeray makes Becky Sharp say that it is easy to be moral on £1,000 a year, and so difficult on £100. But, as in the case of Shakespeare I have quoted, the point is not merely that Thackeray knew of this conception, but that he knew exactly what it was worth. It not only occurred to him, but he knew where it ought to occur. It ought to occur in the conversation of Becky Sharp; a woman shrewd and not without sincerity, but profoundly unacquainted with all the deeper emotions which make life worth living. The cynicism of Becky, with Lady Jane and Dobbin to balance it, has a certain breezy truth. The cynicism of Mr. Shaw’s Undershaft, preached alone with the austerity of a field preacher, is simply not true at all. It is simply not true at all to say that the very poor are as a whole more insincere or more grovelling than the very rich. Becky’s half-truth has become first a crotchet, then a creed, and then a lie. In the case of Thackeray, as in that of Shakespeare, the conclusion which concerns us is the same. What we call the new ideas are generally broken fragments of the old ideas. It was not that a particular notion did not enter Shakespeare’s head; it is that it found a good many other notions waiting to knock the nonsense out of it.