When you know the notes to sing,
You can sing most anything.

Do you recall these lines from the song “Do-Re-Mi”? In the course of this beloved song from The Sound of Music, the von Trapp children are taught to sing. Of course, actual children could not spring from musical ineptitude to artistic mastery in one afternoon, even if Julie Andrews was their coach. But the principles and process espoused in this scene apply to teaching all music within the Western tradition. So let’s take a closer look.

First, recall that the children were eager to learn to sing. Desire is a critical ingredient in learning, regardless of the subject or skill. Desire may express itself easily, or it may need to be coaxed out from the layers of a child’s reticence. But children are naturally attracted to music. They gravitate to it from their earliest period of life.

Second, the von Trapp children wanted to acquire, not just the musical skills of their governess, but a closer relationship to the woman herself. Her joy in music attracted them as much as the music she made. So a teacher’s projection of energy and excitement can be as important as pedagogical skill. In fact, in the introductory stages of learning music, enthusiasm is more important than technical knowledge.

Third, Maria taught the children music by teaching them to sing. She did not give them instructions in playing the guitar or the piano. Singing provides the primal step in making music, after which every aspect of learning music gets easier.

A child who has difficulty singing on pitch needs assistance, not rejection. The rejection of a child’s singing voice because of an adult’s intention to mold a “better” sound for an ensemble is a cruel thing. Would that same adult brand a child who is slow to read as a person unable to read?

Far too frequently I meet older adults who recall the devastation of being judged “not fit to sing” as a child. These unhappy events tend to happen around third or fourth grade—the very time when children are seeking endorsements of their abilities and crafting their grown-up identities.

Singing is a natural human ability. The fact that a child produces an extensive range of pitches long before forming a first word is not insignificant. Babies in their cradles spend hours experimenting with the acoustics of pitch while also expressing preverbal emotions. 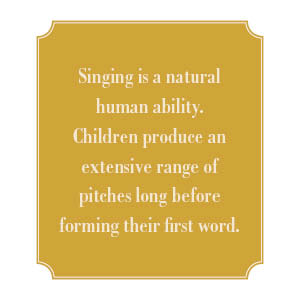 Toddlers quickly acquire a repertoire of actual songs. They want to sing them over and over. Adults hear this as mindless repetition when, in fact, a child is practicing a complex set of skills that require progressive development. Do not hush children when they sing; allow them to sing to (or past) the point of annoyance.

As they practice little songs, children are tackling the five basic elements of Western music: melody (pitch), rhythm, harmony, timbre, and texture, as well as a sixth element applicable to vocal music: text (lyrics). These elements regulate every aspect of music in our Western tradition, from Gregorian chants to Beethoven’s symphonies to popular music of our own day.

In the Western system of music, melody is the prime element. Melody can be defined as a series of pitches linked in a meaningful way. Hearing melody and producing melody come easily for most children. Greater control is required to produce and sustain the next element: rhythm.

Yet rhythm is the first aspect of music that every child learns—in utero! We spend the first nine months of our lives in an acoustical environment ruled by the regular beat of our mother’s heart. Consequently, a child’s excitement about rhythm, expressed by clapping, tapping, jumping, and dancing, is hardly a frivolous instinct.

Harmony is one of the glories of Western music. While Maria was teaching the von Trapp children the pitches of the scale (do, re, mi, etc.) she was teaching them not just melody, but the ingredients of the musical alphabet used to create harmony.

Does a child realize this harmonic progression, intellectually? Of course not. But the child does respond to the shifting of harmonies outlined by the melody. Later in life that child can learn the official names and see how these chords fit within the acoustical system we call music theory.

The final two elements of Western music, also demonstrated in “Do-Re-Mi,” have the names timbre and texture. Timbre refers to the sounds produced by different instruments or voices. Maria had three types of timbre available as she taught “Do-Re-Mi”: first, the individual voices of the children; second, the division between the high voices of the little boy and the girls, and the more mature voice of the older boy. Plus, she had her own adult woman’s voice, more powerful and richer than any of the children’s voices.

But the strongest musical moment of the scene comes from her clever use of texture. Texture involves the way composers simultaneously combine linear elements (such as melody). Try to remember the first time you experienced the singing of a round, especially within a large group, be it “Row, Row, Row Your Boat” or another round. Probably your ears were surprised to hear how lush a single melody becomes when sounded against staggered versions of itself.

But Maria went a step further when she ended the song by singing a slower melody (counter-melody) to the words “When you know the notes to sing,” placed above the children’s voices (“do-mi-mi, mi-sol-sol, re-fa-fa, la-ti-ti“), giving us one of the finest moments of the whole musical.

Few things light up a child’s eyes more than singing. Let singing start your days, whether as a spontaneous “tra-la-lah“—off pitch or not—or in a gradually implemented program of singing songs together. Set aside your own doubts and fears. Open up your heart to the joy that only singing can bring.