Several years ago, a killer whale at the Orlando Marine Park drowned his trainer. Tilikum, the whale, made national headlines by dragging Dawn Brancheau, his young female caretaker, by her ponytail underwater to her death.

And it wasn’t the first time. It was, in fact, Tilikum’s third such indiscretion, giving him a rather unattractive personality profile. It was surely the kind of thing that would have doomed the prospects of anyone else applying for a job in a marine park.

A public debate about what to do with Tilikum ensued. Some called for the creature to be euthanized, as is often done with animals who become violent with humans. Asian tigers were once tracked down and shot when they acquired a taste for human flesh, and to this day, even some zoo animals who decide to dine on visitors are put out of their man-eating misery.

Others argue that the whale, being an animal, did not understand what it was doing and could not, therefore, be held responsible for his actions.

“What,” asked one observer, “made Tilikum snap?” They combed through the available evidence—which included the fact that orcas are large, violent marine predators who run in packs and hunt down their prey in the ocean, systematically ripping them apart with their sharp teeth (starting, in the case of other whales, with their tongues)—and came to a definitive conclusion:
They are “complicated creatures.”

According to Bernd Wursig, a professor of marine biology at Texas A&M University, Tilikum’s behavior could have been the result of the mammalian version of a bad hair day. (Mammals, after all, are partly defined by the fact that they have hair.) Tilikum may, he says, have been “lashing out”: “Even though whales are bright and very well trained, they can show aggressivity if they feel threatened or if they’re in a bad mood,” he said. “It can also be displacement, if they haven’t had a good time with their pod members.”

There you have it. “Aggressivity.” Caused by a killer whale party gone sour.

If I were a large, bloodthirsty mammalian predator with a record (and the first name “Killer”), I would want these people on my side.

Should Tilikum have been killed? This was the question that everyone was asking. But it was a question that could not be answered until another question was settled.

What really was at issue here was whether there was a fundamental difference between human beings and animals. If Tilikum were human, then fine—kill the fish. But if he was an animal, how could he be held responsible for what his animal nature drove him to do? Gnawing on your personal trainer may not be an attractive human trait, but it’s the kind of thing that, if you are a killer whale, will have your friends in the pod chest-bumping and doing high-fives.

How can you punish a creature for doing what it’s supposed to do?

The classical conception of man considers him to be different, not just in degree, but in kind, from the beast. To the Greeks, man was a “rational animal.” This was not a judgment about his biological nature or origin: it was a metaphysical statement about what he essentially is. The Christian view of man—which, as in so many other things, was larger and more comprehensive than the worldviews that preceded it—incorporated the Greek view into its own idea that man was animal with a rational soul, an endowment he enjoyed by virtue of bearing the image of God.

Traditional logic students learn this basic understanding of the nature of man in the first few weeks of a logic course.

One of the first things students who study traditional logic encounter is something called the “Porphyrian Tree.” The Porphyrian Tree was a sort of medieval flowchart showing the divisions of anything that objectively exists.

In short, the Porphyrian Tree is an outline of the complexity of being of all things, from the simplest things on top, to the most metaphysically complicated thing (Man) on the bottom.

The fate of Tilikum (or any other animal in the dock for crimes against humanity) is an easy decision once the distinction between man and beast is taken into account.

So what does all this bode for Tilikum?

In the classical conception of the world, each nature had its own unique purpose. The Greeks believed that the proper action for anything was determined by its inherent telos (its end or purpose). This was, in fact, the basis of all classical and pre-modern Christian ethics. An act was right or wrong on the basis of whether the action helped or hindered the process of becoming a more ideal human being—whether it contributed or detracted from a man achieving his purpose.

So here we have a creature that was designed by its Creator for roving the world’s oceans, eating everything in its path. Think about it: If you were a killer whale and someone captured you and put you in a tank (which to you is the equivalent of a moderate-sized bathtub), and forced you to perform tricks, among which is having humans stick their heads in your mouth, what would you do?

If I’m the whale, I’m biting the head off—and no court of rational animals in the land should convict me.
The trouble is that there are otherwise intelligent people, unhampered by a knowledge of the Porphyrian Tree, who think that there is no fundamental difference between animals and humans. The understanding of this difference is, in fact, the basis for human right—and the confusion about it is the basis for the animal rights movement.

Well, it turns out we don’t have to wait. In 2008, the Weekly Standard ran an article about a Swiss government ethics panel that ruled that plants, too, have “dignity,” and that the “killing of flora is morally wrong.” The article’s title captured the full moral gravity of this new movement: “The Silent Scream of the Asparagus.”

It just goes to show the consequences of not making important logical distinctions. We should remember that the next time plants go killing people. I’m thinking of hemlock here. 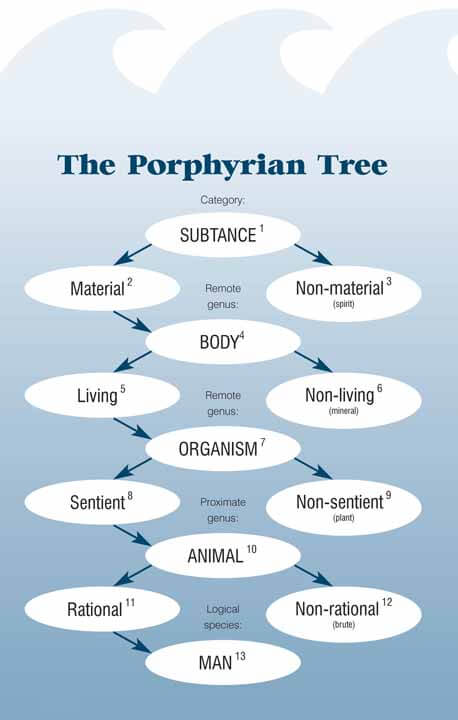