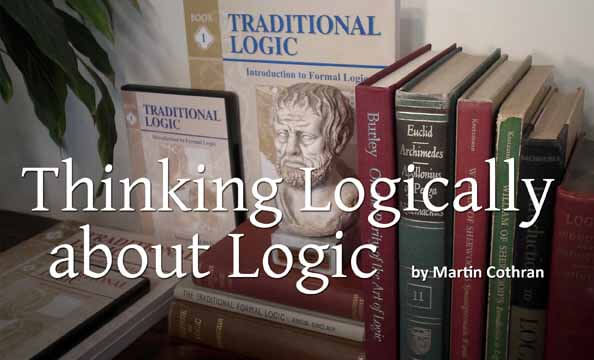 You’ve heard the word before, but what does it mean? Here’s the lowdown on the second leg of the trivium.

The best way to answer the question “What is logic?” is with a definition. But that is easier said than done. Throughout history, many people have thought and written about the subject of logic, and many people have offered definitions. Some of them are useful and some are not.

Josiah Royce, an American philosopher, defined logic as “the science of order,” but this definition is so general that it really could include things outside of what we would properly call logic, and so it really doesn’t tell us much.

Other definitions are a little too simple. The writer Oliver Wendell Holmes said, “Logic is logic. That’s all I say.” That obviously won’t help us.

The writers of a book on fallacies defined logic as “the defense against trickery.” That’s one thing logic is, but certainly not all.

Much better is the definition given by Raymond McCall: “Logic in general is the science of right thinking.” Jacques Maritain, a very famous philosopher, had a similar definition: “Logic,” he said, “studies reason as the tool of knowledge.”

Irving Copi, who wrote a book on logic still used in many colleges and universities, gets even a little more specific: “The distinction between correct and incorrect reasoning is the central problem with which logic deals.” As you proceed in this book, you will see that this is so.

Where does Logic fit in?

The two main branches of logic, one called formal or minor logic, the other material or major logic, are quite distinct and deal with different problems.

Material logic is concerned with the content of argumentation. It deals with the truth of the terms and the propositions in an argument.

Formal logic is interested in the form or structure of reasoning. The truth of an argument is of only secondary consideration in this branch of logic. Formal logic is concerned with the method of deriving one truth from another.

The distinction between these two branches of logic was nicely described by G. K. Chesterton:

Logic and truth … have very little to do with each other. Logic is concerned merely with the fidelity and accuracy with which a certain process is performed, a process which can be performed with any materials, with any assumption. You can be as logical about griffins and basilisks as about sheep and pigs … Logic, then, is not necessarily an instrument for finding out truth; on the contrary, truth is a necessary instrument for using logic—for using it, that is, for the discovery of further truth … Briefly, you can only find truth with logic if you have already found truth without it.

This last remark of Chesterton’s is important. It is not the purpose of formal logic to discover truth. That is the business of everyday observation and, in certain more formal circumstances, empirical science. Logic serves only to lead us from one truth to another.

That is why it is best to study formal logic first. In formal logic you study the form of an argument apart from or irrespective of its content, even though some content must be used in order to show the form. Maritain put it this way:

One of the most recognizable characteristics of deductive arguments is that they argue from the general to the specific, or from the more general to the less general, by way of a middle term. Inductive arguments, on the other hand, reason from the specific to the general, or from the less general to the more general and have no middle term that firmly connects one truth to another. Deduction relies on the acceptance of a general principle and reasons from that general principle through an iron chain of reasoning to a conclusion. Induction reasons from repeated particular observations (which are usually observable) to more general truths through statistical generalizations and analogies which are sometimes unobserved (and which are considered stronger by virtue of the number of confirming instances that are appealed to in the premises).

This distinction—between deductive and inductive reasoning—is often misunderstood in common language. Arthur Conan Doyle, for example, has his character Sherlock Holmes refer to his own style of reasoning as “deduction,” when, in fact, Sherlock Holmes is not notable for his deduction, but for his induction. Holmes reasons from particular observations to more general conclusions.

There are several major systems of formal deductive logic: the first is traditional or syllogistic logic; the second is modern propositional logic; and the third is modern predicate logic. Traditional logic concerns itself with the relationships between terms in an argument, using the “to be” verb (am, is, or are) as the connector. An example would be:

This argument deals with the relationships between and among the terms “men,” “mortal,” and “Socrates.”
Modern propositional logic deals with the relationship between propositions in an argument without taking the interior structure of the statements into account. It uses logical operators such as “if … then,” “and,” “or,” “only if,” or “if and only if” as the connectors. An example would be:

In this article, we are concerned primarily with traditional syllogistic logic.

Validity is the term we use when we mean to say that an argument is logical. The term “soundness,” however, is a term that refers both to the form and the content of an argument. It is applied to an argument to say something about both its truth and its validity.

Truth means the correspondence of a statement to reality. An argument is valid when its conclusion follows logically from its premises. The term soundness is used to indicate that all the premises in an argument are true and that the argument is valid.

An argument can contain true premises and still be invalid. Likewise, it can be perfectly valid (or logical, if you prefer) and contain false premises. But if an argument is sound, its premises must be true and it must be valid.

The Components of an Argument

An argument contains several components. In order to illustrate what these components are and how they work in the reasoning process, let us begin with a simple argument:

On the face of it, this argument contains a number of words making up three statements which fit together into what looks and sounds like an argument. But there is more here than meets the eye.
In formal logic, we recognize three kinds of logical processes. We recognize that each of these originates in a mental act, but that each also manifests itself as (and is known to us in the form of) a verbal expression.

At the point of simple apprehension, we do not affirm or deny anything about it. We just possess or grasp it.

If in your mind, for example, you think of your computer (the one you’re using right now), you are performing this first logical process. You are having a simple apprehension. And if you speak or write anything about it, you will have to use a term, the term “computer.”

It is at this point that we are said to make progress in knowledge. It is through the process of deductive inference, as expressed in a syllogism, that we can say, as we explained above, that we have gone from one truth or set of truths to another truth.

We would say that the argument above (the one about Socrates), in its entirety, is a syllogism. It expresses a deductive inference that logically connects certain simple apprehensions that are parts of three judgments. And this process has been expressed in the form of a syllogism.

If we now put this all together, keeping our distinction between mental acts and verbal expressions, it would look like this:

In order to give ourselves a mental picture of these three logical processes, let us think of a man walking. In order to get from, say, one room to another, he has to pick up his foot and take several steps in order to get to the room that is his destination. The initial act—picking up his foot—is like the initial logical act of simple apprehension. Taking a full step is like making a judgment. And stringing all the steps together into one movement is like deductive inference—we move from one place to another.

We started out by defining logic as “the science of right thinking.” We said logic was one of three divisions of philosophy, the others being theoretical philosophy and practical philosophy. We said there are two main branches of logic, one called formal or minor logic, the other material or major logic. Material logic is concerned with the content of argumentation, while formal logic is interested in the form or structure of reasoning.

We said also that all arguments must contain two premises and a conclusion. And we said, finally, that there are three mental acts that make up the logical process: simple apprehension, judgment, and deductive inference. These three mental acts correspond to three verbal expressions: term, proposition, and syllogism.