I don’t remember the time or the day I heard it. I have no recollection of the person who read it to me or the place in which it was read. I assume it to have been my mother, but I don’t
know that. It is one of the many things whose mental origins are lost in my primordial past, but there it is, as clear and plain as the day I first learned it:

Hey diddle, diddle!
The cat and the fiddle,
The cow jumped over the moon;
The little dog laughed
To see such sport,
And the dish ran away with

It is of no possible use to me, and presumably was not read to me because it might be. But I learned it before I could know what it meant, and I will remember it until the day I die.

Certainly I have learned many other things on the long road of life that would seem to be far more important and useful, and yet I can’t remember any of them half so well. Of what possible purpose could it serve? Does it convey any real information? Is there anything a child could conceivably gain from chanting it—or an adult from having chanted it when a child? Looking at it now, I’m not even sure what it means or why anyone would have thought it up in the first place.

“Hey, Diddle, Diddle,” “The Owl and the Pussycat,” “Lobster Quadrille,” “Green Eggs and Ham“—they all have the same mystical character of things that cannot be explained. Why is it that we never question the value of these things? And why do we simply pass them along from one generation to the next, unthinking?

If we consider much of the traditional literature of childhood, we see the same character everywhere—that of seeming senselessness. In fact, we have a name for the entire subspecies of children’s literature in which this characteristic is the most pronounced: We call it nonsense literature. Many nursery rhymes are of this type.

They seem to have bubbled up in the English imagination from some fathomless cultural source, but there are a few of them whose origins we can easily trace.

There is a documented history of their production. We know that “Tom Thumb” was the first proper children’s story. We know that the origin of Mother Goose as the patron saint of this literature was probably the work of Oliver Goldsmith who, in the late eighteenth century, wrote a book called Mother Goose’s Melody. And we know that it was John Newbery, he whose name now graces the most prestigious award for children’s literature, who published it.

The authorship of most nursery rhymes is unknown, except for the obvious fact that many of them were likely conceived by those who cared for children: In other words, nursery rhymes are likely the creation of nurses.

But these are mere facts, and they tell us little of the nature of these curious creations.

Of those works of nonsense whose authors we know, there are a few prominent names. The greatest and best known practitioner of nonsense was Edward Lear:

There was an Old Man with a beard,
Who said, “It is just as I feared!—
Two Owls and a Hen, four Larks and a Wren,
Have all built their nests in my beard!”

Lear was the master of the humorous limerick, but wrote longer poems as well: “The Owl and the Pussycat,” “The Pobble Who Has No Toes,” ” The Pelican Chorus,” “The Quangle Wangle’s Hat,” and, of course, “The Jumblies.” 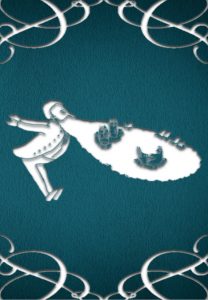 Lear had a number of gifts that lent themselves perfectly to the art of nonsense. He could name a nonexistent thing so perfectly as to seemingly call it into existence. Who or what the Jumblies actually are, for example, he never says. We have only this inadequate description:

Far and few, far and few,
Are the lands where the Jumblies live;
Their heads are green, and their hands are blue,
And they went to sea in a Sieve.

As far as morphologies go, this is not much to go by. And yet, from it we can see the Jumblies as clearly as anything that exists in this world.

That such fantastic realities could be conjured may say something about the unique powers of our language. But whatever these powers are, Lear was their master:

There were no such things as Bong-Trees until Lear spoke them into existence. And so far as we know, no Owl and Pussycat have ever been supplied with a marriage ring by a Pig (or, moreover, been married by a Turkey that lives on a hill).

The lines are colorful and vivid, but it is the effortlessness with which Lear casually mixes the commonplace with the outlandish that gives them the air of reality.

The “Torrible Zone,” the “Chankly Bore,” and “the great Gromboolian plain” are a few of Lear’s other creations. Nobody has ever located them, but they sound so legitimate that we are tempted to attribute our ignorance of them to the fact that they have yet to be discovered. Neither has anyone ever heard of a “runcible spoon,” but, whether it exists or not, Lear convinces us somehow that it is the perfect utensil for the eating of mince (and slices of quince).

Lear is joined in the pantheon of nonsense writers by others, most notably Dr. Seuss, who created his own improbable but compelling world. What is it about this literature that has caused us to take the time and bother each generation to hand it on to the next?

The world of make-believe has, as its culmination, the fairy tales of the Grimms, Perrault, and Andersen, but “it is Mother Goose,” says John Goldthwaite in his book, The Natural History of Make-Believe,

who first introduces us to who we are in the world …. Our
infant imaginations are jollied awake as she translates
the toes on our feet into pigs going to market, sends
a cow over the moon, and tucks the world’s biggest
family into bed in a shoe. 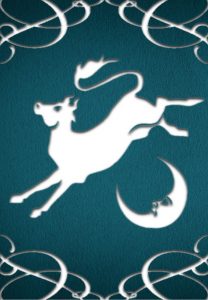 The most significant quality of this literature is its freshness. Its extravagance makes us continually see the world as if it were new. Says Goldthwaite,

There is an accidental charm to stuff extracted from the world. Put enough of it between the covers of even a small book and something felicitous happens. Out of apparent chaos the world reappears. There is nothing to Mother Goose but random snatches of silliness, and yet it is all here: cast, history, scenery, weather, the piecemeal world somehow arguing itself whole again in song.

It was J. R. R. Tolkien (himself no mean writer of children’s literature) who conferred upon man the title of “subcreator.” As creatures created in the image and likeness of God, our natures yearn to create. But since we cannot (as is God’s sole privilege) really bring something from nothing, we are left with merely bringing something from something. It is the quintessence of true art that it looks as if it had been conjured ex nihilo.

How does God create? According to the first sentences of Genesis, He does it by giving form and content to chaos. This is the character of nonsense and nursery rhymes: They take a seeming chaos of facts, and put them together in a new way that is hard to imagine anyone could have thought of—through the magic of poetry.

These nursery rhymes and nonsense lyrics collect the seemingly chaotic content from the mundane world around us—cats, cows, dishes, dogs—and, in imitation of the first chapters of Genesis, meld them together and give them a new shape through words—and not just any words, but the musical words of poetry. We do not have the ability to create ex nihilo, but through the godly gift of language—particularly poetic language—we can create a semblance of the first few moments of the world. We can make reality dance.

What poetry does is to help us see the original creation again through the subordinate magic of our own subcreation. Goldthwaite again:

The mind is stubborn in its need for order. Upset its expectations with a spiel of gibberish and, like a turtle looking to right itself, it will seek the stability of meaning every time. Nonsense might be defined more accurately as a flirtation with disorder, a turning upside down of the world for the pleasure of seeing it come right side up again.

G. K. Chesterton argues that nonsense verse and fairy tales clear away the existential debris of life that obscures our view of the actual wonder of reality. By taking the ordinary things of this world and casting them into new juxtapositions that are no less strictly logical and orderly than things as they are, we see the real magic in the things that we have become blind to through familiarity. We recapture what he called the “ancient instinct of astonishment.” He said of fairy tales that they

say that apples were golden only to refresh the forgotten moment when we found that they were green. They make rivers run with wine only to make us remember, for one wild moment, that they
run with water.

The world is best viewed, he once said, by standing on one’s head. It is the same world, only seen from a new and different perspective.

The man in the moon
Came down too soon,
And asked his way to Norwich;
The man in the south
He burnt his mouth,
With eating cold plum porridge.

Nonsense verse is a pure reenactment of creation that is—through a trick of language—available to us in this mortal existence. As human beings created in God’s image, we have an innate desire for order precisely because we have an innate desire for existence. To see the original ordering act redramatized before our eyes by the magic of musical words provides us with a glimpse of the primordial joy that must have been the angels’.