Stephen Hawking once pronounced that he thought his brain was little more than a computer and that, because of this, he was unafraid to die: “I regard the brain as a computer which will stop working when its components fail. There is no heaven or afterlife for broken down computers; that is a fairy story for people afraid of the dark.”

Hawking, a famous physicist who died in March, demonstrated by remarks like these the irrational lengths to which some are willing to go in order to deny that God exists and that He is the ultimate explanation of the world.

Not long before Hawking made these remarks, he made another pronouncement:

M-Theory predicts that a great many universes were created out of nothing. Their creation does not require the intervention of some supernatural being or God. Rather these multiple universes arise naturally from physical law.

What Hawking never explained was why the theory that there are multiple universes is any more rational an explanation than that God created the universe. Nor did he explain why one possibility necessarily excludes the other.

The Oxford mathematician and philosopher John Lennox comments on the natural law out of which Hawking says these multiverses arise:

[Hawking] asks us to choose between God and the laws of physics, as if they were necessarily in mutual conflict. But … laws themselves do not create anything, they are merely a description of what happens under certain conditions.

What Hawking appears to have done is to confuse law with agency. His call on us to choose between God and physics is a bit like someone demanding that we choose between aeronautical engineer Sir Frank Whittle [who invented the turbojet engine] and the laws of physics to explain the jet engine.

Hawking’s position betrays a reductionist view of reality, something C. S. Lewis called “nothing buttery”—the idea that something must only be this, or only that, when, in fact, reality does not work that way.

Why is Multiverse Theory Any Less Fantastic Than the God Hypothesis? 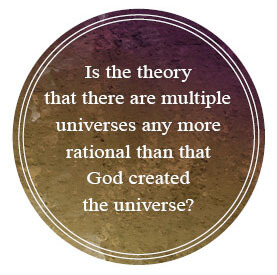 The second problem is that there are a lot of questions about whether multiverse theory is any less fantastic than the God theory. Scientists are constantly invoking the principle of “Occam’s Razor”: the idea that the simplest theory is the best one. But if you want to make the argument that multiverse theory is simpler than the God hypothesis, then you’re going to have to explain why the God hypothesis, which is simple enough to be readily understood by the common person, is superior to the multiverse theory, which is so complicated that only highly trained physicists seem to really understand it.

Another physicist, Paul Davies, points out that cosmologists envisage

sweeping “meta-laws” that pervade the multiverse and spawn specific bylaws on a universe-by-universe basis. The meta-laws themselves remain unexplained—eternal, immutable transcendent entities that just happen to exist and must simply be accepted as given. In that respect the meta-laws have a similar status to an unexplained transcendent god.

Is Multiverse Theory Scientific At All?

The third problem is the status of multiverse theory as science. In fact, all of the things we are told science should do—be observable, be testable, and have predictive power—are absent to a large degree from multiverse theory. In other words, there is not only a question as to whether this scientific theory can explain God away, but there is a debate about whether the theory is scientific at all.

is that, as of this writing, there is no experimental evidence that hidden dimensions or alternate universes exist. There might, indeed, be a multiverse and I like alternative universes as much as the next science fiction groupie. … Still how much effort do we put into explorations based on the potentially unobservable while shifting away from the tradition of exploring only the actual?

In fact, it is precisely because such theories are inadequate as scientific theories that they have to be jerry-rigged with extra-scientific assumptions to make them work at all.

This has happened in string theory, another unverifiable scientific hypothesis. Frank points out that string theory is one of the theories employed to explain quantum gravity. But, as it turns out, string theory cannot do this in a world of only four dimensions. So what do its proponents do? They posit six other equally unverifiable dimensions in order to salvage their theory, giving us ten in all.

It could be argued that the Oldest Theory of How the Universe Got Here (that God created it) involves far fewer intellectual contortions than this.

But even the scientists who acknowledge the problems with multiverse theory still have trouble explaining God away. Physicist Sean Carroll tries to salvage the atheist project by saying that you don’t have to posit other universes in order to dispense with the necessity of God:

You could imagine an understanding of the universe—why it came into existence—without ever leaving the laws of nature—without ever invoking some divine, some supernatural being. The universe could just obey its own laws. It could be a natural, physical, real universe, obeying the laws of physics, and that can be a complete explanation of everything.

But natural laws must themselves be explained, a point that has apparently never occurred to Carroll. In fact, he goes further than Hawking seems himself to go: “The question ‘Why is there something rather than nothing?'” Carroll says, “has been answered.”

It has? How exactly do you answer the question of why there is something rather than nothing by simply pointing to something (which is what he and other physicists do by positing an ostensibly empty space that is filled with fields and forces)? Lewis once asked how someone could say anything about anything outside nature “by simply studying nature?”

In fact, the question “Why is there something rather than nothing?” is simply not a scientific question; it is a philosophical question.

It’s a bad mistake to confuse the two, since science and philosophy are two entirely different universes.