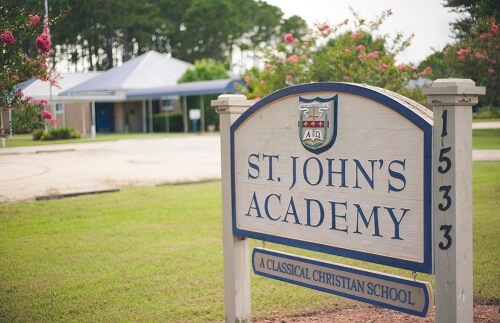 St. John’s Academy, which is located on a little country road in beautiful St. Augustine, Florida, celebrates its twentieth anniversary this year. The school is now a fully accredited member of the Classical Latin School Association.

The independent, inter-denominational school has, like many small Christian schools, struggled during economic hard times. But in recent years, the school has thrived through the generosity and sacrifice of its families and faculty. “We are determined to uphold the vision of classical education and not be blown about by the wind,” says Headmistress Wallis Brooks, “or by every new trend that presents itself as the latest and greatest.”

Mrs. Brooks is the founding headmistress of the school and has seen it through bad times and good. She points to the accomplishments of the school’s graduates as evidence of the contribution the school has made to their lives. “I am forever grateful for the training I received in thinking critically and accepting challenges presented to me,” says one pre-med student. “I am always so proud to see the way my daughter handles herself in a group of adults,” says a proud parent of one graduate. “When we sent our Visiting Team to the school as part of our accreditation process,” said CLSA director Martin Cothran, “they reported back what I have seen there repeatedly: a strong classical Christian curriculum, a beautiful campus, devoted staff and teachers, and students who are eager to learn.”

“We are honored,” said Cothran, “to be associated with a school of the quality of St. John’s.”