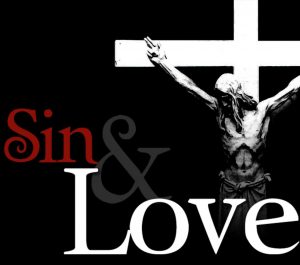 How Poetry Helps Us Fathom the Unfathomable

You’ve probably noticed that it can be difficult to explain why some things are true or obvious—like common sense, your grandmother’s wisdom, the distinct feeling of Sunday mornings, that you have a soul, or why your child should play outside rather than stare at a screen.

This is so because we apprehend more than we comprehend. Yet the wider popular and scientific culture often try to diminish or discredit such “intangibles.” And when it comes to profound metaphysical realities such as beauty, sin, or love—they chop or reshape them according to the strictures of reason and materialistic analysis. For example, it took me .37 seconds on Google to find a PBS NewsHour article from 2009 called “Love is a Chemical Reaction, Scientists Find.” I particularly enjoyed the “revelatory” sentence in the first paragraph: “the neurobiology that underlies pair bonds—what nonscientists might call love.”

Might I be so bold as to recommend that we turn to poetry instead of a machine to sound the depths of love? Take a moment now to read George Herbert’s poem “The Agony” (below), and then return here to see how poetry confirms our apprehension, expands our reason, and enlarges our faith and understanding.

In relatively few lines, Herbert offers a rich reflection on the immense realities of Sin and Love through imagery, imagination, and metaphor— locating them in the agony of Christ—for only in the blood of sorrowful Passion and salvific Communion are the ineffable abstractions fully realized.

The opening stanza presents the primary contrast in the poem between two kinds of knowledge. The first is that of the worldly “philosophers” who embody the standard empiricist-rationalist means to knowledge (what has, since Herbert’s time, become the increasingly dominant mode). They “measure” and “fathom” the physical world—its mountains and seas, its states and kings. They calculate and quantify, seeking scientific and informational knowledge that controls, dominates, and aggrandizes. With their worldly intellect, they even (ironically) ascribe themselves prophetic power—as they “walk with a staff to heaven.”

The image has multiple connotations. The staff might suggest their bid for power over the physical world, as Aaron’s miraculous staff held power in the plagues. Or perhaps it is Prospero’s magic staff in The Tempest; or Jacob’s staff, used in astronomy and navigation to calculate and measure angles and distances. (Its long history can be traced from Herbert’s time as far back as the patriarch Jacob and his staff mentioned in Genesis 32:10.)

The other kind of knowledge—poetic and spiritual knowledge—is introduced in line 4 of the first stanza and carries through to the end of the poem. In a meta-poetic way, perhaps poetry is the form needed to fathom “vast, spacious things.”

After all, Herbert’s candid (mildly satiric) treatment of the first kind of knowledge slips through in his diction—the ambitious philosophers receive the confident, vigorous verbs measured, fathomed, and walked. But the spiritual seekers, the readers whom Herbert addresses in the poem, receive the simple, humble verbs in the subjunctive mood: “let him repair” and “let him assay.”

This is Herbert’s means of delineating the meek and spiritual attitude of heart and mind necessary to know more fully. He invites us, “Who would know Sin”—yet this is not to “know” in the reductionist way of the philosophers, but rather to understand. By calling us to think poetically and imaginatively, he will lead us from worldly knowledge unto spiritual wisdom. 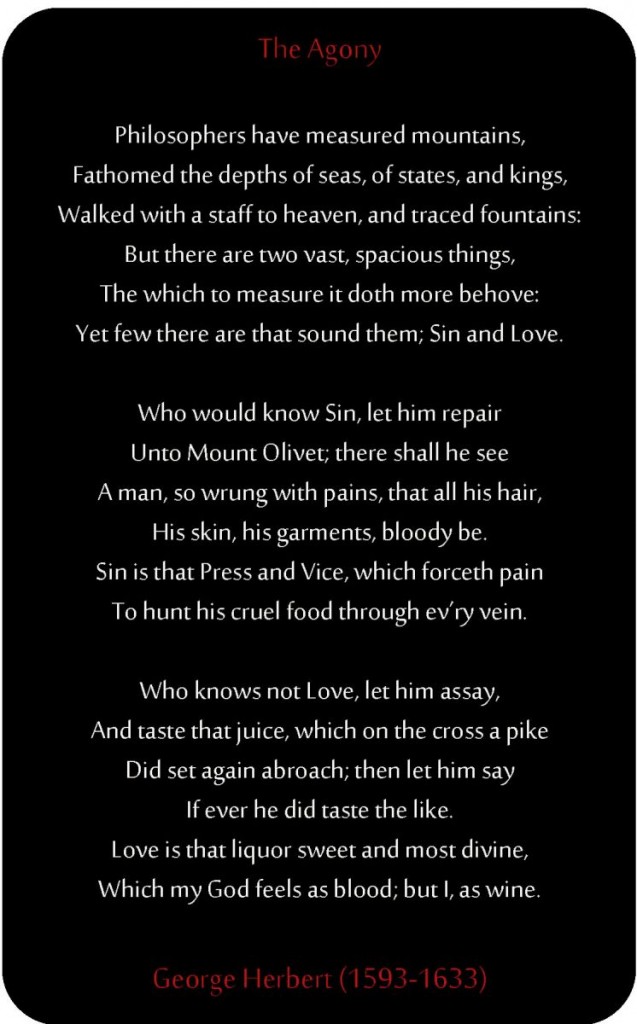 “Who would know Sin, let him repair” bids us to travel to the Mountain of Olives on the edge of Jerusalem, used for a Jewish cemetery for over 3,000 years. And what do we visualize on this mountain of death? Christ (not accidentally in the center point of the poem):

so wrung with pains, that all his hair,
His skin, his garments, bloody be.

Herbert prods us to imagine Christ in the Garden of Gethsemane as he prays and reflects upon his imminent passion. Yet in this image, Christ is already stained and bloodied, well before his passion—Christ’s spiritual agony has subsumed his yet-to-happen physical agony. In this paradox, time is transcended—at once fully realized, yet still to come. In like manner, through poetic imagination, our way of knowing is enlarged and transformed, able to transcend the narrow limits of reason. The inner eye of the heart, which sees both into and beyond things, is opened.

At the close of stanza 2, Herbert appropriates the imagery and allusion of the wine press: “Sin is that Press and Vice.” The mystical imagery of the winepress comes from Isaiah 63:3:

I have trodden the winepress alone,
And from the peoples no one was with Me …
their blood is sprinkled upon My garments,
And I have stained all My robes.

In this stanza, we see the image of the sacrificial Christ, the treader of the grapes, who will be crushed by the vice press, whose bloody wine will be poured out for all. Paradox abounds here, for sin is the press which crushes Christ into wine, as he bears the world’s sin through his passion.

With a flash of I Corinthians 13, the poem’s final stanza ends in Love. For love, after all, is greater than sin. We are asked, imaginatively, to taste the blood-wine which flows from Christ, the outpour from the pike piercing his body as it might “broach” a barrel of wine. The synesthetic tasting stirs our senses to the wonder of the Eucharist: He is the Love, that liquor sweet and most divine; we are the Sin He feels as blood, by grace we taste as wine—the poetic possibility of knowing truth and being saved.