The REAL Reason Our Educational Elites Don’t Like Grammar

In Leo Tolstoy’s great Christian novel Anna Karenina, an after-dinner conversation turns to the subject of which European nation is more civilized—the English, the French, or the German. Karnenin, Anna’s husband, asserts that that civilization is most influential which is the most “truly educated.” However the assertive Pestsov, another guest, asks Karenin, “But what should we consider to be the signs of ‘true education’?”

It is 1870, or thereabouts, and the phenomenon of “modern education” has only just dawned on the consciousness of the class of people that tend to populate Tolstoy’s novels—the ruling aristocratic upper class.

“I see no clear poofs that a classical education should be preferred to a modern education,” says Pestsov. He argues that a purely scientific education has just as great an “educational and mind-developing influence.”

“I can’t quite agree with you,” answered Karenin:

It seems to me that we must admit that the process of studying the forms of a language has in itself a beneficial effect on spiritual development. Besides it is impossible to deny that the influence of the classics is in the highest degree a moral one, whereas unfortunately with instruction in natural science are connected those dangerous and false teachings which are the bane of the present times.

At this, another dinner guest, Koznyshev, intervened. The question of what “true education” is would be a difficult question, he suggests, “had there not been on the side of classical education that advantage which you [Karenin] have just mentioned: the moral advantage, … the anti-nihilistic influence.”

When Karenin refers to “studying the forms of language,” he is clearly referring to grammar. Grammar is the formal study of language. What is interesting is that some eighteen years later, the philosopher whose name is associated most closely with nihilism, the atheist Friedrich Nietszche, adds his own spin on this conversation about this formal aspect of language.

“I am afraid we have not gotten rid of God,” says the great nihilist philosopher, “because we still have faith in grammar.”

In other words, even the modern era’s most prominent atheist, like the Christian characters in Tolstoy’s after-dinner conversation, recognized that the very foundations of grammar were spiritual and moral, and that the rejection of grammar is inherently nihilistic.

Why should this be?

Nietzsche makes his remark about grammar in the context of his indictment of Western philosophy in general. He believed that Western philosophers since Socrates had been taken captive by what he calls the “prejudice of reason”—the idea that there is an objective and rational metaphysical order that underlies reality. It was the idea that underlay the traditional belief that things in this world had meaning and purpose and that we ignored this order at our cultural peril. 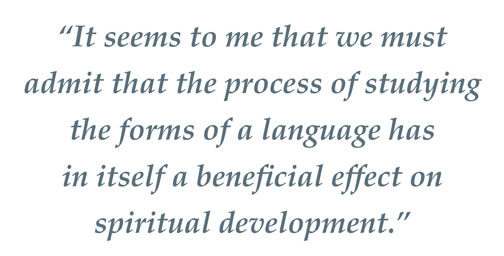 “Where God clings to our culture,” says Steiner, summarizing Nietzsche’s point, “He is a phantom of grammar, a fossil embedded in the childhood of rational speech.” Our faith in grammar was the shadow of belief still cast on language by a dead God. And Nietzsche, who famously declared the death of God, believed that we must destroy even God’s shadow.

The Western view of language does indeed betray this prejudice. It is the assumption that behind our speech and our writing is an underlying order, an order that, being universal, is the foundation and operative principle of every human language—that the universe at bottom is fundamentally rational because it was authored—and is ruled—by a rational God.

“[A]ny coherent understanding of what language is and how language performs,” says George Steiner, “… any coherent account of the capacity of human speech to communicate meaning and feeling is, in the final analysis, underwritten by the assumption of God’s presence.”

Nietzsche saw that the intellectuals of his time (the late nineteenth century) rejected the Christian God in their rhetoric, but that they were still clinging to the underlying linguistic prejudices of theism. The continuing confidence in grammar, he believed, was symptomatic of the failure of modern thinkers to take their atheistic notions to their logical conclusion.

But Nietzsche’s ideological descendants have been much more faithful to their master.  The postmodern regime which now jealously rules our educational establishment is hostile to the teaching of grammar. The National Council of Teachers of English (NCTE) and the Modern Language Association (MLA), as well as almost every university department of education are, officially or unofficially, opposed to the formal teaching of grammar.

There are Nietzschean underpinnings to their anti-grammar ideology that most of them, culturally illiterate as they are (and this by choice), don’t even realize that they have.

This is why classical education is a rebuke to the educational powers that be: It honors the Logos Himself by honoring reality.