Four guidelines for viewers who plan to see the film adaptation of this Tolkien classic.

1. Recognize variations & what they do.

To properly evaluate anything, basic knowledge precedes critical thinking. Viewers who have read Tolkien’s stories have the basic knowledge necessary to evaluate the films. By knowing the original story, one can identify what is different in the adaptations. Unfortunately, many viewers may fail to critically analyze the films because they assume that variations from the original must be bad. But sometimes variations can bring out features in a story that may have been missed. For example, one of the gems in Tolkien’s Hobbit is his characterization of the wood elves. They are “more dangerous and less wise” than higher elves. The elf-king is suspicious, quick-tempered, and has a weakness for treasure; the wood elves are people who have become “darkened” and wild. Yet, Tolkien’s description of them inspires good will and sympathy, rather than dislike:

In the Wide World the Wood-elves lingered in the twilight of our Sun and Moon, but loved best the stars;

they took ever more and more to the gloaming and the dusk. Still elves they were and remain, and that is Good People.

A complaint often made about Jackson’s recent installment, The Desolation of Smaug, is the addition of the elf maiden Tauriel. While some aspects of her character may warrant protest, others serve to highlight peculiarities about the wood elves: they are rustic yet lofty, harboring a great love for the stars, and possessing a latent light within that is bright to friend and bitter to foe. Jackson’s film captures these qualities well, delivering a sense of the elves’ loftiness as well as their earthiness.

A film adaptation can never serve as an exact representation of its literary counterpart, nor should it. Rather than attempting a word-for-word or scene-for-scene literalism, a good adaptation highlights and elaborates the book’s best parts. A careful viewer will recognize variations, but he will also ask, “What are the variations doing?” In some cases, they reward us with new and clearer vision.

2. Watch for moments of recovery.

One of the greatest benefits found in Tolkien’s story is “recovery,” the regaining of a clear view of life and the world. Adults are inevitably tempted to trivialize familiar objects that were once desirable but now drab:

… The things that are trite, or (in a bad sense) familiar, are the things that we have appropriated, legally or mentally. We say we know them. They have become like the things which once attracted us by their glitter, or their colour, or their shape, and we laid hands on them, and then locked them in our hoard, acquired them, and acquiring ceased to look at them.

Recovery is especially for adults. Everything is new for young children because they have not yet ceased to see wonder in the world, having a fascination with even the most mundane, prosaic objects: a roll of toilet paper, a bouncing ball, bath water. Adults continually need help to recover a sense of the supernatural in nature. The natural universe was made supernaturally, and although we can discover and learn much about creation, we will never fully comprehend God or His marvels. Works of fantasy like Tolkien’s books and Jackson’s films can help adults wipe the cobwebs off well-worn things, to regard them with renewed wonderment. As one example, the recent film focuses on the art of healing during a scene where an herb is used to counteract a poisoned arrow-wound. In the scene, while it is clear that the herb is necessary for the cure, the healing is unmistakably supernatural; through use of special effects, viewers glimpse a power at work beyond the potency of nature. In this scene, one can recover the truth that human physicians are not the only healers; God is the one who “heals all your diseases” (Psalm 103:3). The film adaptations offer several moments of recovery like this, and careful viewers will do well to ask, “Where is truth being recovered?”

Tolkien called fantasy a perilous realm. In a world where the boundary between nature and the supernatural is blurred, serious spiritual truths or falsehoods may be encountered. The more powerfully and vividly this realm is portrayed, the more dangerous the fantasy becomes for the unwary. Jackson’s film achieves an impressive sense of realism in its depiction of evil: The spiders of Mirkwood are horrifying and Smaug is truly stupendous. Having viewed the film twice, I am especially struck by one spiritually suffused scene: Gandalf’s encounter with the Necromancer. In the scene, the dark power of the Necromancer subdues the good wizard, and as his shadow quells Gandalf’s resistance, the Necromancer taunts, “There is no light that can defeat darkness.” It is likely that many viewers will pass over the spiritual significance of this scene, and such a lack of discernment is perilous, because if a viewer uncritically observes evil spiritual powers defeating good ones, as the Necromancer subdues Gandalf, then a falsehood—that evil is just as strong or stronger than good—may find a foothold in the viewer’s worldview. Mature spiritual understanding, however, means willfully opposing the demons’ boasts with truth: “The light shines in the darkness, and the darkness has not overcome it” (John 1:5). Other spiritual truths and falsehoods appear in the films through the characters’ dialogue and actions, and wary viewers will ask, “Is it true or false?”

4. Be alert to vice and virtue.

Tolkien said that fantasy presents man through the “Mirror of scorn and pity.” A good fairy-story reveals that man is weak and broken, in need of saving from his own vice; for this reason, the best works of fantasy will reveal the consequence of vice as well as the hope of virtue. Virtue is rewarded with ‘eucatastrophe’: “a sudden and miraculous grace … giving a fleeting glimpse of Joy, Joy beyond the walls of the world, poignant as grief.” This is the happy ending, when evil is overcome by good. Fantasy, however, does not deny the depth or weight of vice; goodness is most deeply felt when one has faced the evil in oneself and overcome it. That is why one must evaluate how seriously the films treat vice and virtue. Neither should be treated playfully or used to merely entertain. A slew of decapitated and arrow-ridden orcs should not appear silly, but sobering. The film’s fight scenes often veer into banality, but viewers will find profound character development in Bilbo and Thorin, who subtly display sin’s danger and virtue’s hope. Viewers who wish to be alert to these points may ask, “What are the consequences of vice and the rewards of virtue?”

Conclusion: A mistaken assumption about fantasy is that it is primarily for children. Tolkien thought otherwise: “If fairy-story as a kind is worth reading at all it is worthy to be written for and read by adults. They will, of course, put more in and get more out than children can.” The same can be said of Jackson’s films: If it is worth watching (and so far the box office says that it is), then it is worth an adult’s careful attention. The more viewers put into the films, the more they will get out them. 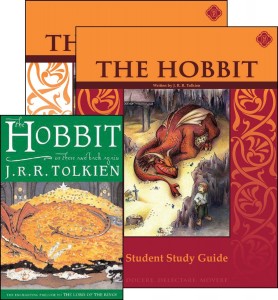 Brett Vaden is the Assistant Director of the Schools Division at Memoria Press and an instructor at the Memoria Press Online Academy. He taught for several years at Highlands Latin School and helped establish the curriculum. He is a 2004 graduate of Moody Bible Institute in Chicago with a degree in Biblical Languages. At Southern Seminary, Brett earned an Advanced M.Div. in Biblical and Theological Studies and a Ph.D. in Pastoral Theology.