One Saturday many years ago, when even my oldest children were young, we had a visit from two friends, Jim and Renee. They were not quite my parents’ age, but they were old enough that they had just become grandparents.

We invited them in, and, as happened when anyone entered our home at that time, they were beset with children. Not everyone takes such things well, but for these friends, it was a welcome imposition. After a few formalities, Jim sat down on our living-room couch and grabbed a children’s picture book, and my two oldest children, my son and my daughter, automatically sat down next to him. He read them a story as my wife and I—and Jim’s wife, Renee—looked on.

In that one moment there was an immediate bond of shared wonder between these two friends and my children, woven from a simple story.

Something about the act of reading aloud is communal. To read by yourself is to involve only one person, but to read aloud is to involve you and someone else—perhaps several people, all of whom are hearing the same thing at the same time from the same book read in the same voice. This is the first benefit of reading children’s stories—and reading them aloud: It makes a community out of those who had been mere individuals.

I don’t remember what Jim read to my children that day. Maybe it was Green Eggs and Ham, or The Story of Ferdinand, or possibly Mike Mulligan and His Steam Shovel. It could have been a hundred others—we had them all.1

I spend a lot of my time writing and speaking on education issues, and I frequently have occasion to extol the virtues of reading aloud to children. In my opinion, it is one of the most important ways, not only of bringing our individualistic modern selves together, but of simply introducing children to the wonder of reality. This is its second benefit: It brings a sort of enchantment into their everyday lives.

When our first child was about a year old, we began reading to him at bedtime. We ushered him into the world of “Wynken, Blynken, and Nod.” He had no trouble at all with the idea that three children, one night,

Sailed off in a wooden shoe—
Sailed on a river of crystal light,
Into a sea of dew.

To him it would have seemed no more fantastic to sail off in a shoe than sailing off in a ship.

There were certain picture book illustrators and authors who became perennial family favorites: Bill Peet (The Caboose Who Got Loose, Cyrus the Unsinkable Sea Serpent, and Hubert’s Hair-Raising Adventure), Paul Galdone (Henny Penny, The Gingerbread Boy, and Hansel & Gretel), and Edward Lear (“The Owl and the Pussycat,” “The Jumblies,” and “The Pelican Chorus”).

Each book was a fairy wand, waved over our home. Whenever we heard a loud explosion, it was Drummer Hoff, firing it off. Our home was not just good, it was The Best Nest. Sometimes the last one into the house got a swat, just like the Chinese duck in The Story About Ping.

And every bean was a magic bean.

When additional children were added to our merry band, they too were taught the consequences of kissing a frog, and not to talk to strange wolves on the way to grandmother’s house. They knew better than to build their houses out of straw and to have a healthy fear of giants, poisoned apples, and old women living in houses made out of candy. And none of them suffered any doubts about whether the dish ran away with the spoon.

We plied them with favorites such as Dr. Seuss’ The Sleep Book, our copy of which still bears, inside the front cover, an annotation: “1122 Bedroom Lane, Storybookland.” It was written there by my wife when she was a little girl.

The kitchen was often a place of instruction and admonition in practical wisdom born of books. There was more than one cake baked there about which it was asked, “Who will eat this cake?” And always there was a chorus of “I will” from the very voices who had answered “Not I” when the question was who would help to make it.

But it wasn’t only delight we found in books. One night, my wife came back into the living room after having read a chapter in Anne of Green Gables to my daughter, the half-opened book hanging limply from her hand. I could tell she had been crying. Matthew, Anne’s beloved adoptive uncle, had died.

Bedtime wasn’t the only time our children were read to. As part of our homeschool day, they were read to in the early afternoon, usually after lunch. Some of my fondest memories are the many times I passed by the living room and poked my head in to see my wife sitting on the sofa, with one child in her lap, one sitting next to her coloring in a book, and another on the floor quietly playing as she read the Bible.

And this is a third benefit that comes from reading children’s stories: They were not only learning by listening; they were learning to listen. Listening, like reading and writing and calculating, is a skill.

And this training in how to listen extended even to the dinner table. After supper, I would push the dishes away and begin reading. The Little House on the Prairie books and the Chronicles of Narnia were books we read again and again as dessert was served, in addition to Booth Tarkington’s Penrod, and The Lord of the Rings.

Everything these stories touched was transformed, and even the most mundane of circumstances was cast in a new light—for everyone, including the adults.

Occasionally I would notice my wife missing, and after searching for a few minutes would find her sitting up on our bed reading a magazine, her back propped up on a pillow. Around her wriggled the signs that her search for a few moments of solitude had been unsuccessful. She would look up at me, put a loving hand on the head of the squirming child nearest her, and with a bemused expression say, in Seussian tones, “I do not like this bed at all. A lot of things have come to call.”

More than once I would be working at the dining-room table long after the voice of my wife, reading in the next room, had become background noise. All of a sudden I would realize that the children had all escaped to the backyard long ago, and there was silence in the house. I would poke my head in the living room, where she would still be sitting on the couch, lost in the book she had been reading to the children.

“Are you okay?” I would ask. “Yes,” she would say, “but listen to this …,” and she would share some pearl of wisdom she, an adult, had learned from a book meant for children.

In Virginia Lee Burton’s The Little House, a woman passes by a little dilapidated house in the city one day. It turns out that the house had once been out in the country, but the city had grown all around it. “No one wanted to live in her and take care of her anymore.” The woman finds out that the house actually belonged to her great-great grandfather, and that it “couldn’t be sold for silver or gold.” So she had the little house moved out into the country so she could live in it.

We too own a house in the country, having moved from the suburbs before our children were born. When my wife gets in one of her cleaning moods, she wonders out loud what the many children’s books we have acquired might go for at a yard sale. No one wants to read or take care of them anymore.

Some of them may need to go. But someday our grandson—or his future siblings and cousins—may walk by those shelves, and some of those books may be moved to his own bookshelf at 1122 Bedroom Lane, Storybookland. And that’s why they can never be sold—for silver or gold. 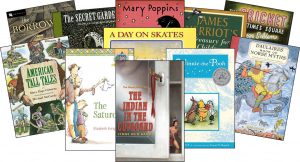