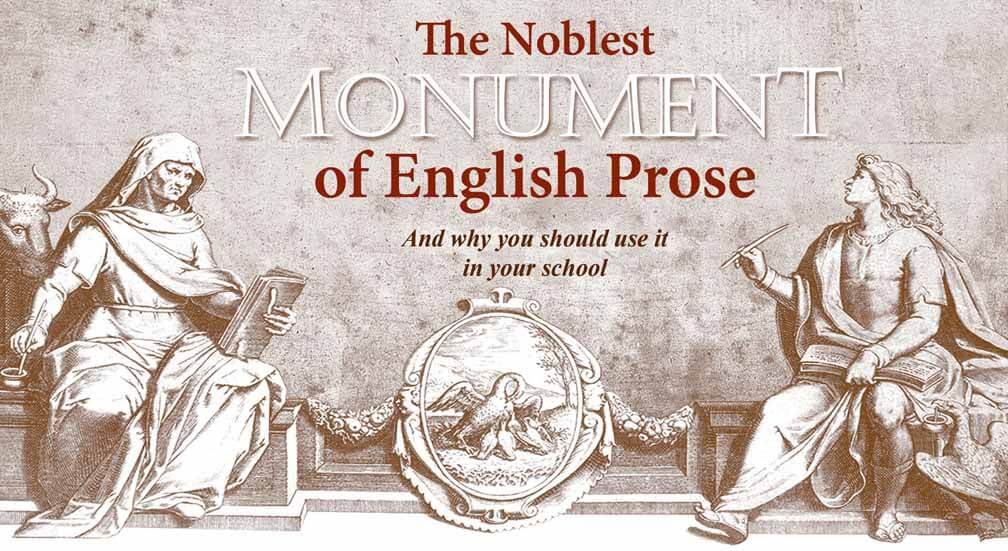 When we were deciding which version of the Bible to use at Highlands Latin School, there were a number of things we took into consideration that led to our choosing the King James Bible.

There are undoubtedly different criteria one could apply to decide what Bible to use, depending on the context. A person might well choose one Bible for personal devotion and another for academic study, or one for reading aloud in church and another for a Sunday School class. In formal education, however, there are certain things we are looking for which the King James Bible possessed to a greater degree than other translations of the Bible.

First, its innate poetic and literary quality set it apart from other translations. Second, its historical influence on English literature far surpasses that of other versions. Finally, the unique structure and memorability of its language make it particularly suited to the needs of an academic environment.

That the language of the King James Bible is great is a judgment with which most of us are familiar. It has been rightly called the “noblest monument of English prose.” The English literary historian George Saintsbury had to resort to Latin itself to find the words to describe its literary quality. This version of the Bible, he said, “will always be the ne plus ultra [the highest point of achievement] of English composition …” He went on to extoll it as among the two greatest expressions of the language:

The plays of Shakespeare and the English Bible [the KJV] are, and will ever be, the twin monuments not merely of their own period, but of the perfection of English, the complete expressions of the literary capacities of the language.

While the seventh and eighth chapters of the “Song of Solomon” can set young teenagers first exposed to them to snickering, Saintsbury cites them as constituting “the best example known to me of absolutely perfect English prose—harmonious, modulated, yet in no sense trespassing the limits of prose and becoming poetry.”

John Ruskin, the great Victorian writer famed for his ability to write in a diversity of forms and styles, related that his mother forced him “by steady daily toil” to read the Bible all the way through, making him pronounce “every syllable through, aloud, hard names and all.” She also made him memorize long chapters of it by heart.

These verses became, said Ruskin, familiar to his ear “in habitual music.” His mother made him read the Bible aloud with her until he went to Oxford. She corrected his pronunciation mistakes and made him understand each verse. And where the verse was beyond his capacity, “she made sure that as soon as I got hold of it at all, I should get hold of it by the right end.”

His mother was a hard taskmaster, but she knew the benefits that were derived even of the parts of the Bible that seemed to have little value: “If a name was hard,” he said, “the better the exercise in pronunciation; if a chapter was tiresome; the better lesson in patience; if loathsome, the better lesson in faith that there was some use in its being so outspoken.”

Later in life, Ruskin opened his old 1816 Bible, and out of it fell his mother’s list of the chapters with which “she established my soul in life.” These verses, he said, he counted “the most precious, and, on the whole, the essential part of all my education.” 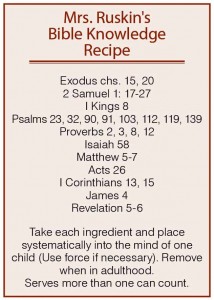 The shadow cast by the King James Bible on our language, our literature, and our culture has been widely acknowledged. “Without the King James Bible,” says theologian Alister McGrath, “there would have been no Paradise Lost, no Pilgrim’s Progress, no Handel’s Messiah, no Negro spirituals, and no Gettysburg Address … Without this Bible, the culture of the English-speaking world would be immeasurably impoverished.”

Despite the lack of any intention on the part of the translators to affect the history of the language, circumstances conspired to multiply its impact. It appeared at a time when the English language was just beginning to be standardized and at a time when books were just becoming available to the general public. It became, in many ways, the standard by which English was judged. From the spelling of English words to the introduction of Hebrew and Greek phrasings that later became a part of standard English, it formed and fertilized the language.
“If every Bible in any considerable city were destroyed,” said Cleland McAfee, “the Book could be restored in all its essential parts from the quotations on the shelves of the city public library.”

The appropriateness of the King James Bible to the educational context is demonstrated by two considerations: the first has to do with memorization, and the second with literary facility.

Memorization plays, not an accidental, but an essential role in the process of making a text real to the student. We want our students to memorize it, and by memorizing it, to know it, and through knowing it, to gain an affection for it, and from having an affection for it, to establishing it in their minds and hearts so that it will have the power to change them.
The poetry and rhythm of the language of the King James Bible make the process of memorization easier in a way that many newer versions, which are subject to the vagaries of political, cultural, and linguistic fads, do not. It is inherently easier to memorize, say, the 23rd Psalm in the form:

The Lord is my shepherd; I shall not want
He maketh me to lie down in green pastures:
He leadeth me beside the still waters,
He restoreth my soul …

… than, as one popular modern translation has it:

The Lord is my shepherd. He gives me everything I need.
He lets me lie down in fields of green grass.
He leads me beside quiet waters.
He gives me new strength.

The first acquiesces to the primordial music of the language; the second succumbs to the modern penchant for mechanistic prose. Every chapter, says Albert Stanburrough Cook, “is a gallery of word-pictures; and it is this picturesqueness which makes the Bible always attractive and usually intelligible … The picturesqueness of Scriptural language addresses the mind’s eye; its simple, regular, natural harmony addresses the ear … It is regular, because the ear, when ever so little accustomed to it, kinows just what to expect. The verses fall into a march-tune; their movement is disciplinary, first of the emotions, and through them of life and conduct.”

It is not that it can’t be done using the latter translation. It has been done. But an educator needs all the help he can get.

The King James version also equips students with a set of common phrasings—and a manner of expression—that they will encounter over and over again in their study of great literature. It plants the seeds of literary awareness. John Milton proposed, in his Paradise Lost, to “justify the ways of God to man.”

“And I only,” says Melville’s Ishmael of the fate of the Pequod in Moby Dick (quoting Job), “am escaped alone to tell thee.”

And there are books whose very titles, such as Faulkner’s Absalom, Absalom!, and Steinbeck’s Grapes of Wrath and East of Eden, give away their fundamental Biblical emphasis.
How many will fully understand Lincoln’s expression “a house divided cannot stand” in his Second Inaugural Address? Or Martin Luther King, Jr.’s “I Have a Dream” speech, whose title references Moses on Mt. Pisgah?

With younger children, the King James can be hard to read and understand, but that is not a reason to abandon it. Highlands Latin School uses Memoria Press’ Christian Studies program which includes the Golden Children’s Bible, which is a simplified King James. It employs the same elevated language and preserves all of the great King James expressions in important passages. It is a Bible, not a story Bible. Students can, of course, simply use their own King James version with the program. The Golden Children’s Bible too is in a form which students can easily remember and respect.

It preserves the essence of a book which continues to form our language, improve our thought, and enrich our culture.