Modern languages are taught by the conversational method. If I understand this method correctly, it involves an emphasis on oral and written conversation in the classroom, supplemented with a secondary focus on grammar. 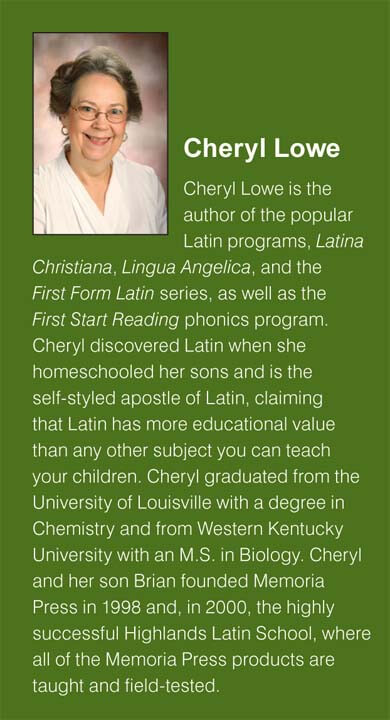 Ideally this conversational instruction is augmented by travel and an immersion experience with native speakers. It could also be called the natural method, in that students are learning the new language in a natural way rather than the artificial grammar/translation textbook method. The idea is to simulate the way a child naturally learns to speak (or read) his own language, or the way a foreigner learns a new language by immersion. I have used four terms here (modern, natural, immersion, conversational), but I think they all describe approximately the same thing. I will just use the term “natural method” for the rest of this commentary. There are several reasons why Latin should not be taught by the natural method like a modern language.

There was a tried-and-true method for teaching modern languages before the advent of the natural method, the grammar/translation method. The natural method was introduced in the 1960s, about the same time as all of the other modern educational experiments, like “new math,” “discovery learning,” etc. None of them worked then, and they don’t work now. I know. I was taught by all of the old methods and began teaching under all of the new methods. And I have survived to tell the story.

The goal was never to learn to speak a foreign language, which was considered an unrealistic goal in a one-hour-a-day instructional setting, because the natural experience of the child who learns to speak his own language without instruction cannot be duplicated in that limited time. However, by giving the student reading proficiency and the grammar basics of a foreign language, the school had prepared him to develop speaking proficiency should the opportunity arise. It works beautifully.

You can learn to read a modern language in one year. Back when I was at university, the college of arts and sciences required two years of foreign language for all majors. My degree was in chemistry, but even after I tested out of French grammar, I still had a year of French literature.

My oldest son had two years of German in a very good private high school and learned very little by the natural method. His private liberal arts college required a year of foreign language, and so he was excited about really learning German finally, but it was more of the same—the only compensation being that his pretty teacher played the guitar to accompany her German drinking songs. Had he learned the grammar basics in school, he would have had the tools he needed to learn to speak German later, when he traveled abroad as a graduate. 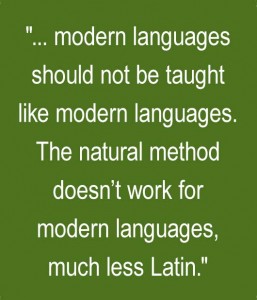 The argument for the natural method is built upon two false premises. The first is that you can duplicate the natural way a child learns to speak his own language in a classroom setting. You can’t. There isn’t enough time. The second false premise is that natural is better than artificial. It is better with regard to some things such as food, but is the natural man better than the civilized one?

The natural method is not only contrary to common sense but to the whole premise of formal education, which is to teach by systematic, logical instruction. This is the very opposite of the natural, random, untutored way we learn to speak. The natural method is the same as teaching reading without phonics; it’s the same as so-called “inquiry-based” learning. It is that siren song of progressive education applied to learning languages.

The appropriate way to teach anything is to give systematic, explicit instruction, enabling the student to learn more in less time. Would you take your child to a tennis or golf coach that used the natural method?

The natural method has been a failure with modern languages, so why would we expect it to succeed with Latin? It is, after all, unnatural.