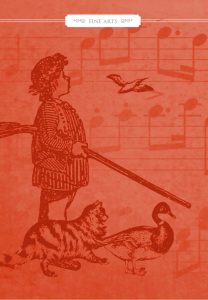 Stories travel from a writer’s mind to the heart and imagination of a reader. In the Western tradition, the written or spoken word serves as the primary vehicle for conveying stories. Yet the visual and performing arts excel at telling stories too, and a combination of the two often makes a story more expressive and memorable than one told using words alone.

For children, a story combined with music is especially powerful. Large-scale forms like opera and ballet come to mind when we think of telling stories through music, but smaller-scale forms also bring stories to life, starting with the irreplaceable genre of “song.” Songs tend to be the first music most children hear and understand.

Melody, harmony, and rhythm can invigorate—indeed, transform—a text. Plus, there is an immediacy to words that are set to melody or associated with musical sounds. What happens, though, if text is not present? Can instrumental sounds alone convey the drama and substance of a story?

This question figured prominently in one of history’s loudest aesthetic debates, called “The War of the Romantics.” Starting around the mid-nineteenth century, Western composers, critics, and audiences grappled with a sharp ideological divide over whether instrumental music, sans words, could, or even should, convey stories. By the dawn of the twentieth century, that battle had been won by those championing the narrative possibilities of instrumental music. To that victory we owe a long line of vivid narrative compositions (tone poems) by composers like Richard Strauss and Franz Liszt that still today wow audiences in concert halls. From that same victory evolved a new genre of music essential to today’s most popular method of telling stories: the film score.

So, yes, instrumental music all by itself has grand potential to convey stories in highly effective ways. Still, for children the appeal of combining words and music is undeniable, particularly when presented through a form I like to call the “musically illustrated narrative”—a form used by Sergei Prokofiev to create his children’s masterpiece Peter and the Wolf.

A musically illustrated narrative, combining a spoken text with expressive music, offers a freshness and directness that pleases audiences. It facilitated Prokofiev’s pedagogical purpose in writing Peter and the Wolf, namely teaching children to identify the instrumental colors in an orchestra. But these factors alone do not account for the irresistibility or ongoing popularity of this particular work.

Peter and the Wolf benefited from the enormity of Prokofiev’s intellectual and artistic gifts. He was a complex man whom today we might call a “musical geek”—a brilliantly talented pianist and composer who displayed notable prowess in mathematics and chess. Yet his life was slammed by the cataclysm of the Bolshevik Revolution, which brought a violent dissolution of traditional Russian life and culture.

Prokofiev fled the chaos of the Revolution and spent significant time abroad, including in Paris and the United States. But making a living as a composer outside of Russia was not easy. His homesickness, plus a misplaced belief that Stalin’s policies would allow a nurturing creative arena, drew him home in the mid- 1930s. Alas, he spent the rest of his life kicking against cruel restrictions that rebuffed his imagination and limited his productivity. It remains a wonder that he was able to compose at all.

But he did compose. And he survived challenges and disappointments at times by turning from the imposed political narrative of Soviet ideology to fairy tales and classical literature (e.g., his ballets Cinderella and Romeo and Juliet). His strong commitment to creating new pedagogical repertoire for children also gave him a relatively untroubled avenue for creativity.

Prokofiev loved children for their boundless imagination, joy in play, and piercing honesty—qualities difficult to find under a Communist system dedicated to masking the truth. He also managed through most of his life to keep a biting sense of humor that can be sensed often in his music.

Biographer Harlow Robinson writes that “Prokofiev was a boy of forty-five” when he composed Peter and the Wolf in 1936, during one of the worst periods of Stalinist purges. He rejected the original text provided for him and wrote a timeless tale of a boy who disobeys his grandfather’s warning and enters the dangerous woods where wolves dwell. Prokofiev could have cast his tale as an extended “story song,” much like his earlier work The Ugly Duckling. He might have framed it as a children’s opera with roles for Peter, Grandfather, and the Hunters, plus the four animals at the core of the story: Cat, Duck, Bird, and Wolf. What pleases children more than a theatrical drama where costumed “animals” play a role?

Instead, he chose a musically illustrated narrative wherein the story is proclaimed segment by segment, between which the orchestra responds with expressive musical passages. For the sonorous identities of the characters, Prokofiev employed long-established conventions of Western music: menacing horns depict the wolf, flutes twittering in a high register evoke the bird, the slinky tone of a clarinet mimics the cavalier steps of the cat, and the bassoon intones Grandpa’s forceful, belabored steps. Peter himself receives a jaunty, unforgettably cheerful theme played by the strings.

We will never be able to calculate the number of children captivated by Prokofiev’s Peter and the Wolf. The work dissolves the complexities of the symphony orchestra. Charming moments in the story gain more charm when sounded by the instruments. Scarier aspects of the story triple their power when painted in music. And the final victory in the form of a march (which is, if jubilant, also ambivalent, since one character remains trapped inside the wolf’s belly) stirs child-sized feet to prancing and puts a smile on adult faces. How impoverished this story would be if the music were to disappear!

Peter and the Wolf reminds us, too, of ancient traditions for conveying stories. Many of our treasured classical works were designed to be sung or recited with instrumental accents. Music and story have long needed and desired one another.

If it has been a while since you immersed yourself in Peter and the Wolf, give it a try. You may be surprised by the number and variety of narrators available in recorded versions. As you enjoy the piece, tally up the ways in which words and music enliven and transform one another. And think of the quietly heroic composer who, in dark times, nonetheless wrote measure after measure of pure joy.