Because our most fundamental realities are immaterial—like love and death—few artistic forms remain as capable as fairy tales and poetry for housing such depths. Fairy tales carry us from the prosaic landscape of our workaday rhythm to mountain streams of simple wonder and truth.

No filter necessary to drink of this pure water, just the reawakening of your childhood imagination. Fairy tales are as old as man and rooted deep in oral tradition. Eventually they became a literary tradition. In the seventeenth through the nineteenth centuries, writers such as Charles Perrault, E. T. A. Hoffman, the Grimm brothers, Hans Christian Andersen, and Andrew Lang compiled and wrote down numerous oral fairy tales from various traditions, imbuing them with a distinct literary style. And some even invented their own fairy tales, like Carlo Collodi’s Pinocchio, George Macdonald’s The Princess and the Goblin, and Oscar Wilde’s The Happy Prince, and Other Tales. 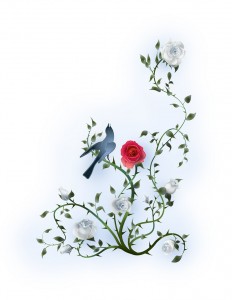 I can think of few more illuminative fairy tales than Oscar Wilde’s “The Nightingale and the Rose.” Interestingly, as licentious, conflicted, and satirical as Wilde was in his life and letters, his fairy tales are set apart, revealing a spectrum of moral wisdom and beauty. This suggests an important point about fairy tales: They distill truth by means of their simple, direct style and clear moral distinctions, and they amplify truth through metaphor and symbol.

In “The Nightingale and the Rose,” each character (or entity) in the tale is named according to what kind of thing it is—what it is in its essence: the Student, the Professor’s Daughter, the Nightingale, the Rose Tree, Love, etc. This is significant, as we will see later.

As the story goes: The young Student is heartbroken because he cannot find a red rose to give to his beloved, the Professor’s Daughter, who said she would dance with him if he brings her a red rose. From a nearby tree, the Nightingale hears his plight and takes pity on him. She understands how wonderful Love is, and possesses a deep reverence for it. So the Nightingale seeks out several rose trees in search of a red rose, but to no avail. Finally, she is directed to the Rose Tree that grows beneath the Student’s window. But it is the middle of winter, and he cannot grow any roses in the harsh, bitter cold. Yet after the Nightingale’s unrelenting insistence, the Rose Tree discloses the only way that he can produce a single red rose: through the Nightingale’s death. She must sing to him all night long with a thorn against her breast, which will pierce her heart, and her life-blood will flow into the tree and become his—producing one beautiful red rose.

She chooses to die for Love. Through her death the most beautiful red rose in the world is created. The Student sees the red rose, which he attributes to luck, and presents it to the girl. She rejects him: the rose will not match her dress, and she is now interested in the wealthy Chamberlain’s nephew who has sent her jewels and who wears silver buckles in his shoes. Dejected, the Student tosses the red rose into the street, where it is crushed by a cartwheel. Jaded, he returns to his books, disbelieving in love.

With an ending like that, you may be thinking that you’d rather not read Oscar Wilde’s fairy tales. But permit me to suggest otherwise: There is much more in the heart of this fairy tale than a sad ending of unrequited love.

Let’s begin with the Nightingale, the moral center of the story. Just a few lines into the tale, we sense something different about her: “From her nest in the holm-oak tree the Nightingale heard him, and she looked out through the leaves, and wondered.” She has the capacity to wonder. She thinks deeply about the Student and about Love:

Here at last is a true lover. Night after night have I sung of him, though I knew him not; night after night have I told his story to the stars, and now I see him. His hair is dark as the hyacinth-blossom, and his lips are red as the rose of his desire; but passion has made his face like pale ivory, and sorrow has set her seal upon his brow.

By faith—”though I knew him not”—the Nightingale has believed in and recognized the ineffability of Love—for she has sung about it to the stars night after night. 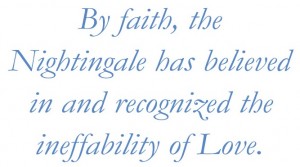 For her, only the unfathomable stars seem infinite and transcendent enough to receive her songful musings about Love. As well, she now sees this Love embodied in the Student, signified by descriptive similes and metaphors: “His hair is dark as the hyacinth-blossom,” “his lips are red as the rose of his desire.” Moreover, the Nightingale elaborates on the spiritual and transcendent nature of Love by contrasting it with material possessions:

Surely Love is a wonderful thing. It is more precious than emeralds. Pearls and pomegranates cannot buy it, nor is it set forth in the marketplace. It may not be purchased of the merchants, nor can it be weighed out in the balance for gold.

Next, the Nightingale flies to each rose tree in search of a red rose, offering what she believes to be her greatest gift, her music: “Give me a red rose, and I will sing you my sweetest song.” In her visits to the first two trees, she does not realize that much more than a song will be asked of her, that she will be capable of greater spiritual heights—offered by the third Rose Tree:

“If you want a red rose,” said the Tree, “you must build it out of music by moonlight, and stain it with your own heart’s-blood. You must sing to me with your breast against a thorn. All night long you must sing to me, and the thorn must pierce your heart, and your life-blood must flow into my veins, and become mine.”

This presents the tale’s climax, its highest moment of tension: Will the Nightingale sacrifice her life for Love? Indeed, that which is most precious rarely comes without a great test of will. Her decision is fraught with struggle:

Death is a great price to pay for a red rose. Life is very dear to all. It is pleasant to sit in the green wood, and to watch the Sun in his chariot of gold, and the Moon in her chariot of pearl. Sweet is the scent of the hawthorn, and sweet are the bluebells that hide in the valley, and the heather that blows on the hill. Yet Love is better than Life …

The Nightingale reminds us that existence is a blessing. Her vivid sensual description of nature conveys the beauty of Life for which we must be thankful. “Life is very dear to all,” she says. Yet she ultimately concludes that “Love is better than Life.”

The death of the Nightingale for Love proceeds in a harrowing progression throughout the night:

How extraordinary it is that love and death remain inextricably linked. Perhaps the deepest love can only be understood in the pain of death. With the crucifixion of our Lord, a gravely poignant death happened because of love. Through death, transcendent love poured forth. Without death, there was no resurrection unto life.

In this fairy tale, we are called forth to wonder, like a child, at the Love that is both immanent and transcendent, in this world and out of it. When the Nightingale gave up her spirit in death for the Love of a man, all of creation was shaken: the white moon heard it and forgot the dawn, the red rose heard it and trembled, Echo bore it to her purple cavern in the hills and woke the sleeping shepherds from their dreams. It floated through the reeds of the river, and they carried its message to the sea. That message is here, too, in the heart of this fairy tale, and in the center of all reality—where the crimson rose of the East is risen!