One of the questions people ask about traditional logic is why it doesn’t teach truth tables. Modern logic, the most common kind of logic encountered in high school and college, uses them, so why does traditional logic ignore them?

Many people encounter a smattering of logic in high school math courses. Here, more than likely, they will encounter simple truth tables. Truth tables were invented by philosopher Ludwig Wittgenstein. He invented them to accompany the calculus into which modern analytic philosophers had transformed logic. They were a way to quickly solve for the truth of complex logical propositions in the modern system.

In the modern system of logic we would want to immediately reduce this down to its formal elements. Let’s say:

If we did this, then we could represent the statement as follows:

Using truth tables, we would set forth all of the truth possibilities of P and Q so we could see clearly when P and Q is true and when it is false: 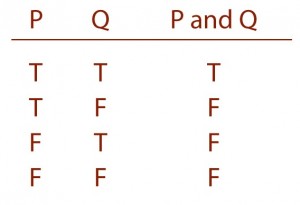 When statements become much more complex, truth tables can be an easier way to calculate their truth value.

So if truth tables make the determination of the truth of statements easier, then why doesn’t traditional logic teach them?

The first reason is that they are not practically useful in actual argument or discussion, since most statements used in everyday speech and even in academic conversation never get to the level of complexity that would require a truth table to figure them out. They are helpful in certain scientific applications and for computer programming (modern logic’s most practical application), but outside those fields, they are seldom used or needed.

I have not only taught logic, but have engaged in private and public debate for over 20 years. While I have repeatedly made use of William of Sherwood’s traditional mnemonic verse of the 19 valid syllogism forms and the rules for syllogism reduction (both of these are covered in Traditional Logic, Book II), I have never had to resort to a truth table.

In the statement P and Q, we can tell its truth from its component parts, P and Q. P and Q is called a “conjunctive proposition”—it conjoins antecedent P and consequent Q. Traditional logicians believe that conjunctive statements are the only kind of statements whose truth can be “solved” in a truth table. No other kinds of logical statements (P or Q, If P, then Q, etc.) are truth functional in this way. You cannot tell their truth value merely from the truth value of their parts.

But this does not stop the proponents of modern logic from trying to quantify such statements, even if such quantification results in some strange anomalies. Take the following example:

If it rains, then my dog will get wet

In modern logic, we would “solve” for the truth of this statement using a truth table. If we assume: 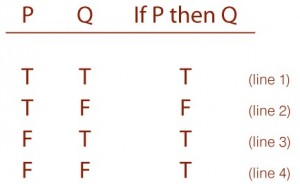 This kind of statement is considered true in every possible case except when P is true and Q is false (line 2). Let’s say my dog is an outside dog and has no protection from the rain. In that case, when it rains, my dog gets wet—both P and Q would be true, and therefore, it would be true to say (line 1) that the entire statement If it rains, my dog gets wet (If P, then Q) is true.

In fact, it makes no sense at all. How could a statement that is contingent on something happening be true or false if it didn’t happen?

In the traditional system, a conditional statement asserts a necessary logical connection between the rain and your dog getting wet. But modern logic can only keep its system clean and efficient if it can solve the truth value of the whole on the basis of the parts. Formal efficiency is a Procrustean bed into which we try to fit language. But things get lost in the process—things like common sense.

But it is not just when the antecedent is false that the truth tables don’t make sense. Take this statement:

If ducks can swim, then the moon orbits the earth

In this case, the antecedent is true, as is the consequent. And so the truth table tells us (line 1) that the whole statement is true. But is it? What does the fact that ducks can swim have to do with the fact that the moon orbits the earth? The antecedent and the consequent may individually be true, but there is simply no logical connection between them. In the traditional system, the statement is neither true nor false. It is simply meaningless.

The traditional system captures the actual meaning of conditional statements as we use them in real life: to assert a necessary connection between the antecedent (P) and the consequent (Q). In modern logic the only connection recognized is the happenstance coincidence of the truth or falsity of the individual elements. In the traditional view, we assert that the rain and the dog getting wet have a fundamental metaphysical relation. Modern logic was developed by people who rejected the very idea of metaphysics. Traditional logicians reject the idea that language can be quantified in the way that modern philosophers believe it can. Attempts to quantify language only serve to distort it.