If I see my logic program listed in the math section of a catalog one more time, I’m going to—well, I’m not entirely sure what I’ll do, but it will probably be illogical.

Not that the people who make these catalogs are trying to make me mad, I’m sure. They’re just trying to sell my books, which should make me happy. So why does it bother me so much that people think logic is math?

Well, first of all, because logic is not math. And, second, because the fact that so many people think it is math is an indication of how much we are influenced by modern philosophy—and how far we have come from a classical Christian view of reality.

This tendency to view logic as mathematical rather than linguistic is partly due to the fact that the only exposure most people have to logic is a smattering of modern sym­bolic logic in a high school or college math class.

Indeed, when most people think of logic, they think almost exclusively of the modern symbolic system, because that is what most logic programs teach. If you pick up any popular college text, you will find that, although it includes a small section on traditional logic, most of the book is focused on modern symbolic logic. These books will cover the traditional system, but only as a sort of prolegomena to the modern systems of propositional and predicate calculus.

The difference between the two systems of logic is quite dramatic, and easy to see because of the modern system’s prolific use of symbols, in addition to common modern fixtures such as truth tables and Venn diagrams. These things are almost entirely absent from the traditional system.

The question I want to ask and answer here is this: If logic is not math, then what is it? The answer is that logic is a language art. It is the study of right reasoning. I cannot stress this point strongly enough. For classical educators, this point is absolutely crucial because it will determine the very makeup of the curriculum.

In the old listing of the liberal arts, there were two basic classes of subjects: the three language arts (the trivium) and the four math arts (the quadrivium). Logic was always considered to be the second of the language subjects, after grammar and before rhetoric.

The Rise and Fall of Modern Logic 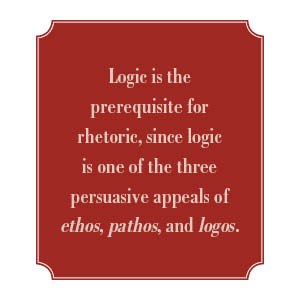 In fact, modern symbolic logic is the creation of modern philosophers (such as Bertrand Russell) and didn’t even exist until the turn of the twentieth century. Russell and Alfred North Whitehead wrote a book called Principia Mathematica that attempted to create a logical calculus that could be used to solve scientific problems. To this was added “truth tables,” a procedure that purported to be able to resolve any meaningful statement into a set of symbols and determine its truth value.

This was at a time when philosophers in the English world were experiencing science envy. They wanted their discipline to have the same objectivity and accuracy as the hard sciences. For these people Principia Mathematica became a sort of totem, and for many years it was required reading for English and American philosophy students. This was, of course, a daunting task, since most students were not mathematically sophisticated (or patient) enough to even understand the book, with its complex technical formulas and turgid explanations.

It helped give rise to the school of philosophy known as “logical positivism,” which claimed that the only meaningful statements were statements which could be scientifically verified, a belief that persisted into the late twentieth century. But the close connection between modern logic and philosophical positivism has turned into something of a curse given the steep fall of positivism since the late twentieth century.

As these and other issues arose inside and outside the movement, confidence in the movement began to erode, and, along with it, the original basis for modern logic.

Logic As a Language Art

Why should we feel under any obligation to cast our reasoning into mathematical terms in order to ape the sciences? Language can be just as objective and accurate in the qualitative realm as mathematics is in the quantitative realm. Mathematical symbolism can sometimes be more precise, but more often it is less accessible.

Most of the things in life that we need to analyze and argue about do not involve the application of science, and even those that do involve science still require a facility with language in order to think about and discuss mathematics and science.

In actual discussion and debate we do not use mathematical symbols; we use language. And if we are going to demand anything of the system of logic we want our students to use, we ought to at least be able to demand that it be usable.

The system of modern logic is useful in understanding how computers think, and it is an excellent preparation for computer programming, but outside these applications we need to remember that human beings are themselves not computers, and they relate to one another through language.