Mrs. Hogue is standing at the front of the room reading a story from her copy of The Golden Children’s Bible. Every student has a copy open and is reading along with the teacher. She stops reading and looks around the class:

“Why did Pharaoh fear the children of the Hebrews?” Every hand in the room goes up.

“He was afraid they would fight against him,” says one of the girls when the teacher calls on her.

Just down the hall, Mrs. Wilson is standing in front of her room full of seventh and eighth graders, where she has her finger on the button of an audio player, about to press the “pause” button. She is playing an audio performance of Shakespeare’s As You Like It, a book version of which she is holding in her other hand.

She stops the player and asks, “What do you think about Touchstone?”

David, who is sitting in the back row, answers, “I think he’s complaining.” Several other students offer slightly differing assessments.

These teachers are using Memoria Press’ literature guides, which take just a few really good books and focus on them, dwelling on the words and worlds they each create in their own unique way. And in the process, they learn about language, geography, history, and nature. They are part of a Memoria Press K-6 curriculum, which includes not only literature, but Latin, math, English, nature study, and classical and Christian studies.

“This is the school’s sixth year,” says Jeannie Davis, Headmistress of the Lexington Latin School (shown left). “We began our program with a few students taking Latin and also Roman History. The ultimate origins of the school are in Mrs. Davis’ kitchen, where she began teaching two students in 2003. The next year, she moved to a building and had four students. From there the school grew by word of mouth. 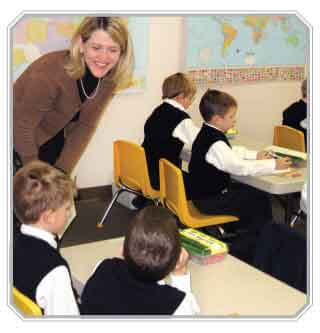 There is something distinctly different about the school. For one thing, the teachers are not sitting on the floor with the children as they seem frequently to be in many public school classrooms, in a faux attempt to be “child-centered.” The teachers here are definitely directing the learning, mostly from the front of the classroom. “This structure creates an atmosphere of order and discipline. At the front, the teacher is the focal point and immediately felt by students to be in charge of the classroom, which is imperative for students’ learning,” says Mrs. Davis. “She’s the one who knows what the students do not, and her job is to impart it to students.”

Standing in front of her first grade class, Louise Walker calls each child by name and gives each one a copy of the book they are beginning today: Billy and Blaze, by C. W. Anderson. She asks the children to open their books and look at the pictures.

“Find the title page,” she says. And, after a fluttering of pages, “Who wrote the book?” “What is it called?” and “Who is the illustrator?” in quick succession. Hands go up and down, answering her questions. “C. W. Anderson!” “Billy and Blaze!” they answer, more than enthusiastically.

“That’s right,” says Mrs. Walker. “He wrote it and illustrated it.” She then has them go to the beginning of the story, and asks what the first word is.

“Good. Use that word in a sentence,” she says. And they do. Then she asks, “What is the world, and what is in it?” “Grass, trees, animals,” they respond.

But literature isn’t the only thing they study. “The cornerstone of our school is the study of Latin,” says Mrs. Davis. “Latin teaches vocabulary and trains the mind to think logically. Practically any vocation children eventually may choose, their Latin will be of great use to them. Our students love their Latin classes. We have found second grade to be the perfect grade to begin teaching Latin, as that age loves to memorize and parrot what we say.”

They are also studying math in the second grade class, where Mrs. Craig is going from desk to desk, helping each student with the test they are taking that day. She is using the Rod & Staff math series, a Mennonite program that emphasizes the fundamentals of arithmetic. There are no frills, just unadorned pages with basic lessons that make arithmetic clear and straightforward.

And in Mr. Mize’s seventh and eighth grade logic class, they are studying logic, using Memoria Press’ Traditional Logic program, which lays down a logical system of traditional thinking skills. Do these children have any clue that what they are studying is the product of one of the ancient world’s great philosophers, or that the system they are using to learn their lessons was the result of medieval educators who made the subject easy to teach and learn? Probably not, but it isn’t slowing them down.

“When I began homeschooling,” says Lynn Wilson, a former homeschool mother who now teaches the fourth grade at Lexington Latin School, “I knew nothing about classical education. Someone gave me a copy of Susan Wise Bauer’s The Well-Trained Mind. I loved this book. I wanted to do everything it told me to do. But I needed help and direction. I just needed a plan.” 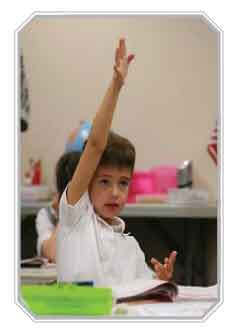 Then Mrs. Wilson heard about Highlands Latin School, where Memoria Press develops and field tests their materials. “I heard about HLS,” says Mrs. Wilson, “and so I ended up spending the day talking to Cheryl Lowe.” Mrs. Lowe is the publisher at Memoria Press and Headmistress at HLS. “When I saw her plan, I realized this is what I was looking for.”

“I love the study guides because they give you a plan to follow. And the beauty of Memoria Press materials is that homeschool parents can use them too. I don’t know why all the schools don’t use them.”

The curriculum seems to have caught on with both teachers and families at the school. “It’s the friends of parents who have kids in our school who tell their friends that drives our growth. It’s the talk at hair salons. We doubled our enrollment last year,” she says, “and we have now grown into offering a full curriculum and an enrollment of 101 students.” Mrs. Davis thinks the enthusiasm will eventually lead the school to extend its curriculum to the 12th grade and foresees an enrollment of about 275 students.

It doesn’t take parents long to see the benefits of the Latin-centered curriculum, the importance of learning math to mastery, and the virtue and wisdom that results from the study of classic literature.