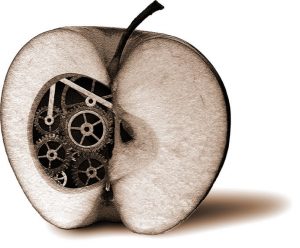 And then … a new initiative takes its place and the old one, having failed, is then forgotten.

A lot of work is involved in shifting chairs on the deck of the Titanic, and it involves a high degree of inventiveness and creativity to make it look convincing: Non-graded primary classrooms, whole-language instruction, portfolios, the New Math, year-round calendars, numerous federal and state assessment initiatives, school-to-work programs, diversity programs, the list goes on.

They promise smoother sailing, but only end up slowing things down, like barnacles on a ship.

Educational technology is the newest new idea promising to bring about positive change in schools. The only difference is that it is bigger, more all-encompassing, and will probably last a lot longer than other fads, tied-in as it is with broader cultural trends.

We have seen how technology has improved so many other things—communication, travel, industrial productivity; it is hard to imagine how it could not also improve education. Every home now has at least one computer, usually more: Why would not a school benefit from having them too?

Online education, done well, certainly seems to have benefits, particularly for homeschoolers who have no access to a good school.

Computer rooms became a fixture of schools as far back as the 1990s, and many schools now encourage and even require that every child bring an iPad to school.

The argument for this would appear straightforward: With a computer ready at hand, a student can increase his or her educational productivity. A computer makes it easier to write, easier to research, and easier to communicate.

Unfortunately, it also makes it easier to become distracted—and easier to distract others.

Unfortunately, as we all know, most students are not efficient and productive, but quite the opposite. In fact, it is interesting to note how little actual evidence there is that computers in the classroom make education any easier or more effective.

Education technology is like a lot of things: It can be helpful if used wisely, but can make things worse if it is implemented without considering all its consequences.