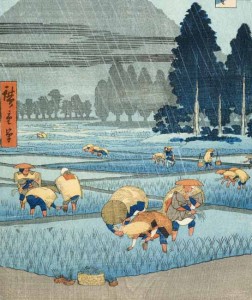 In Pearl S. Buck’s short story, “A Field of Rice,” Wang Sun, a Chinese villager in the early 1950s, is in a situation in which he is told to do something he knows won’t work. Mao Tse Tung has taken over China, and he has sent functionaries out to every village to tell the farmers (who have farmed their fields for generations) that their farms and their fields are no longer their own, but now belong to all the people, and that they will now have to farm the way the government says to farm: using the newest methods.
Comrade Li, a young, loyal bureaucrat, has been sent to Wang Sun’s village, where he tells the villagers that they are ignorant farmers, and that he, an educated bureaucrat, will tell them what they are now to do.

The villagers are to tear down their individual rice paddies where they plant the kind of rice that grows best there. All the villagers in all of China will now plant the same rice, on the same vast field. “The whole region, from Wan-li-hsiang to San-li-wan-tse, is to be one great field of rice.”

And they will do it according to the latest methods that have worked in other places. “You will see such harvest,” says Comrade Li, “as you have never seen.”

But Wang Sun’s father had been a rice farmer, and his father’s father before him. The fields had been planted with rice the same way for a thousand years. “And not just any rice, either,” he tells Comrade Li, but with “special rice which grows best in our earth here, under our feet.”

Wang Sun knows these new methods will not work. He knows they will result in a failed crop and mass starvation. But Comrade Li is an ideologue, and he will not listen. Wang Sun himself is forced into silence. He and the other villagers do as they are told.

In our own villages here in America, we have been told for years by the educational experts that if we did what they told us to do, we would yield up a rich educational harvest. They consolidated local schools, making one vast educational field from Puget Sound to the Florida Keys. They instituted the ideas of the educational experts, who shunned tradition in favor of the latest experimental ideas. They abandoned the Western culture that had grown here, under our feet.

The old classical education system that prevailed until the early 20th century was based on a tradition that went back over two thousand years. The study of the great books and the training in the liberal arts were the product of many generations of great minds. It had been winnowed, strengthened, and replanted by the Christian civilization that inherited it.

The Comrade Li’s in our own villages speak for an educational establishment that has abandoned the culture of the Christian West—it rejects tradition in favor of innovation, and it values experimentation over the tried and true.

In his essay, “On the Education of Children,” the Greek writer Plutarch says that agriculture involves three things: good soil, a good farmer, and good seed. Likewise, education involves a student willing to learn, a teacher who knows how to teach, and a body of knowledge, skills, and values to pass on. It is this latter aspect that is the educational seed.

Wang Sun has his own store of good seed, which he hides in a jar under the eaves of his house. “A year, two years, ten years, it would remain as it was, until some day he would plant it himself.”

In Buck’s story, the new methods fail, and the villagers wonder if they can travel to other places where there is still food. But all the villages are now the same, and there is no place to go.

We live in a culture in which educational starvation has become epidemic. Students who are functionally, culturally, and morally illiterate are graduating from our schools. But some of us have saved up the seeds of the old education and are replanting them again so that, as more and more people realize that the educational crop has failed, they will have some place to go.