About a year ago, Universal Pictures released the movie Oblivion, starring Tom Cruise and Morgan Freeman. It is about a man and a woman (Cruise and Andrea Riseborough) stationed on a post-apocalyptic earth. They are charged with maintaining the drones which protect a number of orbiting installations, mining water for the human encampment now situated on one of Jupiter’s moons.

Earth’s moon has been blown up, devastating the earth, which is now barely livable. Cruise plays “Jack,” who tries to keep the defensive drones operational in the face of constant attacks from roving bands of alien invaders called “scavs” (short for “scavengers”). Jack has had a memory wipe as a security precaution.

But one day, while repairing a damaged drone, Jack is captured and knocked unconscious by the scavs. He wakes up tied to a chair under an intense light. A voice comes from out of the darkness:

And how can man die better
Than facing fearful odds,
For the ashes of his fathers,
And the temples of his gods.

Jack knows these words because on one of his missions he has discovered an old library, from which he has taken several books (in apparent violation of policy). One of them is Horatius at the Bridge, by Lord Macaulay. The scavs have seen him do this. 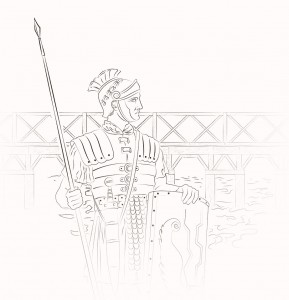 From the direction of the voice, we hear the lighting of a match, and we see the face of a man, the light of the match reflected in his goggles. It is Beech (played by Morgan Freeman). “We’ve been watching you, Jack,” he says.

Far from being aliens, Beech explains, the scavs are really human survivors of the alien invasion. They tell the at-first-unbelieving Jack the real story of what has happened to the earth, and allow him to leave their encampment to find out for himself.

As the story progresses, we, along with Jack, find out that he is just one of many Jacks patrolling various parts of the earth, all seemingly identical clones, unaware of the others. The scavs were telling him the truth: Earth was taken over by aliens who are bleeding it dry of its resources. The only humans left are the scavs, who are huddled in caves in the earth, protecting what is left of humanity. Jack has been fighting for the wrong side.

Beech has let him live because he knows of Jack’s secret passion for these books and suspects that they have awoken something inside him. In reading them, Jack has been transformed from a memoryless copy of himself, unquestioningly following the orders of what he now knows to be the very creatures who have destroyed his civilization. A man who was the servant of machines has become a master of his own soul.

In the end, the now fully humanized Jack sacrifices himself in defense of the scavs, uttering Macauley’s lines as he does so.

We are now in the process of producing a whole race of Jacks. If you doubt the truth of this charge, go look at the recent federal social studies standards, which include no historical content whatsoever.

We have been taken over by cultural aliens. We are producing memoryless copies of ourselves.

Lost in the mindless devotion to so-called “critical thinking skills” and “college and career readiness”—not to mention our servitude to machines—are the ancient stories and venerable truths that schools once taught as a matter of course—ideas and values that made us human, not just cogs in an economic machine.

Classical education’s purpose is not to teach job skills or to reform society, although without aiming at these goals it achieves them better than these other methods do. Classical education is about passing on our culture. If we don’t do it, we risk a world as culturally desolate as the physical world Jack sacrifices himself to save.