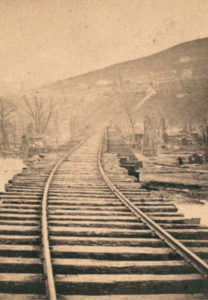 In Amor Towles’ new book, The Lincoln Highway, we find eight-year-old Billy Watson in a railroad freight car waiting for his brother to get back. It is the 1950s and Billy and his older brother Emmett are riding the rails east to New York from Nebraska. A man drops into the car. The boy strikes up a conversation with him and finds out that his name is Ulysses. Billy asks Ulysses who he was named after, and Ulysses tells him he was named after Ulysses S. Grant. But Billy disputes this because he has read Professor Abacus Abernathe’s Compendium of Heroes, Adventurers, and Other Intrepid Travelers and knows the story of the Greek Ulysses (the Roman name for Odysseus) from Homer’s Odyssey.

Little Billy asks the over-six-foot Ulysses if he would like to hear the story of the historical Ulysses from his book. So Ulysses sits down beside the boy and listens to him read the story of Ulysses, who wanders for ten years, impeded by one misfortune after another, before he finally arrives home. Listening, Ulysses is reduced to tears, seeing in the story of Homer’s Ulysses his own story.

He tells Billy he was a soldier who left his pregnant wife in order to fight for his country in the War. She told him that if he went she would not stay, and when he returned several years later she and his son were gone. He has ridden the rails across the country for eight years trying to find them. Although the sorrows of his own odyssey have brought him to tears, the story of Homer’s Ulysses gives him hope that he, too, will ultimately find his wife and son.

It has been said of The Lincoln Highway that its theme is “inheritance.” This theme is not just a great theme for a book; it is and must be the theme of any good education system. The great stories of our Western Christian heritage have been handed down to us for hundreds—even thousands—of years. Until very recently, everyone expected our schools to be the main conduits through which we pass these stories down from generation to generation. Unfortunately, many of our schools seem to have forgotten this.

The telling of the great stories—as they are embodied in the literature and history of the West—is not just one of the jobs of a school—it is the central job of a school. The liberal arts and the great books are not just window dressing for the vocational instruction that many of our schools focus on—they are the main thing.

A good curriculum is at the core of this project—one that includes history, literature, and the bodies of knowledge about God, ourselves, and our world that we call the “sciences.” It should also include instruction in the skills required to know well these things that we call the “liberal arts.”

This is what Memoria Press’ Classical Core Curriculum is designed to do. It’s not quite Professor Abacus Abernathe’s Compendium of Heroes, Adventurers, and Other Intrepid Travelers, but it’s pretty close.