Every subject that is systematic has a certain inherent order to it that dictates how it should be approached. In some subjects this order is more explicit than others. In mathematics, for example, there is a widely acknowledged sequence in terms of what should be learned and when it should be taught. In other subjects, however, such as history, there is much less agreement on how and when certain things should be taught. Mathematics is a systematic subject in a way that history is not.

The subject of logic is, in large part, about order, and so we should not be surprised to find that there is a fairly explicit and well-defined approach that classical Christian educators can take to the subject.

When to Begin the Study of Logic

One of the most common questions parents and teachers interested in classical education ask about logic is: “When should I start teaching logic to my student?”
The answer, of course, is: “When he or she is ready.” This usually happens between seventh grade and ninth grade. It is at this age that many children begin to seriously investigate the reasons for things. They are no longer satisfied with the concrete, but are beginning to understand and appreciate abstract ideas.

I should point out that most modern logicians disagree with this view of logic as a language art. They view math as an extension of logic, and because of this the system of modern logic is very mathematical. But here we are discussing traditional logic, which is very different from modern mathematical or symbolic logic.

The Different Branches of Traditional Logic

The argument begins with a universal truth, “All men are mortal,” and ends up with a particular truth: “Socrates is mortal.”

Inductive logic reasons from particular facts to universal conclusions. Here is an example:

Every mammal that has ever been examined has hair
Therefore, all mammals have hair

Here, specific instances of mammals being found with hair are said to justify the general conclusion that all mammals have hair. The missing premise in all inductive reasoning is that the future will always be like the past, a premise that has been the subject of much debate in the philosophy of science.

So, given this breakdown, let’s set forth several rules governing the sequence of logic study. 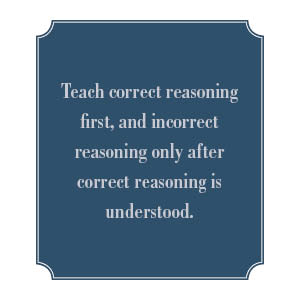 This rule flies in the face of the way logic is often taught. In fact, it is not uncommon for only fallacies to be taught in some “logic” programs—to the exclusion of all else. Of course, we would not tolerate this way of doing things in any other subject. Can you imagine teaching students a list of the things that did not happen in history, expecting them to learn what actually did happen from these falsities? Or exposing them to examples of bad writing as a preparation for writing well? If a science teacher spent a whole year having his students examine great experiments that failed, we might suggest he find another line of work.

This is a fairly common procedure in most logic texts, and for good reason. Deduction is not only simpler and more straightforward than induction, but deduction is a more fundamental thinking skill than induction. When asked why we believe something, we are much more likely to resort to deduction (usually an incomplete deduction) than induction. The reason is very simple: Induction, by its nature, seeks a laboratory—or maybe the assistance of a magnifying glass and a deerstalker cap. Deduction requires only a comfortable chair—and a little concentration. Induction is more the province of the expert; deduction is the right of the amateur. And, let’s face it, most of us are amateurs in most things.

While, as we have already observed, logic is not the same thing as math, it does share one important characteristic with mathematical disciplines: It is systematic and orderly. If a subject should be studied according to its inherent nature, and the inherent nature of logic is orderly, then it doesn’t take a great logician to conclude that that’s the way it should be studied.