For many who study Latin, the ultimate goal is to read the classic literature of Rome—one of the foundational elements of Western civilization—in the original language. But, while on the path to reading Caesar, Cicero, Vergil, et al., the study of Latin subtly but surely enhances the way students express themselves in English, and, most noticeably, expands their English vocabulary.

No other foreign language equals Latin in helping a student develop a rich English vocabulary. It has been estimated that fifty percent of English words are derived from Latin, with that share exceeding sixty percent for more difficult, polysyllabic words. Certainly we see these derivatives from Latin all throughout our language. Indeed, English is so indebted to Latin that classical scholar Berthold Ullman remarked a century ago that our language would more properly be named “Latin-English.”

Studying Latin is an introduction to etymology—how words are formed and how original meanings are extended. Knowing the original Latin meanings of English derivatives allows students to use these words effectively, and thus to elevate their daily speech and writing. Latin builds familiarity with how English words are formed from prefixes, base words, and suffixes. When students can see how a word was born—its components and its original meaning—they understand it more profoundly. Latin stirs a perpetual curiosity about words and teaches students how to analyze words and make them their own.

Part of Latin study is understanding how compound verbs are created from simple verbs by adding prefixes. By knowing the meanings of the prefixes, which are generally from Latin prepositions, students understand a host of new verbs. Consider this Latin verb and its principal parts: jacio, jacere, jeci, jactus (to throw, hurl, cast). Just a few of its many compounds are conjicio, dejicio, ejicio, objicio, and projicio. Even before consulting a dictionary to confirm their ideas, students can figure out rough literal meanings for the English derivatives conjecture (throwing [ideas] together), dejected (cast down), ejected (thrown out), objection (something cast against), and projectile (something hurled forth).

Meaning According to Context

Latin study advances one’s skill in using context to discern the nuances of a word’s meaning. For example, Latin students often encounter the multi-purpose noun res (thing) and must determine its specific meaning in each instance. To do so, they must consider the context and mentally sift through options like “matter,” “affair,” “fact,” “event,” “case,” “action,” “news,” “operation,” “circumstances,” and “development.” Similarly, for the adjective magnus, the meaning “great” is often suitable, but for variety and precision the student may choose a different English word to suit the context, e.g., “important,” “momentous,” “loud,” “heavy,” “distinguished,” “utter,” “vast,” “extensive,” or “lofty.” This kind of analysis enhances the student’s facility with words and builds vocabulary.

For another example, the participle dejectus, from the verb dejicio, in one passage may refer to a cavalryman “thrown down” from his horse, but in another passage may mean more figuratively, “dejected, downcast, disappointed.” The skill of using context to assess a word’s meaning transfers easily to English. 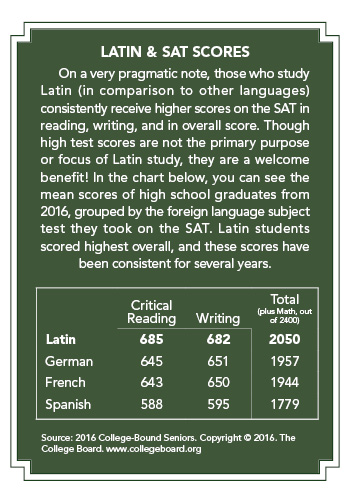 A familiarity with Latin aids the reader of classic English literature. The writings of Shakespeare, Jane Austen, and John Milton, to name a few, are replete with words of Latin origin. Shakespeare, for example, uses many Latinisms, words that vividly suggest the original Latin meaning. These words are not now readily found in a dictionary, but a student who is at the level of beginning to read Caesar is able to make an educated guess at the meaning of these Latinate words. A few examples illustrate this:

The Latinate names that Shakespeare invented for some of his characters are hidden gems that students take pleasure in discovering. The name of the ill-natured Malvolio, in Twelfth Night, comes from Latin words for “ill-wishing.” In The Winter’s Tale, the king’s daughter—unaware of her true heritage and living far away from home as a shepherdess—is aptly named Perdita, the feminine form of an adjective meaning “utterly lost.” And one of Shakespeare’s loveliest heroines, Miranda of The Tempest, fittingly bears a name that means “she who is to be marvelled at, she who is to be admired.”

Shakespeare’s Latinate words make for a sublime richness of meaning. As students recognize them and countless derivatives all throughout English, they wake to see Latin everywhere. Being able to see that Latin is ubiquitous is a delightful, enriching legacy of Latin study.

Bonnie Graham is currently writing a Memoria Press study guide for Henle Second Year Latin. A homeschooling mother for 13 years and a Latin tutor, she is fascinated by Caesar’s De Bello Gallico, the writings of Caesar scholar T. Rice Holmes, and the Latin language.