There are a lot of good reasons for thinking that Latin should be restored to its former place of honor as the Basic Subject in the elementary years. In previous issues of the Classical Teacher, I talked about some of these. But knowing that you should teach it and knowing how to teach it are two entirely different things. How can a busy homeschool mom with no background in Latin even hope to teach this sometimes difficult subject? I can answer this question. I can answer it because, at one time, I was a homeschool mother who didn’t know Latin. Here are some suggestions for how those who don’t know Latin can successfully teach it. 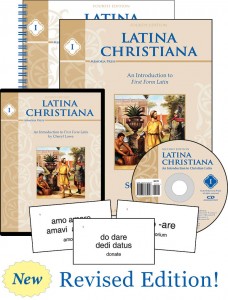 ry Latin program, but it is unrealistic to think that children will learn Latin without a teacher. They cannot be handed a Latin program and be expected to learn this rigorous subject alone. Many parents, in fact, have had a year or two of Latin. That will certainly make it easier, but it is not necessary. Latin programs like Latina Christiana are designed for exactly this purpose: to enable people who don’t know Latin to teach it.

Do it in a group setting. I recommend, if possible, organizing a small Latin class, either within a family or by combining children from several homeschooling families. A mom, or several moms, in your homeschooling group may very well relish the task of learning and teaching Latin for interested families. Peer pressure (the fear of showing up unprepared) is great motivation for students to keep up with the daily work of mastering forms and vocabulary. Unless you have a large family yourself, you’re unlikely to be able to take advantage of this dynamic unless you do it with other families. Group recitation of forms, vocabulary, prayers, songs, and competitive games make learning Latin a lot more fun.

Pace yourself. Most people overestimate what they can accomplish in one year and underestimate what they can accomplish in five. One reason for starting Latin in the 3rd or 4th Grade is to give you and your children plenty of time to learn a challenging subject. Learning Latin may seem like an overwhelming task but when it is broken down into one workable lesson a week, it becomes just a matter of discipline: all you have to do is “stick to it”.

Approach it as a basic subject. Latin must be approached this way, just like arithmetic. We give our children seven or eight years to master arithmetic. It’s part of the daily routine. No one thinks of dropping arithmetic because the kids don’t like it or because it’s hard, boring, or not needed anymore because of computers. Latin must be thought of in the same way. Students derive their expectations from parents, and if Latin is presented to them as a basic subject necessary for a complete education, like math, they will accept that and learn it, year after year. If it is presented as a new subject that’s going to be lots of fun, or as enrichment, or optional, then when it gets to be routine and hard, students will want to drop it and take up something else that appears new and fun. In order for your children to understand Latin this way, you have to understand it this way yourself.

Keep Latin front and center. Make Latin the center of your language arts curriculum, not something your child is required to do after he has completed all of his other “English” assignments. You may find that a lot of those assignments are unnecessary. Children will be a lot more positive about doing Latin if they see that it takes the place of some of the English work they disliked anyway, instead of being additional work to do after an already overloaded curriculum has been completed. For instance, there certainly is no need for Latin students to study a separate English grammar or vocabulary course. I also design most of my history and geography study around Latin, as well as some spelling and composition. Students feel that their subjects are being consolidated rather than expanding; their retention increases because much of what they are learning is connected. Properly taught, Latin provides the focus and direction necessary for the elementary curriculum.

Teach the history and culture associated with Latin. Students will be unmotivated to learn a language if they know nothing of the people who spoke it. The Story of the Romans is a delightful introduction to history. Students will learn about the natural virtues of the Romans and why they have inspired so much admiration throughout history. Since the Romans are more suitable for younger ages, it is best to sacrifice chronological order and study Rome in grades 3-5 and Greece in grades 6-8. Students will then have the opportunity to compare and contrast the Greeks and the Romans and understand their impact on subsequent history. After this foundation in the classical age, students will have a deeper knowledge of “the fullness of time” and have some appreciation of the momentous change brought about by the coming of Christ. Latin continued as the language of learning through the Middle Ages and the Renaissance. Studying ancient and medieval history along with Latin makes both the history and language come alive in a way that simply is not possible when either is studied alone.

Have fun while you’re at it. If you approach Latin with enthusiasm, then your children will pick up that love and enthusiasm too. Teaching techniques are important in Latin. Memorization through oral drills and recitations can be fun. Singing songs and saying prayers in Latin motivates students and makes Latin a part of everyday life. The greatest satisfaction, however, is the feeling of accomplishment when something is finished. When the child looks back over what has been learned in one year, it can be exhilarating. At the end of the third grade, students can say over twenty sets of grammar forms and twenty-five Latin sayings from memory. They look at each other and can’t believe they did it. When we have learned all five declensions, we have a celebration. It is a great feeling. When we have a test over all four conjugations, six tenses, active and passive voice, it is a milestone.

Latin is methodical, it is systematic, it is cumulative-and it is relentless. The student thinks it will never end, he will never learn it all. But then one day he is sitting on top of this mountain we call Latin grammar and thinking to himself, “Well, I guess it really wasn’t that difficult after all.” He has learned an important lesson in life: hard work and perseverance, not genius, are the keys to success.