When I was in junior high school, I had a horse named Lady Anne that could count to three. I would say, “Count to three!” and she would scrape the ground three times with her right hoof. She could do it for one and two as well. She also nodded her head when she was told to say “Yes,” and shook her head for “No.” For me it was a chance to impress my friends. For her it involved a carrot. I have often wondered how much time I could have saved over the ensuing years if I could have taught her how to do my math homework.

I grew up watching Roy Rogers on TV. Although Lady Anne was smart, Roy Rogers’ horse Trigger was even smarter. According to the movie credits, he was the “smartest horse in the movies.” There was no doubt about it.

There is one scene in Son of Paleface in which Bob Hope, unaware that he is sharing a bed with a horse, fights with Trigger over the blanket. And there is one movie in which Trigger actually dances to a song. It’s pretty amazing.

We hear stories more and more often these days about how intelligent animals are and how this shows how similar they are to humans. Some of these accounts directly attack the traditional view that man is essentially different from the animal. The modern theory that man is essentially the same as the animal often stems not from accounts of animals who can count or dance, but who can speak.

Perhaps the most famous example of this is Koko the gorilla, whose handler has said that she understands more than 1,000 signs based on American Sign Language and 2,000 words of spoken English. Koko is used as an example of an animal that seems practically human.

But does this really mean that humans are not different in kind from animals, but just in degree? Are humans just advanced animals?

The traditional view is based on a longstanding set of distinctions that originate with Aristotle. These distinctions are articulated most clearly in the “Porphyrian Tree,” a division of the different kinds of substances.

The Porphyrian Tree shows the metaphysical distinctions between substances, bodies, organisms, animals, and men. Each one of these things is distinguished on the basis of an essential difference (the first column in the tree). 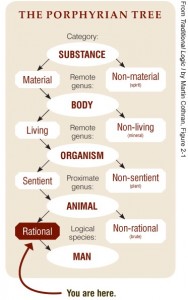 Each of these differences—materiality, life, sentience, and rationality—mark off a specific set of things from a more general set of things on the basis of some essential feature.

As we see from this, the faculty that distinguishes the species MAN from the genus ANIMAL is rationality, and this rationality has been said to consist of some inherent metaphysical abilities unique to humans.

Speech has always been seen as the chief distinguishing characteristic of human beings. But while we have always known that animals communicate—beavers flap their tails to communicate danger, dogs bark to ward off intruders, cats urinate to communicate the boundaries of their territory—the kind of speech that is thought uniquely human is rational speech. The traditional view has always held that humans are rational and brute animals are not.

What does this rationality consist of?

Lady Anne could eat a carrot. She could probably even think about eating a carrot. But she couldn’t think about the idea of “eating a carrot”—or the idea of “eating” or the idea of “carrot.” This involves some kind of abstract conceptual realization of which animals are incapable, but of which humans, as rational animals, are capable. Presumably this was the case with Trigger’s acting and dancing. He did it because he knew he would be rewarded for doing so, and that’s about it. But he couldn’t abstractly reflect upon having done it.

Animals can think, but they can’t think about thinking.

This conceptual aspect of speech is accompanied in humans by the ability to predicate. When I say, “Some horses are able to dance,” I not only abstract the idea of “horse” from all particular horses and “the ability to dance” from all particular instances of dancing (in other words, conceptualize them and treat them as if they existed apart from the things or actions themselves). I do something else. I also connect the two concepts “horse” and “the ability to dance” together in predication.

Finally, we can take the statements in which we predicate one thing of another and infer other statements from them:

In order to logically infer, I must be able to predicate. And in order to predicate, I must conceptualize. These three faculties are what make up the process of rationality.

If she could have done it, I would have given her another carrot.