People who pay attention to education know that the question of how to teach children to read is a controversial one. But what they may not know is that it only became controversial relatively late, historically speaking.

There was a time when there was no phonetic alphabet as we know it. Written language, in fact, began with pictures that represented ideas. The most familiar example is Egyptian hieroglyphics. But the invention of the alphabet―a set of symbols that represent, not ideas, but sounds―was a revolution of huge cultural proportions. Most historians attribute this innovation to the Phoenicians, a race of commercial traders who needed an easier way to communicate and conduct their business.

Rather than having to learn thousands of different symbols representing all the different spoken words in a language, the invention of the phonetic alphabet allowed the quick learning of a few symbols that could be parlayed into a multitude of words.

Later, Greek and Roman students were taught their language’s alphabet and how it was used to form words. Quintilian, the great Roman teacher of rhetoric, begins his Institutes of Oratory, written in the first century A.D., with an account of how children should be taught the letters and sounds of the Roman language. In our own country, we can trace the phonetic approach to reading and spelling back to the very first school text: the New England Primer, published in 1690.

The first challenges to the phonetic approach to reading in the United States came from people like Benjamin Franklin and Noah Webster during the founding period. They wanted to reform English spelling partly in order to iron out some of the language’s irregularities, but also to standardize spelling across the different regions of the new nation. Their motivation was primarily patriotic: they wanted a uniform language with standardized spelling that would unite the nation, not just politically, but linguistically. Their attempts at such reforms were met with little success.

It was not until the middle of the 1800s, however, that any serious challenge was mounted against the dominant phonetic method of reading. Horace Mann, the father of American public schools, came back to America after a visit to Europe determined to change the way reading was taught—from a bottom-up approach in which letters and sounds were learned before words, to a top-down approach in which words were learned first. Mann’s method came to dominate the teaching of reading in many parts of the country and inaugurated the “reading wars” as we have come to know them―the seemingly ceaseless contest between phonics and whole-word approaches. 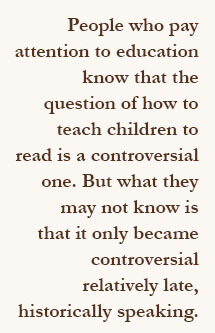 Mann had visited Europe during its historically brief flirtation with the “child-centered” romanticism advocated by figures such as Johann Heinrich Pestalozzi and his student Friedrich Wilhelm Froebel. This education romanticism most affected Germany and England (Mann was particularly impressed with the Prussian schools), although these two countries had largely righted themselves by the mid-twentieth century.

The whole-word method reasserted itself with a vengeance in America around the turn of the twentieth century, with prominent educators such as Colonel Francis Wayland Parker, an influential Massachusetts superintendent, John Dewey, and Dewey’s teacher at Johns Hopkins University, G. Stanley Hall, all appealing to developments in child psychology to press their case. But it was William S. Gray, Dean of the University of Chicago’s School of Education, and Arthur I. Gates, the Director of the Institute of Education Research at Columbia University, who were instrumental in the decades-long dominance of whole-word reading. From the 1920s, when Dewey’s progressivism came to dominate the nation’s schools, whole-word approaches reigned supreme.

It was the whole-word or “look-say” approach that produced the popular “Dick and Jane” readers, developed by Gray for Scott Foresman Publishing, that became familiar to several generations of American students. It was this approach that was savaged by one of the most popular books on education ever written: Why Johnny Can’t Read, by Rudolf Flesch, a book that landed like a bombshell in 1955 and has remained in continuous print ever since. The book launched a full-scale assault on the “look-say” reading method and reignited the “reading wars” that have continued to this day.

Flesch, an editor at The Saturday Evening Post, one of the most popular magazines of the time, used his prodigious skills as a popular writer to undermine the credibility of the whole-language approach, calling it the “Chinese approach” to teaching English, pointing out that it tried to teach English, a phonetic language, as if it were a picture language like Chinese. To do this, he argued, was to abandon the numerous advantages phonetic languages have over non-phonetic languages.

Flesch’s widely read book discredited the whole-word method among much of the reading public but had limited effect on the education establishment, which for the most part refused to change its emphasis on “look-say,” a fact that Flesch himself complained about in the sequel to his original book, titled Why Johnny Still Can’t Read, which was published in 1981.

But despite the intransigence of the education establishment, the fifty years following the publication of Flesch’s first book saw the progressive deterioration of the credibility of the whole-word approach.

The next blow came with the publication in 1967 of Jeanne Chall’s Learning to Read: The Great Debate. Chall’s credentials included the fact that she headed the Harvard Reading Laboratory. The book catalogued the mounting research in favor of early instruction in phonics. Chall took a less polemic approach to the issue than Flesch and cited a wealth of research evidence in favor of phonics.

The growing evidence put increasing pressure on those in charge of the nation’s schools to rethink their loyalty to an approach that was beginning to lose its credibility even in the research community.

Finally, in 2000, the National Reading Panel released its report, which was all but the last nail in the coffin of the view that the whole-word approach to reading instruction best served the interests of children. One of the largest research projects ever conducted, it reviewed all of the existing research on reading and found conclusively that early, systematic instruction in phonics is the best way to teach children how to read. Although the panel’s report has not quieted all opposition to phonics, it has succeeded in breaking the death grip of the whole-word approach on reading instruction in the nation’s schools.

Most reading instruction today, although couched in rhetoric about “balanced” and “mixed” approaches, at least reflects an acknowledgment that early training in letter-sound correspondences and the basic patterns of English spelling are essential to good reading instruction. Major education publishers have now aligned their programs to the Reading Panel’s basic recommendations (partly because states such as California and Texas, the largest purchasers of school textbooks, now require phonics instruction).

The contests over reading today resemble not so much a war as they do the clearing of the field after battle. The “reading wars” are over and phonics has won. The details about the best phonics methods still need to be worked out; but at least now we can read in peace.

One thought on “This History of Phonics”