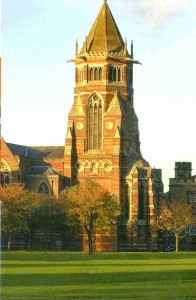 The centuries-old and nearly universally accepted method of teaching Latin is known as the “grammar/translation” method. But for well over a hundred years there has existed, mainly in England and the United States, a small but devoted segment of the Latin-teaching community that has advocated a very different method of Latin instruction.

This group of dissenters has viewed the grammar/translation method, with its heavy dependence on memorization of the complicated grammatical forms of Latin and its emphasis on written translation exercises, as being too tedious, too difficult, too boring, and too likely to lead to a loss of student interest.

This new approach is known by a number of different names, the principal ones currently being the “Natural Method,” the “Direct Method,” and “Living Latin.” But whatever name is employed, the methods are essentially the same in that they are all conversational methods and rely heavily on the use of spoken Latin in the classroom and purport to be a return to the methods of medieval times and the Renaissance when the vernacular began to replace Latin as the language of the universities.

Advocates of this newer method believe that all instruction by the teacher, all student responses and questions, and all textbooks must be in Latin only, with no English permitted in the instructional process. These practices are seen by its adherents as a remedy to the “grammar grind” that has prevailed for over a thousand years.

But the Natural/Direct Method was never generally used as a teaching method. It is quite true that Latin was spoken in place of the vernacular almost entirely in the universities of Europe and England until the seventeenth century, and it is true that it was spoken a great deal during the last three or four years of grammar school instruction, but this concept was never a part of the teaching methodology during the six centuries in which the grammar school held sway in Europe.

The standard books used by boys entering those schools, be they the Colloquies of Corderius or Lily’s Grammar, contained English. Boys were taught in their native language until they knew the Latin grammar and syntax quite thoroughly and had spent a thousand hours or more reading, writing, memorizing, and reciting Latin.
Not until the students had been instructed thoroughly in Latin grammar by use of their mother tongue and had acquired a large Latin vocabulary did the classroom become Latin-only territory, as that was the main point of the grammar school—to prepare them for the complete Latin environment of the universities.

This was the practice at Eton, St. Paul’s, Ipswich, and Winchester, says T. W. Baldwin, author of a famous book on Shakespeare. The main instruction in the language had been accomplished using the mother tongue. What was required after that was practice, practice, and more practice in speaking, reading, and writing Latin. According to Baldwin, students first memorized their grammatical forms, then memorized their rules of construction in Latin and English, then made and memorized constructions in Latin on the basis of this knowledge, and began acquiring a vocabulary. 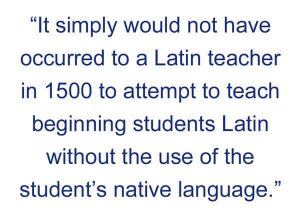 It simply would not have occurred to a Latin teacher in 1500 to attempt to teach beginning students Latin without the use of the student’s native language.

The Natural/Direct Method grew out of efforts in the late nineteenth century to reform the teaching of modern foreign languages. By the mid-nineteenth century, theories were sprouting up in France and England and particularly in Germany that proposed new ways of teaching modern languages.

In 1852, J. S. Blackie, a Scot, delivered two lectures advocating banishing the mother tongue from the classroom and teaching by a “direct association of objects with the foreign word” so as to break the “evil habit of continuing to think in the mother tongue.” In 1874, Lambert Sauveur, a Frenchman, advocated much the same thing. It was Sauveur’s controversial teaching method which became known as the “Natural Method.”

Blackie and Sauveur were just two of the forerunners of what became known after 1882 as the “Reform Movement.” The movement’s battle cry was “Death to rules and sentences!” This expression, derived from a pamphlet by one of its leaders, the German Wilhelm Vietor, was taken up by modern language teachers across Europe. The diverse group of Reform proponents advocated the primacy of speech, the centrality of the connected text, and the priority of an oral methodology in the classroom.

This movement marched under many names, including the “Conversational Method” and the “Anti-Grammatical Method,” and the “Natural Method.”

The period of reform lasted from 1882 to about 1914, and the method was never generally adopted in any country. Eventually, its advocates failed to show the effectiveness of their methodology. A 1912 report by the British government Board of Education, a 1917 book by Harold Pinter, and finally the “Leathes Report,” judged the results of the Natural Method “disappointing.”

In the grammar schools of England, the European mainland, and the American colonies, there was never any effort prior to the late nineteenth century to “banish the mother tongue from the classroom” before a student had developed a firm grasp of Latin grammar, vocabulary, and syntax.