Herman Melville is often criticized for his long digressions in Moby-Dick. But Melville does not digress. His thoughts—even six hundred pages of his thoughts—really were worth writing down. My students, holding the inches-thick volume in their hands and perusing the table of contents, have trouble believing this. Nevertheless, when I teach Melville’s great work, I begin with this assertion: He does not digress. Yet, in the eyes of the student, what idea can possibly justify one hundred thirty-five chapters of text? This is a very honest and fundamental question. The answer lies buried in the text itself, provided one learns how to look.

As a literature teacher, my primary goal is to cultivate in students an appreciation for the human imagination and its unparalleled power to convey truth. This 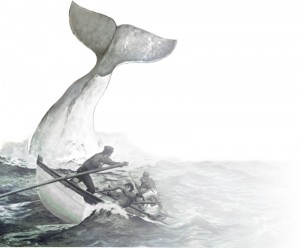 requires looking deeply into a text, past its sheer size and even its most tangible subject matter, to the greater significance beneath the surface. Melville’s novel proves invaluable as a means of training students to read in this way. He addresses his work directly to the reader’s imagination and, in doing so, defends the very practice of telling stories. His novel works as an apology for the human imagination, developing in the student a literary mind able to perceive and appreciate the truths apparent only through fiction. Moby-Dick derives its meaning and its greatness not from its sheer volume, but rather from its robust study of the human imagination and the titanic monster that is its subject.

Of course, I cannot wholly disagree that Melville appears to digress in his novel, but certain massive subjects justify the kind of extended attention Melville gives to his Leviathan. The sheer mass of the novel is commensurate with its high purpose. Often, readers interpret Melville’s great work as a sort of encyclopedic rapture with the whaling industry, but Moby-Dick is not primarily about whaling. Indeed, the true subject of its verbosity appears quite early in the text. In the first chapter, while discoursing on the general significance of the sea, Melville writes, with utmost simplicity: “There is magic in it.”

He goes on to explain:

Were Niagara but a cataract of sand, would you travel your thousand miles to see it? Why did the poor poet of Tennessee, upon suddenly receiving two handfuls of silver, deliberate whether to buy him a coat, which he sadly needed, or invest his money in a pedestrian trip to Rockaway Beach? Why is almost every robust healthy boy with a robust healthy soul in him, at some time or other crazy to go to sea? Why upon your first voyage as a passenger, did you yourself feel such a mystical vibration, when first told that you and your ship were now out of sight of land? Why did the old Persians hold the sea holy? Why did the Greeks give it a separate deity, and make him the own brother of Jove? Surely all this is not without meaning.

This last sentence expresses the core motivation behind Moby-Dick and the object that inspires Melville’s excited diversions. Melville witnesses a world remarkably full of meaning. He cannot help but remark. It might really be that simple: He sees magic—that is, meaning in the world that is greater than ourselves, our industry, and our science. You can believe the rumors about his having been paid by the page if you want; it does not matter if they are true. The breadth of Melville’s writing reflects the profundity of his vision. 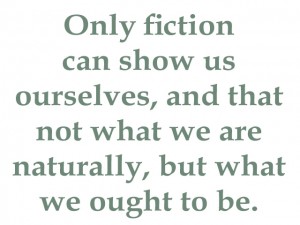 The object of this vision appears even before the opening chapter, in the prologue entitled “Extracts.” In this segment, Melville dedicates his opening lines to the entirety of the human imagination pertaining to whales. “Extracts” contains a thorough list of references to Leviathan—that great monster of the deep—from Scripture, science, song, and literature throughout history. He neither portrays himself as a whale-man nor as a poet, but rather as a “mere painstaking burrower and grub-worm of a poor devil of a [Sub-Sub-Librarian].” He is not primarily interested in the physical whale or the technicalities of whaling, but rather in the creature’s monumental symbolic force and the dramatic pageant of its capture. Moby-Dick does not describe the whale, but rather the massive presence of the monster in the human imagination.

Melville’s novel is not about whaling: It is about literature itself. Melville, who knows whales, still finds greater attributes in the human being, and not one of his one hundred thirty-five chapters fails at a symbolic representation of this most complex creature. Concerning the object of his interest, Melville writes:

Therefore you must not, in every case at least, take the higgledy-piggledy whale statements, however authentic, in these extracts, for veritable gospel cetology. Far from it. As touching the ancient authors generally, as well as the poets here appearing, these extracts are solely valuable or entertaining, as affording a glancing bird’s eye view of what has been promiscuously said, thought, fancied, and sung of Leviathan, by many nations and generations, including our own.

Melville, as an author, interests himself in the whale’s massive presence in the human imagination because its shape indicates to us our own humanity. Note Melville’s use of the word “promiscuously.” Science might formally show us nature, its machinery and practicality, but only fiction can show us ourselves, and that not what we are naturally, but what we ought to be.

Picture the power of a whale: its ease in the water, its size and strength. Picture also the man who hunts it: his courage, mad will, and wild ambition. The force of these images tends towards two significant inquiries, and these two together express humanity: What keeps us from pride, and what keeps us from despair? Scientific observation—that is, “veritable gospel cetology”—can show us the whale, yet it cannot tell us how we ought to respond. It cannot answer our deepest questions. Literature, however, 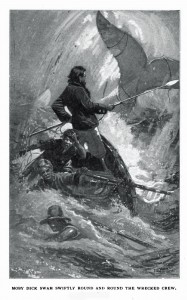 considering both of these questions, attempts to position mankind properly in relation to nature. For this reason, the ambiguous posture of humanity is metaphorically represented throughout Moby-Dick, a feature that forms the long and arching backbone of the novel. Humanity yearns for the ocean in Chapter One, wavers between shore and storm in Twenty-Three, aspires to Heaven, plummets to Earth in Thirty-Five, struggles against dependency in Seventy-Two, finds peace at the frenzy’s heart in Eighty-Seven, and is all the while shaped throughout the book’s entirety between the two opposing figures of Captain Ahab, named for a king, and Ishmael, the lowest of sailors. What is a human: a regal being or a lowly creature? No, Melville does not digress. He remains enduringly faithful to one central inquiry throughout his text.

The first mate, Starbuck, says it best: “Let faith oust fact. Starbuck looks deep down and does believe.” Through our imagination of the monsters of the deep, we feel strongly our desire to be what we are not—to be what we ought to be. Deep beneath the surface of this text, as though beneath the raucous waves of the sea, rests serenely man’s humility and wonder at his own being. The profundity of this perception—often missed because it does lie deep—lifts Moby-Dick like a buoy to the crests of literary achievement. By it, Melville conveys feelingly the true merit of imagination and its ability to figure both the destruction of human pride and the restoration of human glory. It takes a literary mind to navigate the sink and swell of such a wave. For this reason, Melville compels his readers to look at our world with his own vehement fascination: “Surely all this is not without meaning!”