Greek teachers find themselves in a difficult predicament in regard to the pronunciation of Greek. On one hand they have the option of teaching modern pronunciation (Demotic), and on the other, Erasmian. The primary difference between the two is in the pronunciation of vowels, but a few consonants differ as well. With Demotic pronunciation, used today in Greece and passed down from the medieval Byzantines, several of the letters and diphthongs—though they are represented by unique symbols in written Greek—are pronounced exactly the same. In the Erasmian system, every written symbol has a unique sound. Both approaches have advantages and disadvantages, but for many good reasons the system developed by Desiderius Erasmus (so called the Erasmian system) is the best system of pronunciation for Greek students today.

In 1267, Roger Bacon observed the dearth of Greek grammarians in Latin Christendom. Knowledge of Greek had all but vanished on the continent, and Latin dominated the West. But providence would not leave Europe in such a wretched state for long, for just when Greek was lost, it was found. After Constantinople fell to the Turks in 1453, Greek-speaking Byzantine scholars (who used what we now call Demotic pronunciation) migrated into southern Europe, and Greek language and ideas began to populate academies of learning, spurred on by the persistent refrain of the Renaissance, ad fontes (“to the sources”). In the words of Erasmus, “Chiefly, one must hasten to the sources themselves, that is, to the Greeks and the ancients.”

But as scholars in the fifteenth century began to study the Greek classics, they realized that the contemporary system of pronunciation imported by the Byzantines did not accurately represent the spelling of Greek words in the ancient Greek texts. For example, in the Demotic system several vowel sounds are pronounced as the single Greek vowel iota (which sounds like the i in “police”), a development that is known as Iotacism. The Greek words καλοί and καλή, which have different meanings and spellings, are pronounced the same (kahlee). Demotic pronunciation, therefore, obscures the fine phonetic distinctions necessary for young students to learn Greek spelling—which is critically important to understanding Greek grammar. 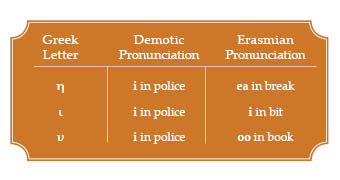 In response to this confusion, several scholars in the sixteenth century tried to resurrect the older system of pronunciation that would make sense of ancient spelling. A Spanish humanist named Antonio of Lebrixa first instigated this movement in 1503 by suggesting, among other things, that eta was the long form of epsilon. Per his suggestion, eta would be pronounced like the ea in “break” instead of like the i in “police,” as in the Demotic system. Then, in 1508, Aldus Manutius defended a humorous hypothesis about the pronunciation of βη, the noise that sheep make in Cratinus’ Greek poetry. He reasoned that sheep were unlikely to be saying “vee vee,” as they would be if using the Demotic pronunciation of βη βη, but rather the sheep probably blatted in the regular “bea bea” fashion, as was common in Cratinus’ day (and ours).

This pronunciation debate culminated in the publication of Erasmus’ Dialogus de recta latini graecique sermonis pronuntiatione (“A Dialogue Concerning the Correct Pronunciation of the Latin and Greek Languages”). Writing to the young sovereign Maximilian of Burgundy, the Dialogus is actually an overview of the ideal Renaissance education and the best pedagogical methods of instruction. According to Erasmus, a child of the Renaissance (and today) must learn to read the best literature in the two classical languages, Latin and Greek, but he must read it properly, as the ancients would have read it. To this end, he goes to great lengths to reconstruct the classical pronunciation of the ancient Greeks.

Concerned about the relative dryness of the material, Erasmus presents his treatise as a dialogue between a learned bear (representing himself) and a lion. The two unlikely friends discuss the education of the lion’s cub. The bear explains that he learned pronunciation by forming a club that read and reread, ad nauseam, the complete works of Demosthenes, Plutarch, Thucydides, Homer, and Lucian, which is nothing less than a herculean task. The bear also references the ancient Greek grammarians and draws analogies from Dutch, German, English, French, Italian, and Spanish. An average bear, of course, might know only one of these languages, but this was no average bear, you see—he had received a classical education.

The lion and the bear go on to articulate a system of pronunciation that Erasmus thought mirrored that of the ancient Greeks. The bear criticizes the tendency of contemporary Greek speakers to conflate the pronunciation of vowels, and he devises a system that uses a different sound to represent each unique letter. He agrees with Quintilian’s formula that “words should be written as they are pronounced.” A system like this, the bear argues, helps the student avoid mixing up his letters, and so it has superior pedagogical value. At the end, the lion concludes, “Obviously the pronunciation must have been different in antiquity than in modern Greek.”

The Erasmian system possesses great heuristic value for the new Greek student. By using the system of Erasmus, students learn a pronunciation system that allows them to quickly memorize the spelling of words, which is a vital part of learning an inflected language. And when students begin to read the classical texts of Aesop and Sophocles, the Erasmian system will make better sense of the words that they read. Finally, when students begin to recite the superlative Greek poets and quote the Greek of Matthew’s Gospel, they will do so clearly, without confusion or mistake. For good reason, then, Erasmian pronunciation is widely used in the academy today. Every student can learn Greek; Erasmus can help.

Mitchell Holley is a Greek specialist working on developing the Memoria Press Greek curriculum. Mitchell has a Master of Divinity and is currently pursuing his Master’s of Theology from the Southern Baptist Theological Seminary in Louisville, Kentucky.