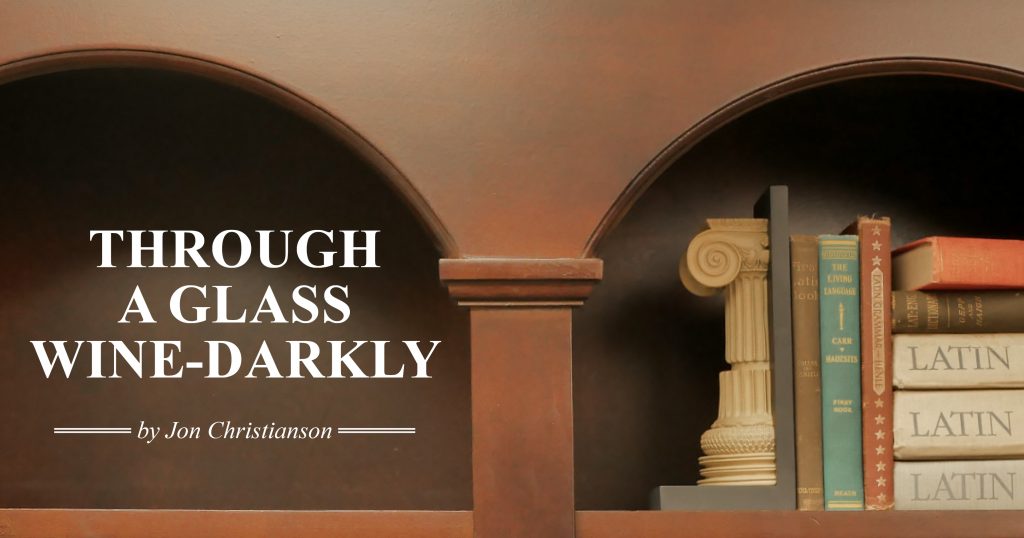 Have you heard the one about the color blue? The story goes that the Greeks had no word for the color. In Homer, things traditionally thought of as blue—the sea, the sky—go by gloomy words like “brazen” or “wine-dark.” Trivial as it may seem, this is the fact that launched a thousand speculative ships towards dubious frontiers: This proves, some say, that the Greeks had no concept of blue, or stranger yet, that the Greeks could not see blue at all. Some scholars of yesteryear went so far as to suggest that having no word for blue causes an inability to perceive or process the color.

While variations of these claims have enjoyed the rounds as pop-science topics du jour, the reach of their conclusions far exceeds the clarity of their premises. How does language relate to perception and understanding, and can one language foster this relationship better than another?

These considerations may dwell beyond the regular domain of the classroom Latinist, but the question underpins the goals of the entire discipline. A compelling case for the study of Latin in our century, beyond the prosaic benefits of a voluminous vocabulary and a leg up on the lexicons of medicine and law, is that Latin is a model for thinking and speaking that is more precise and less ambiguous than English. If an educator extols the merits of Latin on this basis—that Latin is a pathway to superior understanding—then it matters quite a lot what the Greeks thought about blue.

This is not a discourse on actual brain chemistry. One cannot approach language’s relationship to the brain (neurolinguistics) without trespassing on hotly contested ground. Theories and experiments abound on the subject, of which only the most extreme variations—such as the aforesaid Greek being literally colorblind to blue—have been roundly discarded. Discussion of the brain-language relationship, therefore, is essentially futile outside the laboratory. Psycholinguistics, however, refers to language’s relationship to the mind, a distinction that permits us to explore it. While still germane to the brain, we can talk about the psychology of language according to the mental models we develop through learning and practice. The intellect sorts perceived realities according to a mental architecture built out of symbolic systems that permit one to know more than one perceives. These symbolic systems are the bridge between perception and understanding.

Mathematics is an especially illustrative symbolic system of this kind. Our neural apparatus for perceiving number is actually quite weak; try to mentally picture exactly one thousand balloons. Mathematics is a system we have devised to render large and complex numerical realities into comprehensible symbols. “1,000” is a quality one can understand quite easily, and one can apply it to those balloons even as one’s natural enumerating faculties fail. That, in a word, is language; whereas, however, the quantitative symbolic systems of mathematics are largely universal, the qualitative symbolic systems of language vary demonstrably and to great degree. In assessing the differences between each language, we can approach how Greek and English handle the color blue, and how English and Latin compare as models for thought.

We can compare languages by the definition and use of words (semantics) and the structure and use of grammar (syntax). Of the former, no semantic study has been examined more extensively than color. English vocabulary has a huge spectrum of color words, from the essentials like “red” to tiny subgroups of red like “scarlet” and “vermilion.” This variety affords English greater precision; an English speaker hears “vermilion” and can reliably ascertain from it a very specific color. In contrast, Greek color words are fairly few and therefore must cover much larger swaths of the spectrum. The range of hues we describe as blue fall somewhere between the Greek words glaukos, meaning “green” or “gray” or even “bright,” and kuanos, meaning “dark” or “murky,” from which we derive “cyan.” A Greek speaker hears glaukos but cannot reliably deduce from the word as specific a color as in English.

Greek can fill the gaps with oblique metaphorical language, such as using words that describe a blue thing as a word for blue itself. Every language engages in this sort of metaphorical language, including English. However, while English uses such metaphors to expand a color vocabulary of extraordinary range and character—violet, ochre, salmon, saffron—Greek’s metaphorical vocabulary of this kind still results in a far scantier, and thus less descriptive, color lexicon than English. This certainly doesn’t make the color blue incomprehensible to a Greek speaker, but with Greek as one’s basis for mental models of color, the discrete quality of blue is lost beneath the murk and glare of less descriptive or distinct terminology.

Just as one can compare the semantic merits of Greek and English, it is in considering the syntax of English and Latin that the excellence of the latter shines. For example, Latin is an inflected language, such that the verbal qualities of person, number, tense, voice, and mood are always implicitly present in the formation of each verb. The Latin word do, which we translate as “I give,” is unambiguously first person singular present active indicative; unlike the English “I give,” whose verbal qualities are clear only so long as the context is clear, every verbal quality available in Latin is discretely present in do, just as it is in the more complex dabamini or dedissemus. This precision of Latin verb inflection facilitates thought and speech that describe actions and their relationship to each other with an intrinsic accuracy that English can only do extrinsically.

What makes Latin not merely different from but better than English in this regard is this ergonomic quality, this suitability to convey ideas correctly and consistently. The Latin tense structure suits the language to express tense relationships in a complex way. Latin verbs correlate in form to each other in time (past, present, or future) and aspect (incomplete or complete). Latin verbs have common stems indicating incompleteness (dat, dabat, dabit) and completeness (dedit, dederat, dederit), as well as common forms between tenses that correlate to each other across the present (est and datus est), past (erat and datus erat), and future (erit and datus erit). English can translate all of these verbs, but there are no such indicators of these relationships; “he gives” and “he gave” do not have any common forms with “he was giving” and “he had given” to correlate them with each other. English describes the same actions, but without the correlation across time and aspect.

Language does not shape our perception, but our understanding. The Greek and the Englishman may both look upon the same sea and perceive the same colors, but while the Englishman would understand the color to be its own separate category of color, the Greek would understand the color in relation to some color for which he has a category—perhaps a Homeric wine-dark. Just so, Latin provides various models of understanding that exceed those of English in clarity, order, and precision. Each language has its own traits that suit it for certain intellectual functions; English itself has its own excellences that exceed Greek and even Latin. However, those functions at which Latin excels are of great benefit to the classical student who seeks precise understanding of complicated truths.

Jon Christianson is the Latin director and editor at Memoria Press. He teaches Latin for the Memoria Press Online Academy and has taught Latin and classical literature at Highlands Latin School.