Discovering and internalizing the Central One Idea in a great work is vital for proper reading and for cultivating wisdom and virtue.1 There are four stages of acquisition and expression that can be used to lead the student (and teacher) to this Central One Idea.

The four-stage sequence is rooted in the trivium—grammar, logic, and rhetoric. In the trivium, grammar is language, logic (dialectic) is thought, and rhetoric is expression. Put another way, in the grammar stage, one accumulates the fundamental elements, features, and facts of a body of knowledge. In the logic stage, one arranges, connects, organizes, compares, and reasons with the facts learned and draws a conclusion(s). In the rhetoric stage, one expresses that conclusion/truth to others.

The trivium, she says, is the instrument of all education at all levels because the arts of grammar, logic, and rhetoric govern the means of communication—namely reading, writing, speaking, and listening.

The trivium is a movement from distinct parts into a synthesized whole. The three stages guide the student to relate the facts learned into a unified, organic whole. Marguerite McGlinn, introducing Joseph’s work, says, “The trivium teaches us that language evolves from the very nature of being human. … We invent symbols to express the range of practical, theoretical, and poetical experiences that make up our existence.”

We can see, then, that the trivium has much to do with being human, with negotiating our lives. It reveals the ontological reality within us through our use of reason and language. The trivium embodies how we think, how we learn, and how we communicate.

In our particular context of studying a great work, the teacher has firmly in mind the abstract singular truth that he or she wishes the student to learn, which is the Central One Idea of the work. Though popular culture may be fond of saying, “It’s not the destination that counts, but the journey,” nothing should be further from classical teaching and learning. For both the journey and the destination count, but especially the destination, which is the understanding and expression of the central idea of the work.

To begin, the Pre-Grammar stage prepares the student for receiving and understanding the Central One Idea by invoking his prior knowledge, experience, or interests concerning that idea. Just as Socrates believed that the truth he wanted his interlocutor to understand was already within him, in some way or part, the Central One Idea is already within the student. Thus, it is helpful to cultivate the soil in preparation for planting the seed. In this preparatory stage, the student is merely asked a few questions about something related to the Central One Idea, or simply about the basic plot or subject of the work—to set him thinking in a certain direction. This is the shortest stage and can take as little as five minutes (though fine if longer).

In the Grammar stage, the student is presented with and discovers essential facts, elements, and features of the story (or play, poem, etc.). Here the student encounters many useful facts and learns new vocabulary words. In addition, the student becomes grounded in the basic features of the story through comprehension questions and learns new literary and rhetorical terms. In this stage, the student is presented with the basic grammatical units—facts, elements, features, ideas—that comprise the work, and becomes familiarized with new subject matter. New types or particulars are presented and discovered here.

In the Logic stage, the student reasons with the facts, elements, and features of the story or poem—sorts, arranges, compares, and connects ideas—and begins to uncover and determine the Central One Idea. He compares the new ideas and facts with similar things already in the mind, which gives rise to new conclusions. Importantly, the final conclusion, the Central One Idea, is often an abstract or general truth, though it may be expressed by means of a story’s particulars, such as a character’s action and discovery, etc. The best method for leading the student toward this new abstract truth is through the Socratic method. Socratic discussion questions in this stage are different than the comprehension questions used in the previous stage because they go further up and further in to abstract thought. Simply put, they are deeper questions with the intent of leading the student toward the Central One Idea. Socratic questions are intended for verbal discussion, and they also provide a good opportunity for the student to develop his note-taking skills.

At the end of this stage, the student should be ready to make a determination of what he thinks is the Central One Idea. This is not always easy, but the student should be encouraged to take this step, a kind of “leap of faith”—though not a huge leap over a dark chasm, but a short step relying on logic and evidence from close reading, study guide work, notes in a literature notebook, and attentive perception and reflection.

In the final stage, the student expresses what he believes to be the Central One Idea. The student’s ability to organize and express his thoughts is an important skill in this stage.

In this section, the first question asks the student to briefly summarize the plot, and the second to express the Central One Idea in a complete sentence. The reason for this is so the student will be forced to distinguish between a plot summary and the Central One Idea. The two are quite different. The former, of course, concerns the sequence of events in the story. The latter concerns a larger abstract truth—the central proposition at the heart of the story.

The third question asks the student to list three supporting points for his determination of the Central One Idea. The fourth and fifth ask for the opening lead and the closing amplification.

Finally, the student also writes down the teacher’s version of the Central One Idea—which is helpful for several reasons, the first of which is that it enables the student to draw a comparison.

In the last section of the Rhetoric stage, the student is presented with the opportunity to write an essay—to express the Central One Idea as the thesis to be argued for and defended in the essay. This improves the student’s writing skills and increases his rhetorical abilities.

These four stages enable the student to fully grasp the essence of what he is reading: the Central One Idea. 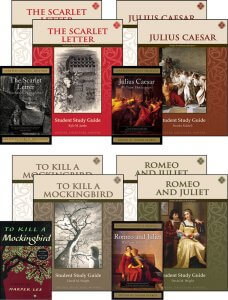 David M. Wright served as the director and author of the upper school literature curriculum at Memoria Press. He has taught AP Literature and English with a focus on the Great Books. He received his master's degree in English literature from DePaul University in Chicago and holds a Classical Teacher certificate from the CiRCE Institute. He is currently working on a Ph.D. in literature at the University of Louisville.