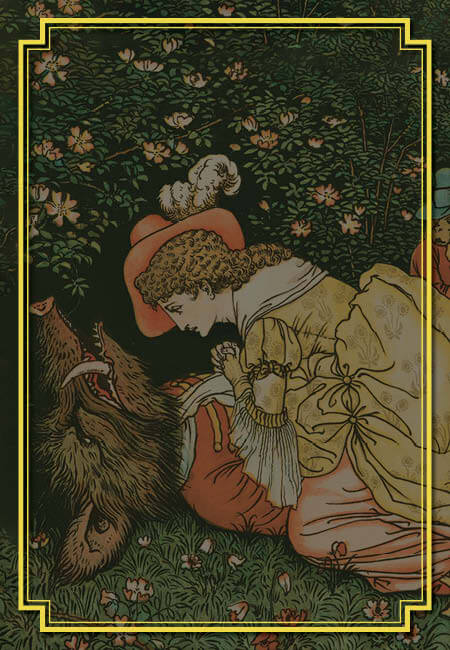 The American writer Flannery O’Connor spoke a simple but profound truth when she said that “a story is a way to say something that can’t be said any other way. … You tell a story because a statement would be inadequate.” The great fairy tales and fantasy stories capture the meaning of morality through vivid depictions of the struggle between good and evil, where characters must make difficult choices between right and wrong, or where heroes and villains contest the very fate of imaginary worlds.

The great stories avoid didacticism and supply the imagination with important symbolic information about the shape of our world and appropriate responses to its inhabitants. The contemporary moral philosopher Alasdair MacIntyre has summed this up eloquently:

It is through hearing stories about wicked stepmothers, lost children, good but misguided kings, wolves that suckle twin boys, youngest sons who receive no inheritance but must make their own way in the world and eldest sons who waste their inheritance … that children learn or mis-learn both what a child and what a parent is, what the cast of characters may be in the drama into which they have been born and what the ways of the world are. Deprive children of stories and you leave them unscripted, anxious stutterers in their actions as in their words.

Moral living is about being responsive and responsible toward other people. And virtues are those traits of character that enable persons to use their freedom in morally responsible ways. The mere ability, however, to use moral principles to justify one’s actions does not make a virtuous person. The late Jewish philosopher Martin Buber tells the story of how he fell into “the fatal mistake of giving instruction in ethics” by presenting ethics as formal rules and principles. Buber discovered that very little of this kind of education gets “transformed into character-building substance.”

Mere instruction in morality is not sufficient to nurture the virtues. It might even backfire—especially when the presentation is heavily exhortative and the pupil’s will is coerced. Instead, a compelling vision of the goodness of goodness itself needs to be presented in a way that is attractive and stirs the imagination.

The great fairy tales and children’s fantasy stories attractively depict character and virtue. In these stories the virtues glimmer as if in a looking glass, and wickedness and deception are unmasked of their pretensions to goodness and truth. The stories make us face the unvarnished truth about ourselves and compel us to consider what kind of people we want to be.

“Beauty and the Beast” is one of the most beloved of all the fairy tales because it contrasts goodness with badness in a way that is appealing to the imagination. It is also a story that depicts with special force the mystery of virtue itself. Virtue is the “magic” of moral life, for it often appears in the most unexpected persons and places and with surprising results. At the beginning of the story, we are told that a very rich merchant had three daughters, all of whom “were extremely handsome, especially the youngest; [so she was] called ‘The little Beauty.'” But nothing more is said about Beauty’s physical attributes. Instead, the story draws our attention to her virtuous character. Beauty’s moral goodness—her “inner beauty”—is contrasted with her sisters’ pride, vanity, and selfishness—their “inner ugliness.” Although Beauty’s sisters were physically attractive they “had a great deal of pride, because they were rich. They gave themselves ridiculous airs … and laughed at their youngest sister [Beauty], because she spent the greatest part of her time in reading good books.” By contrast, Beauty was “charming, sweet tempered … spoke so kindly to poor people,” and truly loved her father.

Because she is virtuous, Beauty is able to “see” the virtues in Beast that lie hidden beneath his monstrous appearance. At her first supper in the monster’s castle, Beauty says to Beast: “That is true [that I find you ugly] for I cannot lie; but I believe you are very good-natured.” And when Beast tries her even more with his repeated self-deprecatory remarks, Beauty responds emphatically: “Among mankind … there are many that deserve [the] name [Beast] more than you, and I prefer you just as you are, to those, who, under a human form, hide a treacherous, corrupt, and ungrateful heart.” The sharp contrast between Beauty’s goodness and her sisters’ badness (which is masked by their physical attractiveness) parallels the irony that the Beast, who is repulsive physically, is good and virtuous. “Beauty and the Beast” teaches the simple but important lesson that appearances can be deceptive, that what is seen is not always what it appears to be.

Similarly, this great fairy tale also bids us to imagine what the outcome might have been had Beauty’s sisters been put in her position. No doubt they would not have recognized or appreciated the goodness beneath Beast’s monstrous appearance. Nor does it seem at all likely that they would have made Beauty’s courageous choice. The truth that the story portrays is that unless virtue is present in a person she will not be able to find, appreciate, or embrace virtue in another.

“Beauty and the Beast” embraces one last important moral truth: A person’s decisions in life will define what kind of person she becomes. In this sense also our destinies are not fated: We decide our own destinies. At the end of the story, the “beautiful lady” who has visited Beauty in her dreams appears at Beast’s castle and brings with her Beauty’s entire family. The fairy then says to Beauty:

Beauty … come and receive the reward of your judicious choice; you have preferred virtue before either wit or beauty, and deserve to have a person in whom these qualifications are united; you are going to be a great queen.

Beauty’s sisters, however, are unhappy in their marriages because they chose their spouses solely on the basis of good looks and wit. Through greed, jealousy, and pride their hearts have become like stone. So they are turned into statues, but retain their consciousness that they might behold their sister’s happiness and be moved to admit their own faults.

Like all the great fairy tales, “Beauty and the Beast” invites us to draw analogies between its imaginary world and the world in which we live. It supplies the imagination with information that the self uses to distinguish what is true from what is not. But how, we might ask, is the imagination itself awakened, and how is it made moral? These are important questions for the moral educator, and they are not so easily answered.

The moral imagination is not a thing, not even so much a faculty, as it is the very process by which the self makes metaphors out of images collected by experience and then employs these metaphors to find and suppose moral correspondences in experience. The moral imagination is active, for well or ill, strongly or weakly, every moment of our lives, in our sleep as well as when we are awake. But it needs nurture and proper exercise, otherwise it will atrophy like a muscle that is not used. The richness or the poverty of the moral imagination depends on the richness or the poverty of experience. When human beings are young and dependent upon parents and others who assume custodial care for them, they are especially open to formation through experiences provided by these persons. 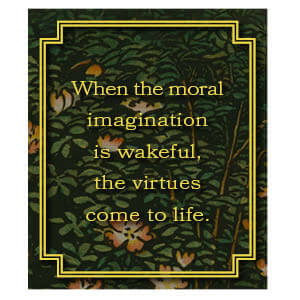 Fairy tales and fantasy stories transport the reader into other worlds that are fresh with wonder, surprise, and danger. They challenge the reader to make sense out of those other worlds, to navigate his way through them, and to imagine himself in the place of the heroes and heroines who populate those worlds. The safety and assurance of these imaginative adventures is that risks can be taken without having to endure all of the consequences of failure, while still receiving the lessons; the joy is in discovering how these risky adventures might eventuate in satisfactory and happy outcomes. Yet the concept of self is transformed. The images and metaphors in these stories stay with the reader, even after he has returned to the “real” world.

After a child has read Hans Christian Andersen’s The Snow Queen or C. S. Lewis’s The Lion, the Witch and the Wardrobe, her moral imagination is bound to have been stimulated and sharpened. These stories offer powerful images of good and evil and show her how to love through the examples of the characters she has come to love and admire. This will spur her imagination to translate these experiences and images into the constitutive elements of self-identity and into metaphors she will use to interpret her own world. She will grow increasingly capable of moving about in that world with moral intent.

When the moral imagination is wakeful, the virtues come to life, filled with personal and existential—as well as social—significance. The virtues needn’t be the dry and lifeless data of moral theories or the ethical version of hygienic rules in health science classes; they can take on a life that attracts and awakens the desire to own them for oneself. We need desperately to adopt forms of moral pedagogy that are faithful to the ancient and true vocation of the teacher—to make persons into mature and whole human beings, able to stand face to face with the truth about themselves and others, while desiring to correct their faults and to emulate goodness and truth wherever it is found.

Dr. Vigen Guroian is Emeritus Professor of Religious Studies in Orthodox Christianity at the University of Virginia. He is the author of Tending the Heart of Virtue, from which this article is excerpted, as well as numerous other books and articles on marriage and family, children’s literature, ecology, gardening, Armenian history, and medical ethics.