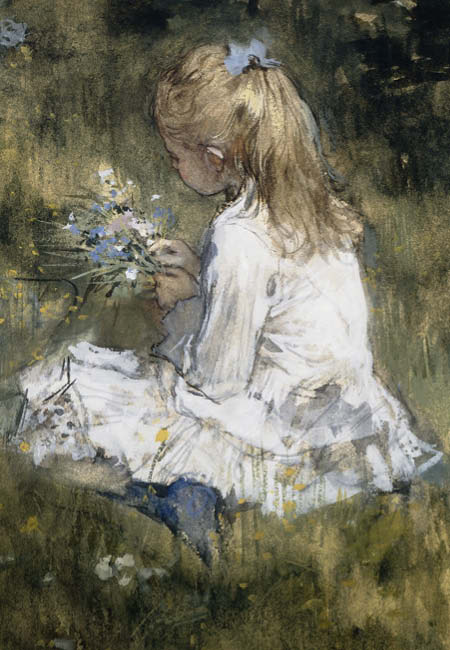 I have long been a devotee of classical education. For over a dozen years I’ve been teaching at a Catholic university dedicated to liberal education. Previously I taught at a college with an integrated Great Books curriculum. For two decades I’ve helped conduct seminars introducing teachers to the riches of liberal education. Moreover, both my wife and I experienced the transformative power of liberal education as students ourselves, an experience that has profoundly shaped the way we raise our children. We were blessed by our education, and we have always felt obliged to ensure that our children be blessed similarly.

Then came our seventh child, Maria, who has Down syndrome. Like most parents who have a child with special needs, we were thankful but also shocked at her arrival. Life became busier at first—appointments with specialists, extra medical tests, and so on. When things eventually settled down, we couldn’t help deliberating—worrying?—about Maria’s future. How different would she be from our other children? Could she be enriched by a classical education? Could she benefit from an education that seems so challenging, so dependent on memory and self-discipline, so deeply oriented toward an intellectual life marked by wonder and contemplation? We feared there were reasons to think not, but experience has proven otherwise—though it has not been without challenges and adjustments to our thinking. Educating Maria has enabled us to recognize more deeply both the potentiality of classical education and Maria’s own potentialities as a child with Down syndrome.

Classical education is sometimes maligned as elitist. Yes, in the ancient world liberal education was available chiefly to those with the free time and wealth to engage in such studies. In the Christian age, though, especially with the advent of religious life, liberal studies became more widely available to people from different social classes. And in a more democratic age like ours, especially in a society open to educational innovation and homeschooling, classical education is accessible to almost any and all who desire it, especially when technology makes resources readily available. This reveals what was always true about classical education: It is meant for any and all who are willing and able to engage in it.

Classical education turns out to be very customizable—to local communities, to individual families, and even to individuals with varying cognitive abilities. Indeed, our experience with Maria has helped us see just how “participate-able” classical education is. To be sure, classical education often presents itself—and rightly so—as marked by a determinate order of studies keyed to intellectual maturation, as informed by distinctions among arts and disciplines, and as exemplified in a canon of works containing the great intellectual achievements of the past. Yet all this well-thought-out complexity, all the deep-seated wisdom found in classical education, amounts to a vast treasury with dividends that can be bestowed differently and in varying amounts to those who invest themselves in it. Classical education, therefore, now strikes my wife and me as much more like a common good than a private one, i.e., as a good that is in nowise diminished when shared and that becomes more fully itself when shared diversely by an ever-expanding variety of people, including those with special needs.

So far, at least, Maria’s participation in classical education has been less cognitively focused than that of our other children. For the latter, classical education was illuminating and thought-provoking, even from a young age. They were intrigued and inquisitive about poems they memorized, stories they read, historical figures they encountered, natural and mathematical wonders they beheld. Maria’s participation, by contrast, has been more holistic, more communal. She has been ennobled by the struggle, and we’ve seen capacities for self-discipline that only the beautiful rigor of classical education undertaken with others seems capable of eliciting from her. Such ennobling has also taken place in our other children, of course, and indeed the success of classical education depends on this: that all students feel thus dignified. In our other children, though, this process has been mediated more by way of the intellect, whereas in Maria it is mediated more by way of her entire self, body and soul. Her dignification has been achieved, in other words, by her being treated as an embodied person challenged to be her best self, especially in how she carries her body and voices her thoughts in the presence of others with care, politeness, and exactitude. Classical education has leavened Maria’s embodied nature, thus revealing more splendidly to us the fullness of her personhood, which permeates and yet transcends her physical and cognitive disabilities. 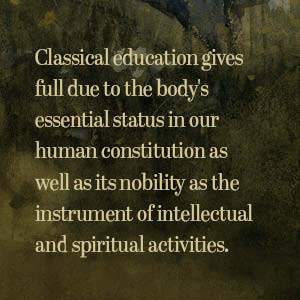 In subtle but pervasive ways, classical education gives full due to the body’s essential status in our human constitution as well as its nobility as the instrument of intellectual and spiritual activities. We see this in the attention given to gymnastike, the disciplined training of the body that is the initial intimation of our rational physicality. We see it too in the attention given to intentional use of the senses, regular encounters with nature’s splendors, the mathematical imagination, and vicarious experiences of individuals acting freely and unpredictably in great stories, both fictional and historical. Indeed, in opposition to most modern educational theories and trends, classical education strives deliberately not to put asunder the spirit and flesh that God mysteriously joins together in every human person.

In our minds, though, Maria’s experience with classical education has revealed something deeper about our embodied personhood, an aspect of it upon which all others may ultimately be predicated. At least as my wife and I have witnessed it, children with Down syndrome incline more strongly toward bodiliness than other children do. When it comes to maturation and sociability this has its downsides; in fact, to those unaccustomed to it, this inclination may be off-putting when it manifests itself. This is why the ennobling of Maria in and through her body has proved so crucial, and we imagine this could be true of other children with Down syndrome. Now, the positive side to Maria’s inclination toward bodiliness is that she lives in her body very instinctively and naturally. In so doing, she expresses something profoundly true about the human body—namely that it exists as “the substratum of the communion of persons,” as John Paul II asserts. Maria deploys her body to bring people together, closer to her and closer to each other. Maria has taught us, powerfully at times, that the deepest potentiality of the body lies in the underlying, ever-present opportunity for soul to encounter and affirm soul.

The ennobling that Maria experiences through classical education enables her to tap into this potentiality more purposefully, and thus to align her body in a more dignified manner with the affectionate—and often humorous—intentions of her blossoming soul. By presuming the body’s essential character and its indispensability as an instrument of higher activities, classical education contains within itself a key anthropological truth: Our bodies are made for the sake of each other, made to tie us together physically, emotionally, intellectually, and spiritually, made to draw us toward communion with one another in truth and goodness.

My wife and I still have much to learn about Maria and the importance of her participation in classical education. What we’ve learned thus far, though, are essential truths about the bodily personhood of human beings. Indeed, in light of the technocratic and even Manichaean attitudes toward the body in which our culture is steeped, such truths ought perhaps to be highlighted and explicated as we continue to reap the fruits of the tradition of classical education.

Matthew Walz, Ph.D., taught eight years at Thomas Aquinas College, and since 2008 has served as a professor in the Philosophy Department at the University of Dallas. Besides Aquinas, his favorite philosophical authors include Aristotle, Augustine, Boethius, Anselm, and Pope John Paul II. Matthew and his wife Teresa have eight children who keep them busy, but also joyful and grateful to God for His manifold gifts.