The art of logic is like math and writing and these other things: You can’t learn how to do them without actually doing them.

In this regard, most logic books are not logic books; they are books about logic. But doing logic and reading about logic are two very different things.

I noticed a post on a website recently that made reference to one particular book that was used in a logic course, one I had never seen before. It looked like a fine book about logic, and one that I will probably pick up for my own enrichment. It defines logic, divides it, and generally explains what logic is. Now that certainly is a part of actually learning logic, but just reading and studying a book like this will not train you to actually use logic yourself.

There is another popular book which I actually have in my library. It is a useful book for someone who knows logic or generally how to argue. It has a lot of great tips about things you should do when you are actually engaged in argumentation, but, like the first book, it doesn’t actually teach logic. The rules are correct—and they are useful, but, like most such rules, they are most useful to those who have already learned the subject, and of very limited use to those who haven’t.

These are books about logic. They are not logic books. 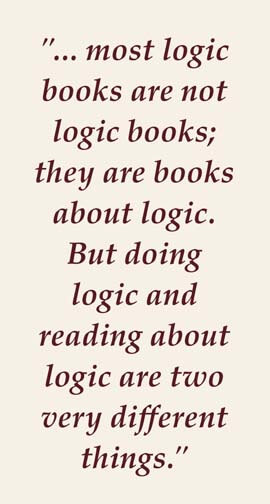 The same is true about most books that teach fallacies. Of course, they do not really teach fallacies. There wouldn’t be much use in having students learn how to commit fallacies, would there? What these books do is teach students how to identify certain bad argument forms, but without a fuller understanding of logic, they will not understand why they are wrong. It is difficult to say why something is not correct reasoning when students have only studied incorrect reasoning.

Besides, simply identifying something is not much of a defense. I can identify the gun in the hand of an assailant, but it will do little good in not getting shot.

In order to be able to use logic, you have to spend time methodically learning a number of particular concepts and practice them repeatedly. You then have to practice applying these concepts to arguments, and know how to internally manipulate arguments.
To master logic, you have to understand the basic uses of words, the types of logical statements, and the rules of validity for arguments. A student who really knows logic will know how to construct his own arguments of different specific kinds, how to back into a missing premise, and how to turn categorical arguments that are not in deductive form into ones that are deductive in structure.

Most modern logic programs pass these things over because they are books about logic rather than logic books.

If a student is able to do these things competently, then he knows all the important aspects of logic. If he can’t, then you cannot say he knows how to “do” logic. A true logician is a practitioner of the subject, not a spectator only.