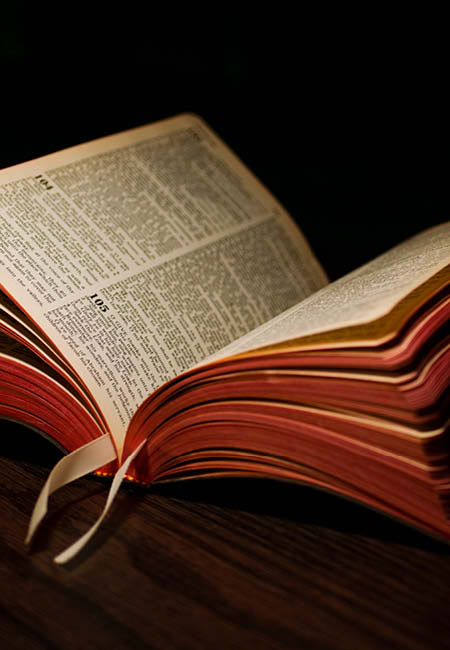 It is an interesting irony that, at a time when so many Christians have abandoned the King James Bible, a prominent atheist should come forth to praise it.

In celebration of the four hundredth anniversary of the King James Bible in 2011, the famed unbeliever Christopher Hitchens paid it gushing homage in Vanity Fair magazine, where he argued that the dignity of its prose, the beauty of its expression, and the appropriateness of its linguistic form to its exalted subject matter make it one of the greatest works of the English language—a “repository and edifice of language which towers above its successors”:

For generations, it provided a common stock of references and allusions, rivaled only by Shakespeare in this respect. It resounded in the minds and memories of literate people, as well as of those who acquired it only by listening. From the stricken beach of Dunkirk in 1940, faced with a devil’s choice between annihilation and surrender, a British officer sent a cable back home. It contained the three words “but if not …” All of those who received it were at once aware of what it signified. In the Book of Daniel, the Babylonian tyrant Nebuchadnezzar tells the three Jewish heretics Shadrach, Meshach, and Abednego that if they refuse to bow to his sacred idol they will be flung into a “burning fiery furnace.” They made him an answer: “If it be so, our god whom we serve is able to deliver us from the burning fiery furnace, and he will deliver us out of thy hand, O King. But if not, be it known unto thee, O King, that we will not serve thy gods, nor worship the golden image which thou hast set up.”

Indeed, the huge influence of the King James Bible on English is difficult to measure. David Crystal, author of Begat: The King James Bible and the English Language, counts 257 common modern English expressions that derive from it. He admits, however, that he might have missed a few.

As Hitchens points out, the King James Bible not only does, but should inform our speech and thought:

A culture that does not possess this common store of image and allegory will be a perilously thin one. To seek restlessly to update it or make it “relevant” is to miss the point, like yearning for a hip-hop Shakespeare. “Man is born unto trouble as the sparks fly upward,” says the Book of Job. Want to try to improve that for Twitter? And so bleak and spare and fatalistic—almost non-religious—are the closing verses of Ecclesiastes that they were read at the Church of England funeral service the unbeliever George Orwell had requested in his will: “Also when they shall be afraid of that which is high, and fears shall be in the way, and the almond tree shall flourish, and the grasshopper shall be a burden, and desire shall fail: because man goeth to his long home. … Or ever the silver cord be loosed, or the golden bowl be broken, or the pitcher be broken at the fountain, or the wheel broken at the cistern. Then shall the dust return to the earth as it was.”

Hitchens’ point seems to be that a culture formed on the rich language of the King James would be severely diminished by its loss. He was right to worry.

In his book, The Rise and Fall of the Bible, Timothy Beal has his own word picture for the plethora of modern Bible translations that have attempted to displace the KJV, referring to them as “a distressed crop: [as] when a tree is about to die and puts out tons of seeds.”

What exactly is the problem? In the biblical strife of tongues we call modern Bible translations, there has been an attempt to be more “understandable,” and this attempt has taken the form of the systematic elimination of the living metaphors in the original text in favor of the dead abstractions of modern technological speech.

Many Protestants and Catholics have bought into the intellectually debilitating theory that bald abstract prose is a better conduit for truth than living poetic expression. Hitchens calls this an effort to “rinse out the prose”:

When the Church of England effectively dropped King James, in the 1960s, and issued what would become the “New English Bible,” T. S. Eliot commented that the result was astonishing “in its combination of the vulgar, the trivial and the pedantic.” … This has been true of every other stilted, patronizing, literal-minded attempt to shift the translation’s emphasis from plangent poetry to utilitarian prose.

“Utilitarian prose.” That captures the problem exactly. Those who have been linguistically inoculated against it by reading great literature such as the King James Bible can detect it easily. But even those who have little familiarity with exalted language still retain enough of the sense of good English to know it when they hear it.

“At my father’s funeral,” says Hitchens:

As much philosophical as spiritual … this passage was the labor of men who had wrought deeply with ideas and concepts. I now pluck down from my shelf the American Bible Society’s “Contemporary English Version,” which I picked up at an evangelical “Promise Keepers” rally on the Mall in Washington in 1997. Claiming to be faithful to the spirit of the King James translation, it keeps its promise in this way: “Finally, my friends, keep your minds on whatever is true, pure, right, holy, friendly and proper. Don’t ever stop thinking about what is truly worthwhile and worthy of praise.”

Pancake-flat: suited perhaps to a basement meeting of A.A., these words could not hope to penetrate the torpid, resistant fog in the mind of a 16-year-old boy, as their original had done for me.

To say that the best approach to truth is the direct route of bald prose is to assume that what is said can be divorced from how we say it—that style is irrelevant to content. No good writer would say this, any more than a good painter would claim that the colors by which he paints are irrelevant to his picture.

The translators of 1611 wrote with pens of iron and points of diamond. Modern translators write with Word, published by Microsoft.

The King James translators themselves knew the value of evocative language, and it is exemplified in the very prose they used to explain their goal in translating:

Translation it is that openeth the window, to let in the light; that breaketh the shell, that we may eat the kernel; that putteth aside the curtain, that we may look into the most Holy place; that removeth the cover of the well, that we may come by the water, even as Jacob rolled away the stone from the mouth of the well, by which means the flocks of Laban were watered.

Removing the poetry of the Bible, far from making it more understandable, does the exact opposite. Poetic metaphors enable the reader not only to hear, but to see the point of the author. Poetic language, as it is expressed in similes and metaphors, is one of the essential elements of clear writing. And its absence tells. Here’s how the KJV accurately translates the Greek of the passage I Peter 1:13: “Wherefore gird up the loins of your mind ….” Peter is talking in this chapter of the “trial” of faith that every Christian must endure in the “heaviness through manifold temptations” that the Christian experiences. In other words, at least “for a season,” we are to see ourselves in a personal battle against the evil influences of this world. And to express this, Peter uses a word picture of the soldier preparing for war. Here’s the text with which a popular modern translation replaces (not translates) the Greek: “Therefore, with minds that are alert and fully sober…” Truths delivered flatly will appear as flat truths. Action related without inspiration will seem like an uninspired action. 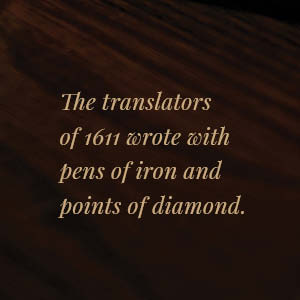 The attempt to cleanse the biblical prose of its poetic elements in the cause of clarity is necessarily misguided. It is equally misguided to maintain that language sterilized of its beauty is somehow more “accurate.”

For one thing, there are no exact translations of the Bible. Every translation is to some extent a mistranslation, since rendering any text from one language to another is by its very nature imprecise. For those desiring a flawless rendering of the Bible there is only one option: the original Greek and Hebrew manuscripts. And anyone who has read them in the original languages will know that the text is a veritable garden of poetic expression.

Had God thought that poetic expression did not serve His purpose, then He would not have used it to communicate His message in the first place.

No one questions that modern translators are competent in Hebrew and Greek. It’s their facility with English that is subject to doubt.

The biblical scholars of the seventeenth century were more generally literate people. The classical education of their day involved a deep study of the Greek and Roman prose and poetic classics, but also involved an intimate acquaintance with English literature. There were literary giants on the earth in those days. This gave them both a deeper and wider exposure to literature than that possessed by the average professor of Greek or Hebrew who staffs the translation committee of a modern Bible translation team.

As Alister McGrath has pointed out, the language of the King James was archaic at the time that it was published. It was archaic on purpose. They knew what Herman Melville knew when he wrote Moby Dick: An exalted subject requires an exalted style; an author should swell to his subject.

We should think carefully about the ultimate effects of the mode of language that we employ in the communication of the Bible’s great truths, not just on ourselves, but on our children, and our children’s children, down to the third and fourth generations.

Even an atheist could understand that.