Classical writings possess a distinctly concise wisdom. Rather than distant relics or dusty artifacts, these treasures instruct our children in our own time. When we want to introduce classical literature, Aesop is a good place to start.

Aesop’s fables have long been considered “the ideal pedagogical vehicle, second only to the Bible when it comes to instructing young people in morality.”¹ They offer wise counsel from an unusual source: common animals. A sheep, fox, mouse, or tortoise convey messages our children need to hear.

Aesop’s fables provide a good beginning in a classical education for any child, but for a child on the autism spectrum, or for any teen who lacks discernment, Aesop’s disarming lessons are especially valuable. For example, Aesop’s fables can provide instruction in social maturity and self-protection, as in The Cat & the Old Rat: “The wise do not let themselves be tricked a second time.” From The Mother & the Wolf we learn, “Do not believe everything you hear.” Sometimes the truth is more palatable when heard from animals. For this reason, the overzealous teen may heed the admonition, “Stick to your trade,” (The Wolf & the Donkey) as he contemplates the tasks or vocations for which he is best suited. A child of any age who struggles with special needs may feel consumed by his own challenges, yet with Aesop’s The Hares & the Frogs he can remember this: “No matter how unfortunate we may think we are, there is always someone worse off than ourselves.”

We weave Aesop’s fables through our Simply Classical teaching resources. In Level C: Animals, Alphabet, & Aesop, our young children hear these stories for the first time. In Myself & Others, older students listen to Aesop’s fables again and reflect on them. They copy the moral lessons in the Aesop Copybook. In all that we teach we seek to impress moral lessons of truth and wisdom upon our children’s hearts and minds. As Quintilian says,

I would urge that the lines, which he is set to copy,
should not express thoughts of no significance, but
convey some sound moral lesson. He will remember
such aphorisms even when he is an old man, and the
impression made upon his unformed mind will contribute to the formation of his character. ²

Consider The Lion and the Mouse. A great Lion thinks himself too great to need the help of a tiny Mouse. Many would deem the Mouse to be of little usefulness. The Mouse might himself wonder if he could ever help anyone. Yet in this fable, the tiny Mouse comes to the great Lion’s aid:

The Lion and the Mouse 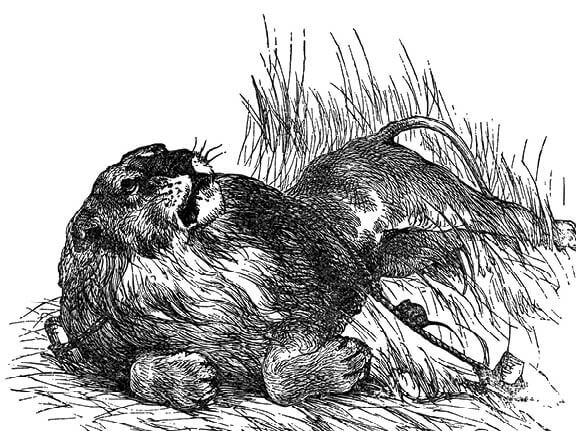 A Lion lay asleep in the forest, his great head resting on his paws. A timid little Mouse came upon him unexpectedly, and in her fright and haste to get away, ran across the Lion’s nose. Roused from his nap, the Lion laid his huge paw angrily on the tiny creature.

“Spare me!” begged the poor Mouse. “Please let me go and some day I will surely repay you.” The Lion was much amused to think that a Mouse could ever help him. But he was generous and finally let the Mouse go.

Some days later, while stalking his prey in the forest, the Lion was caught in the toils of a hunter’s net. Unable to free himself, he filled the forest with his angry roaring. The Mouse knew the voice and quickly found the Lion struggling in the net

Running to one of the great ropes that bound him, she gnawed it until it parted, and soon the Lion was free. “You laughed when I said I would repay you,” said the Mouse. “Now you see that even a Mouse can help a Lion.”

No kindness, no matter how small, is ever wasted.

We know the story is make-believe, but we are encouraged nonetheless. The lessons give us moral reference points with examples, so we can react wisely and graciously to situations in everyday life. Study Aesop with children and you will provide a beginning course in truth and virtue.
When I introduced Aesop to my children in our home, I re-introduced Aesop to myself. Stunned by the rebukes and equipped by the reminders, I found myself reading “after school” beyond the assigned lessons. Wisdom for work, neighbors, enemies, friends, and personal integrity springs forth with surprising penetration. Homeschooling parents or classroom teachers who strive to do more than can be accomplished in a day would do well to heed this reminder that sensible, patient restraint yields far more:

The Boy and the Filberts

A certain boy put his hand into a pitcher where a great plenty filberts were deposited. He grasped as many as his fist could possibly hold, but when he endeavored to pull it out, the narrowness of the neck prevented him. Unwilling to lose any of them, but unable to draw out his hand, he burst into tears and bitterly wailed about his bad fortune. An honest fellow, who stood by, gave him this wise and reasonable advice: “Grasp only half the quantity, my boy, and you will easily succeed.”

Do not attempt too much.

The moral in all of this, for young and old alike, is: Aesop’s fables give us all a good beginning in wisdom!