My brother and sister and I all received a classical education, way back in the 1970s, because my mother homeschooled us the same way she’d been taught at home.

Our education was language-centered, not image-centered; we read and listened and wrote, but we rarely watched. She spent the early years of school giving us facts, systematically laying the foundation for advanced study. She taught us to think through arguments, and then she taught us how to express ourselves.

This is the classical pattern of the trivium, the three-part process of training the mind. 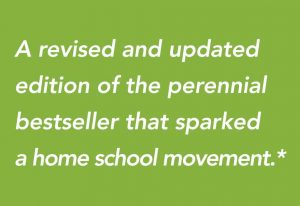 The first years of schooling are called the “grammar stage”—not because you spend four years doing English, but because these are the years in which the building blocks for all other learning are laid, just as grammar is the foundation for language. In the elementary-school years—roughly grades 1 through 4—the mind is ready to absorb information. Since children at this age actually find memorization fun, during this period education involves not primarily self-expression and self-discovery, but rather the learning of facts and training in basic thinking skills: rules of phonics and spelling and how to use them, rules of grammar and understanding good sentence structure, poems, the vocabulary of foreign languages, the stories of history and literature, descriptions of plants and animals and the human body, how numbers work and the basics of mathematical thinking—the list goes on.

Somewhere around fourth or fifth grade, children begin to think more analytically. Middle-school students are less interested in finding out facts than in asking, “Why?” The second phase of the classical education, the “logic stage,” is a time when the child begins to pay attention to cause and effect, to the relationships among different fields of knowledge, to the way facts fit together into a logical framework.

A student is ready for the logic stage when the capacity for abstract thought begins to mature. During these years, the student begins the study of algebra and applies mathematical reasoning to real-life situations. She studies the rules of logic, and begins to apply logic to all academic subjects. The logic of writing, for example, includes paragraph construction and support of a thesis; the logic of reading involves the criticism and analysis of texts, not simple absorption of information; the logic of history demands that the student find out why the War of 1812 was fought, rather than simply reading its story; the logic of science requires the child to learn and apply the scientific method.

The final phase of a classical education, the “rhetoric stage,” builds on the first two. At this point, the high-school student learns to write and speak with force and originality. The student of rhetoric applies the rules of logic learned in middle school to the foundational information learned in the early grades and expresses her conclusions in clear, forceful, elegant language. The student also begins to specialize in whatever branch of knowledge attracts her; these are the years for art camps, college courses, foreign travel, apprenticeships, and other forms of specialized training.

A classical education is more than just a pattern of learning, though. First, it is language-focused: learning is accomplished primarily through words, written and spoken, rather than mostly through images (pictures, videos, and television). Why is this important? Language learning and image learning require very different habits of thought. Language requires the mind to work harder; in reading, the brain is forced to translate a symbol (words on the page) into a concept. Images, such as those on videos and television, allow the mind to be passive. In front of a video screen, the brain can “sit back” and relax; faced with the written page, the mind is required to roll its sleeves up and get to work.

Second, a classical education follows a specific three-part pattern: the mind must be first supplied with facts and images, then given the logical tools for organization of those facts and images, and finally equipped to express conclusions.

Third, classical education strives for mastery in the skill areas, but discovery and exploration in the content areas. Skill areas are those parts of the curriculum that give the student tools for learning: grammar, phonics and spelling, the mechanics of sentence and paragraph construction, mathematical operations (from addition to complex equations), basic concepts in science. Skills are developed in a prescribed sequence, each step building on the one before; addition and subtraction come before multiplication and division, comma use is mastered before compound-complex sentences are addressed. Workbooks and textbooks are valuable for building skill areas.

Content areas are literature, history, the sciences, mathematical thinking and understanding, written composition, art, music—fields of study that are open-ended and that can’t be “mastered.” Students will never learn all of history or science or read all of the great books. In these content areas, there is room for students to choose their own direction, to develop a deep and narrow expertise or a broader, wider knowledge, to tailor their study to their interests. When possible, we steer away from textbooks in the content areas, and toward collections of “living books”—books written by single authors, exploring particular issues and ideas.

Fourth, to the classical mind, all knowledge is interrelated. Astronomy, for example, isn’t studied in isolation; it’s learned along with the history of scientific discovery, which leads into the church’s relationship to science, and from there to the intricacies of medieval church history. The reading of the Odyssey allows the student to consider Greek history, the nature of heroism, the development of the epic, and humankind’s understanding of the divine. This is easier said than done. The world is full of knowledge, and finding the links between fields of study can be a mind-twisting task. 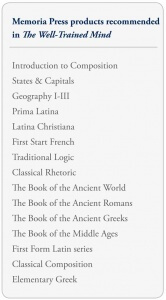 A classical education meets this challenge by taking history as its organizing outline—beginning with the ancients and progressing forward to the moderns in history, literature, art, and music—and by connecting the history of scientific discoveries to the study of scientific principles whenever possible.

Classical education is, above all, systematic—in direct contrast to the scattered, unorganized nature of so much secondary education. This rigorous, systematic study has two purposes.

First, rigorous study develops virtue in the student: the ability to act in accordance to what one knows to be right. Virtuous men or women can force themselves to do what they know is right, even when it runs against their inclinations. Classical education continually asks a student to focus not on what is immediately pleasurable (another half hour of TV or computer game, for example) but on the steps needed to reach a future goal—mastery of vital academic skills.

Second, systematic study allows the student to join what Mortimer J. Adler calls the “Great Conversation”: the ongoing conversation of great minds down through the ages. Much modern education is so eclectic that the student has little opportunity to make connections between past events and the flood of current information. “The beauty of the classical curriculum,” writes classical schoolmaster David Hicks, “is that it dwells on one problem, one author, or one epoch long enough to allow even the youngest student a chance to exercise his mind in a scholarly way: to make connections and to trace developments, lines of reasoning, patterns of action, recurring symbolism, plots, and motifs.”

Susan Wise Bauer is an author, English instructor of writing and American literature at The College of William and Mary, and founder of Peace Hill Press. She holds a Master of Divinity from Westminster Theological Seminary in Philadelphia, PA, a Master of Arts in English and a Ph.D. in American Studies from The College of William and Mary. She received her B.A. from Liberty University. She has been a member of the English faculty at William and Mary since 1993. She is the author of The Well-Educated Mind: A Guide to the Classical Education You Never Had, a guide to reading the great books published by W. W. Norton (2003); a four-volume world history series for children, The Story of the World, published by Peace Hill Press, and much more!