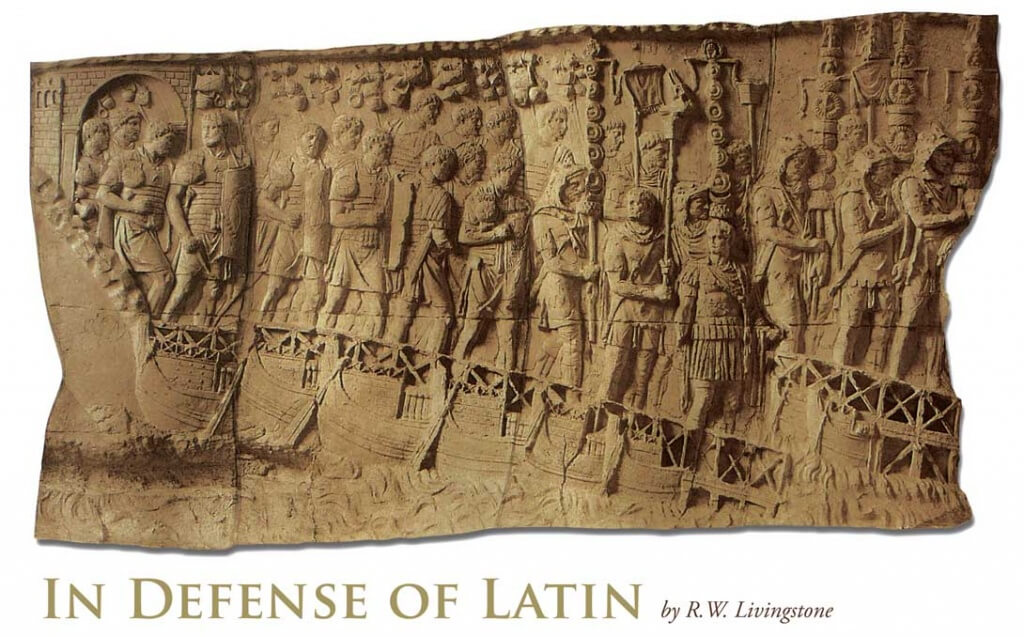 Some critics have said that the value of Roman literature is that it has been the vehicle which conveyed Greek ideas to the world. The Romans took their art and, as far as their civilization rests on these, their civilization from Greece.

Why, then, do we study Latin? Some of the reasons are given by Cicero in a passage where he sums up the excellences of Greece and Rome and declares the grounds on which his country has a claim to be considered great:

Our mastery of character and of national life, of family, and of the home is far higher and nobler than theirs; our ancestors devised for the state an indubitably better system of laws and institutions. Or again, take the art of war and think what Rome has achieved in individual heroism and even more in collective discipline. In these achievements, which depend not on literary gifts but on character, neither Greece nor any other people can be compared to us. Where will you find a sense of dignity, a resolution of purpose, a loftiness of spirit, a feeling of truth and honor which can be matched with old Rome?

In fact, Cicero allows intellect to Greece but claims character for Rome. Shelley has expressed the same thought with a poet’s imagination: “The true poetry of Rome lived in its institutions; for whatever of the beautiful, true, and majestic they contained could have sprung only from the faculty which creates the order in which they consist.” If nothing moves in the world but what is Greek, it is almost true to say that nothing stands but what is Roman. Combine the two and you have the strength of Rome without its hardness, the glory of Greece without its instability, and (what is important for education) you have perfect models of two sides of human nature, which, in union, go to make the perfect man and state.

Before Rome became mistress of the world, Europe had never found a way of combining liberty with order. Greece had propounded a theory of politics, but had been singularly unsuccessful in creating a stable, large-scale state—the imperial power of Athens lasted sixty years, that of Sparta and of Thebes even less. Such is the record of Greek political achievement. The empires of Alexander’s successors were equally unable to discover the secret of permanence. But while these empires and monarchies successively formed and broke up as rapidly as the eddies in a weir pool come into being and dissolve, a small town in Italy was leading a struggling existence in the middle of powerful tribes. Sometimes she was victorious, sometimes she bought off the enemy, once or twice she was almost destroyed. In the end, after continuous warfare, she gained a precarious supremacy in south and central Italy and turned her eyes across the seas. Two hundred years more of fighting were added to her wars in Italy, and she emerged practically the mistress of the world, with a strong organization and sounder statecraft than had yet been known.

In these early struggles, a character was formed that never lost traces of its origin, which is betrayed in the favorite Latin adjectives: fortis, strenuus, constans, diligens, firmus, verecundus, castus, prudens, gravis, assiduus, and sedulus. Hard necessity taught the Roman to prize these qualities. He became brave, stubborn, and honest because otherwise he would have been destroyed. He learned the art of statesmanship and compromise because he had either to avoid civil war or perish. He avoided vice because there was no leisure to be vicious. He was not luxurious because he had no means of making money. All this became second nature to him. That is why Quintilian says, rather unjustly to Greece, “Graeci praeceptis valent, Romani exemplis” (The Greeks tell us, the Romans show us, how to live).

The common characteristic is a deep sense of something which perhaps we can best express by the word “character.” Greece has indeed done more for morals than any force except Christianity, but she has done it by appealing to the reason, by making men think. Her gnomai (proverbs) are generally thoughts on life rather than direct moral precepts. But the Roman maxims are direct injunctions, as peremptory and practical as the Ten Commandments, the orders of a commander-in-chief on the battlefield of life. Greek takes us into the world of thought; in Latin, we live with a heroic race, “the commonwealth of kings, the men of Rome.”

Like Aeneas in the lower world, we move among illulstres animae, splendid souls. Cincinnatus fetched from the plough to be chief magistrate of Rome; Valerius who, dying as consul, did not leave enough money to pay for his funeral; and Regulus, refusing to be exchanged for Carthaginian prisoners and himself opposing it in the Senate because “they are young and valuable generals, while I am an old and broken man” and going back to Carthage to torture and death.

These iron characters at times are harsh and terrible, but they supplied the inflexible will, which carried the Romans through defeats and disasters to the empire of the world. Cato, the great Roman statesman, was a hard man—hard to foreigners, hard to his countrymen, and hard to himself. There were, however, two people in the world to whom he was not hard. “He said that he that beat his wife or child,” Plutarch recounts, “did commit as great a sacrilege as if he polluted or spoiled the holiest things of the world; and he thought it greater praise for a man to be a good husband than a good senator.”

Roman literature contains, not by any means all the human virtues, but all the virtues which make great nations. “Do not think,” said Cato, rebuking the degeneracy of his own day, “that our ancestors made Rome great by their arms …. There were other things which made them great: industry at home, just government abroad, and a free mind in counsel, the slave of neither passion nor crime.” Deep reverence for the family and for the woman as mother of the family, self-control, self-sacrifice, the sternest sense of duty, unrelenting determination, dauntless courage—Rome offers us examples of all of these in abundance.

But what does the Latin language itself, its grammar as well as its great authors, have to do with this vigorous and virtuous Roman character? And why should we study grammar in Latin or  Greek, rather than English or French? No doubt it can be done in the modern languages, but they have certain disadvantages. In English, at any rate, grammar study is artificial; we know the language already and have no real need to dissect it, while in Latin we must master the grammar in order to understand the language at all, and the study is therefore spontaneous.

And if our object is to train exactness of thought, modern languages are far inferior to Latin, which has in a unique degree no modern language exhibits, a logical quality. The Latin here, if nowhere else, was an intellectual. He disciplined his thought as he disciplined himself; his words are drilled as rigidly as were his legions and march with the same regularity and precision. Modern languages, and English most of all, are lax and individualistic; in our grammar, as in our politics, we are non-conforming, dissenting, lenient to passive resisters and conscientious objectors—we have almost as many exceptions as rules. Our way is interesting and has its merits—more perhaps in life than in language. For in the ideal language, law is supreme; reason governs its grammar and the expression is exactly measured and fitted to the thought it expresses. Latin is such a language.

No other language, least of all a modern language, has this rigid logical cast. Greek does not have it. From Greek we learn a different kind of accuracy; for example, it is less logical, but more sensitive. It is not an overstatement to say that not to know Greek is to be ignorant of the most flexible and subtle instrument of expression, and not to know Latin is to have missed an admirable training in precise and logical thought.

0 thoughts on “In Defense of Latin”