And How They Grew

Once upon a time, in a beautiful valley in central Pennsylvania, there lived two young girls who loved animals, flowers, cooking, gardening, painting—and books. And writing. And music. Oh, and also sitting around having deep conversations with friends and going on walks in the countryside. At least this is how we are tempted to begin this story of Abigail and Hannah Lashbrook, two of Memoria Press’ online students.

You don’t have to delve too deeply into conversation with Abbi and Hannah to realize how interested they are in just about everything. In fact, it is hard to imagine how they manage to do all the things they do. “My very favorite thing to do,” says Abbi, “is to draw in my sketchbook and paint with my beloved Winsor and Newton watercolors. I also love to be outside in the garden and have always been fascinated in studying plants, particularly wild flowers, edible wild plants, and culinary herbs. I’m very fond of long, rambling walks through our beautiful Pennsylvania countryside, and I enjoy cooking, especially when I’m using the fruits of my garden or trying a new French or Italian recipe.”

“I’ve been playing the piano for years,” adds Hannah, “and enjoy pounding out Beethoven’s Pathetique on a dark and stormy afternoon; I play for church and weddings on occasion. I love to garden (I’m partial to growing vegetables, especially brussels sprouts, which I find most poetic for some reason), and just sit outside and listen to the birds. I love, love, love to sit around with friends and have a good, deep conversation.” And then there are books. Hannah began collecting them several years ago. “If I don’t start curbing myself, soon there will be no walking space in the bedroom.” When she is tired from a long day at work, she likes sitting down with a cup of coffee and writing a story. “Reading a good book is paramount to the perfect way to spend an evening.” Abbi too has the book bug, loving “all genres, but particularly philosophy, theology, and classics.”

When they were young, their parents were impressed with the children of homeschooled families they had met. “They wanted their own children to have the same character-building and God-honoring learning, so they decided to homeschool us.” When they were ages eleven and nine, respectively, they decided they wanted to learn Latin. They asked their mom if they could study Latin, and she picked out Latina Christiana, which they used to teach themselves. “We have fond memories of sitting on our bed together, quizzing each other on the vocabulary lists and listening to the Lord’s prayer in Latin!” 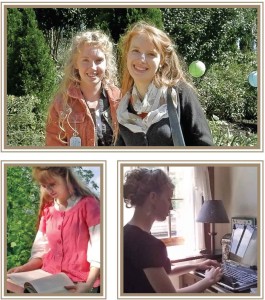 The grounding in Latin was not only fun, says Abbi, but a great basis for learning in general. “The pursuit of Latin that Latina Christiana began in us has been tremendously helpful in all of our other studies; Latin phrases, terms, and derivatives seem to turn up everywhere you look—from Latin botanical names to Latin quotes in Dickens’ novels. The study of Latin also helped to develop good study habits and more than amply prepared us to be comfortable studying other languages, particulary Koine Greek, which bears many grammatical similarities to Latin. And since Latin is a root language for French, Italian, and Spanish, a benefit of studying Latin is that you can often understand words or even phrases in those languages simply from having a Latin vocabulary! And in case those benefits aren’t enough, we also noticed that the necessary study of grammar, in order to be able to construct Latin sentences, was helpful in better understanding the place of grammar in our own English language.”

Between rescuing collies from what Abbi describes as “certain doom” at the animal shelter at their Collie Rescue Center and sitting in the sun reading C. S. Lewis, the girls have somehow found time to study First Start French and Traditional Logic. “We had done two informal logic books before starting Traditional Logic,” says Hannah, “but I wish we had done this one first. It would have made properly understanding all the arguments in the other books so much easier, as well as giving a strong foundation for not only understanding logic, but using it in our own lives.”

The girls’ mother, Amy, surrounded the girls with books and encouraged them to read and to pursue their interests. Their father helped them with their math. But when they were 13 and 15 their father died, leaving much more for Amy to do. The girls themselves took up the slack and began to use many of these programs to teach themselves.

But the girls say that they still like having a teacher and the interaction with other students, which they have gotten through Memoria Press’ Online Classical Academy. They have taken several different English classes, Government, and Senior Thesis. “The English IV class completely changed the way I read and evaluate literature,” says Abbi. “Before I took that class, I enjoyed reading immensely, and read voraciously; but I had never been taught how to really study a book in order to have mastery of its contents. Learning how to detect the author’s foundational philosophies and how to understand his writings in light of that foundation in English IV has transformed the way I read a book; it makes my comprehension level so much deeper.”

Hannah too was led to a deeper understanding of the books she loves. “The English IV class was more than the sum ofits parts. I think we both initially went into the class simply expecting it to be a great way to study those particular works of literature, in-depth. But by the end of both semesters, we had gotten so much more out of it than just knowing what those books were about: we were given a passion for seeing life as a whole. We had seen how the scattered puzzle pieces of life fit together to make a complete picture, as articulated through literary masterpieces. Both the Christian author who sees life as a light at the end of a tunnel, and the despairing atheist who doesn’t even believe there is a tunnel, have contributed to our literary history, and we can use those works combined together to see how Christ is truly in the center of everything. Before I took this class, I read classics because I enjoyed them. Now I read them because I realize that God uses absolutely everything in this world to give us a better understanding of Him, and that we would be missing out on a huge (and very delightful) part of that understanding if we didn’t delve into literature.”

The girls are now homeschool graduates and are helping their mother teach their younger siblings: Elijah, Emma, and Eliza. Abbi says her goal in life is simply to honor God. “I desire to be an accomplished homemaker, capable of maintaining a home that is beautiful, serene, and filled with the light of God’s Word. I plan on continuing to study books and learn new things for the rest of my life; it seems to me that only just now, since I have completed my ‘formal’ schooling, am I really beginning to learn!”

Hannah too has plans. “I want people around me to realize that I have a hope that is founded on the Lord Jesus Christ, because of who He is and what He has done for us, and that nothing that happens in this life can take that hope away. I wish to serve Him in whatever way He deigns best, and I look forward to seeing what He has in store for me as life unfolds. I have a deep passion to be a part of saving our Western Civilization from the moral and cultural corruption that is engulfing it from the inside out by studying English and literature more and learning how to be an effective writer. I would love to write stories, especially children’s stories that can recapture an essence of innocence and wonder that many children today have lost.”

And that is our story of Abigail and Hannah, and their mother and three siblings, as well as their collie. And two cats. And two rabbits. Along with three chickens. Not to mention “lots of chipmunks.”

One thought on “The 5 Little Lashbrooks and How They Grew”